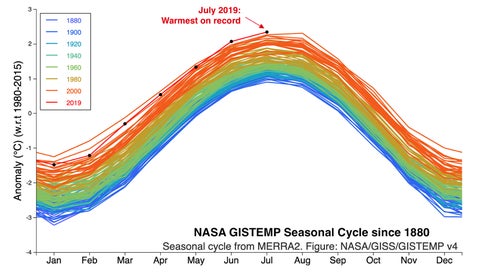 One of the contributing factors Jeff Berardelli cited for the record was the record heat wave in Europe.  He also mentioned record heat in Greenland and Alaska.  I haven't written about either until now, but the resulting record melting of the ice sheet is an event I need to cover here.  Also, my wife and I have a friend in Alaska who has been telling us about how hot the state has been this summer.  It's been warmer there than in here in Detroit, which fits Berardelli's observation that the U.S. Midwest has been either average or cooler than average this summer.  It's one of the ironies that one of the countries most responsible for greenhouse gases is feeling less of their effects and therefore not being prompted to act.

I have two things to say before I return to correcting papers.  First, welcome to the 400 ppm world.  Second, are you scared enough by climate change?  My readers should be.