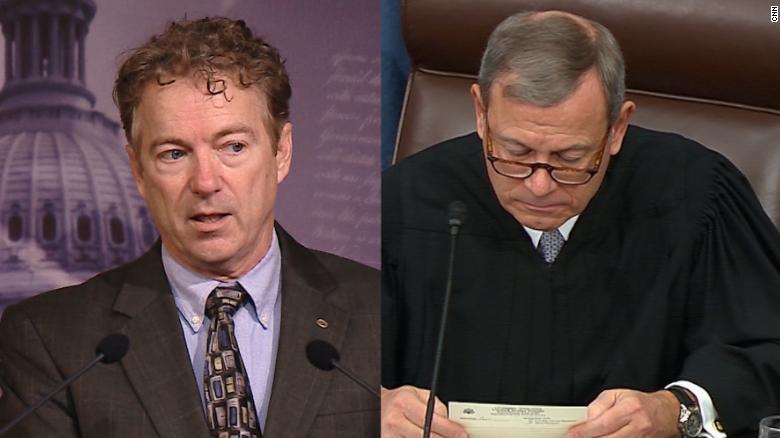 Chief Justice John Roberts on Thursday publicly refused to read a question from Sen. Rand Paul of Kentucky during the Senate impeachment trial that named the alleged Ukraine whistleblower.

"The presiding officer declines to read the question as submitted," Roberts said after receiving the question card.

Paul had expressed frustration with Republican leadership during the trial Wednesday night after it was made clear Roberts would not read his question that named the alleged Ukraine whistleblower, sources with knowledge of the situation said.
...
There have been several other whistleblower questions, some that even included identifying information, which Roberts has read. It's the alleged name itself that is his red line, sources said.

That wasn't all.  Charles Pierce of Esquire then reported what happened next.

Amazingly, Paul left the chamber and almost immediately called a press gaggle to take issue with what Roberts had done. From the Lexington Herald-Leader:

Paul immediately left the Senate floor and headed to a hastily-arranged press conference in a packed studio one floor above the chamber, where he read his question out loud himself and disparaged Roberts’ “incorrect finding.”

In other words, Paul outed someone he thinks was the whistleblower to the press and public after Roberts specifically refused to do so in the Senate chamber. This takes big clanging brass ones.

All this reminds me of another Vox video from last year that foreshadowed what came to pass during the impeachment trial, How America fails its whistleblowers.

If a whistleblower goes to the media with classified information, that’s illegal. And since the Obama administration, it’s become common for the government to prosecute people who do it by charging them under a law from 1917 that was originally intended to prosecute spies for helping foreign governments. If a whistleblower files a complaint through internal channels instead, the complaint has to go through the head of the intelligence community before it can see the light of day—and after that, there are few protections against disclosing the whistleblower’s identity, and only weak recourses against retaliation.

In August 2019, a CIA officer filed a complaint about an alleged quid pro quo between President Trump and the President of Ukraine. The complaint made it to Congress, and kicked off impeachment proceedings. But the existing laws don’t guarantee that this whistleblower will be protected, either.

Just as Ezra Klein's predictions about impeachment being the ultimate loyalty test are coming to pass, so are the concerns expressed in this video.  As Pierce of Esquire wrote in the article I quoted above:

The whistleblower, whoever he or she is, is now in more danger than was the case when he first came forward anonymously. A good portion of the United States Senate apparently doesn’t care whether he lives or dies. The peril becomes even greater when you factor in the Republicans in the House, and the reckless gnomes of the conservative media.

I second this emotion.
Posted by Pinku-Sensei at 7:11 PM