Wave good-bye to Williamson as she drops out 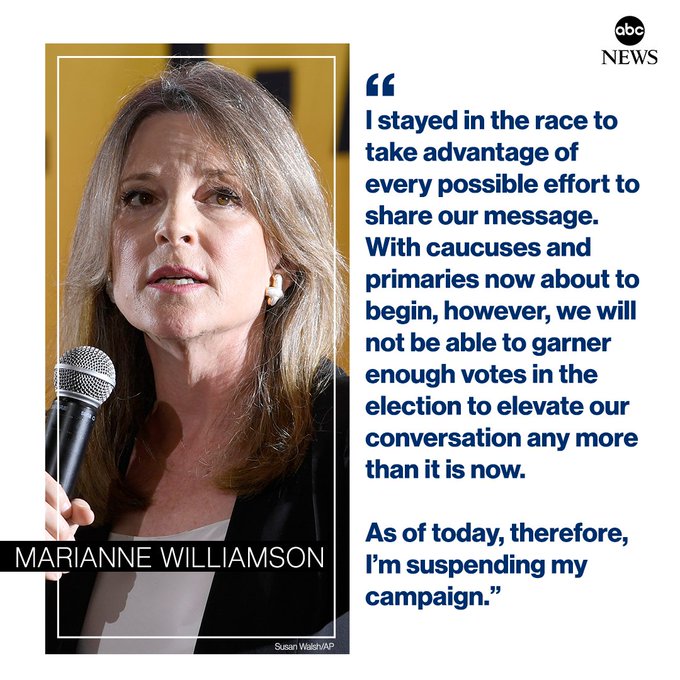 When Julian Castro dropped out last week, I summarized the status of the remaining candidates picked in FiveThirtyEight's second drop out draft in November.

Four down, five to go.  In order of likelihood of suspending their campaigns, FiveThirtyEight listed the remaining five as Cory Booker, Marianne Williamson, Michael Bennet, Tom Steyer, and Amy Klobuchar.  I'd prefer Bennet get out next, but I'm afraid it will be Booker.

It ended up being neither my hope nor my fear.  Instead, Newsy reported Marianne Williamson ends presidential bid about an hour ago.

The best-selling author had struggled to gain more than 1% support in the polls since beginning her campaign in early 2019.

If Bennet isn't dropping out, then it may as well be Marianne; I didn't think Williamson had a serious chance from the get-go.  Neither did FiveThirtyEight.  Here's what they said about her likelihood of dropping out in November.

geoffrey.skelley: So unlike Castro and Booker, my pick is someone who may not be thinking about her political future: Marianne Williamson. And her exit comes down to money, in my mind.

geoffrey.skelley: She had about $700,000 in the bank at the end of the third quarter, and a burn rate of nearly 90 percent. This makes me wonder if she can keep things going. I know she has a lot of small-donor potential, but we also haven’t heard her campaign talking about passing debate donor thresholds in a while, either.

sarahf: It does seem as if a lot of the most likely candidates to drop out are the ones with money woes (see O’Rourke, Ryan).

nrakich: And she hasn’t made any debates since the thresholds increased.

geoffrey.skelley: Yeah, the last debate she made was in July. She hit the donor requirements for the September and October debate, but didn’t meet the polling threshold. So it’s hard to imagine her making the November or December debate given that.

nrakich: Yeah, I agree — if Williamson wants to keep running, she’s going to have to run a leaner campaign. We’ll see how much her heart is really set on being president, I guess.

geoffrey.skelley: “Leaner” is probably a good lead-in to some of our next choices, I would guess.

sarahf: I’d argue she had Tulsi-Gabbard energy in terms of building a dedicated following, but I suppose her fan base had its limitations.

With Williamson leaving, half of the women running for President have now dropped out, leaving Elizabeth Warren, Amy Klobuchar, and Tulsi Gabbard.  Time to count to see if half the men have dropped out as well; it certainly seems like it.  After all eight of the original drop-out draft's nine have dropped out and, not counting Bullock and Bennet, who were picked in both drafts, four of the new seven have stopped running as well.  That's 15 out, not counting Swalwell and Gravel, who left the campaign before the first draft.  Seventeen minus three is fourteen, which is more than the eleven men I count as still contending for the Democratic nomination, so more than half the men have dropped out already and the first vote isn't for another month.  The field is thinning out fast.  Five down, four to go.

Follow over the jump for the recipes and memes I'm retiring now that Williamson is waving good-bye to the campaign trail.

I begin with the drink suggestion I made in Drinks for the Democratic debates, Part 2. 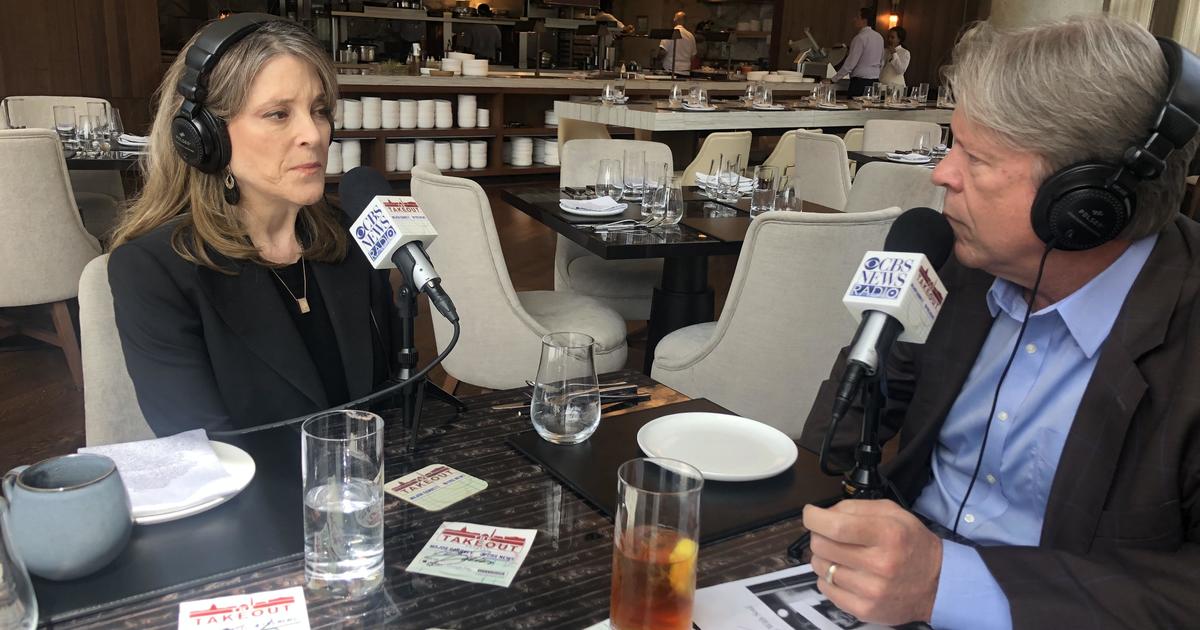 Marianne Williamson told Eater “I have no comfort food.”  After reading a bit about her, I can believe it.  So I'm not going to waste a fun recipe on her.  Instead, I recommend kombucha, which is the only actual drink that showed up in the results when I searched for 'new age guru drink.'

By the way, Williamson has suggested doing different yoga positions instead of playing a drinking game.  Kombucha it is for her.

That's about as much fun as I could have with her in a drinking game.  It wasn't much.

Next, the meme from June's OnTheIssues.org's take on the Democratic presidential candidates from left to center I retired the next month. 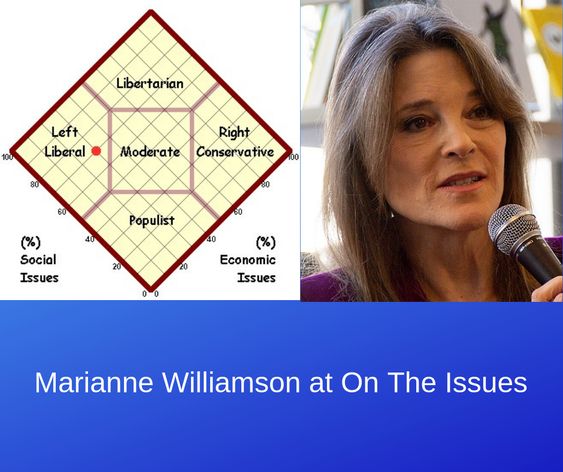 I told my readers above to be patient, as I'd get to Cory Booker, whose stated positions result in his being rated as a lot less liberal economically with a score of 25 than his votes place him on VoteView's scale.  This score ties him on the economic scale with Marianne Williamson.  However, his high social score 80 combined with his more moderate economic score leads On The Issues to consider him a Libertarian-Leaning Progressive.  On the other hand, Williamson's much more centrist social score of 65, which ties her with Klobuchar as the most moderate socially, has On the Issues to rate her as a Moderate Liberal, the only one running for the nomination.

As I wrote above, I retired that graphic in July for On The Issues shows most of the Democratic candidates have moved left during the campaign, too. 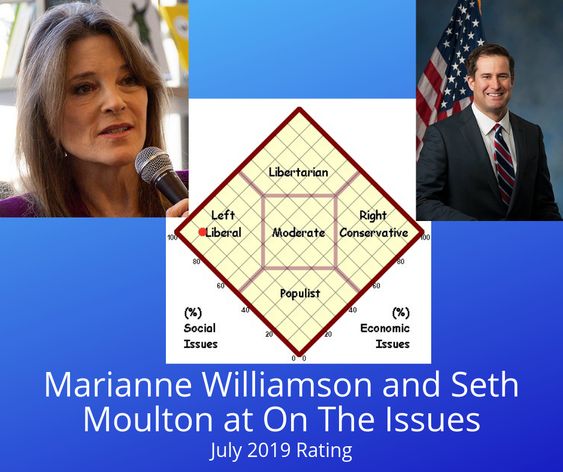 I mentioned that Marianne Williamson's social score changed from 65 to 90; her economic score did as well, moving from 25 to 13.  Combined, this is the largest jump to the left in scores of any Democratic candidate evaluated by On The Issues, a combined total of 37 points to the left on both scales, enough to change her classification at On The Issues from Moderate Liberal to Hard-Core Liberal.  Her ranking rose from seventeenth or eighteenth most liberal candidate to eighth most liberal, even with the addition of Sestak to her left, the largest change in rank as well as score of all candidates.  This move is very similar to what I predict will happen to Messam.

[T]here are a number of issues for which On The Issues has not recorded a position to score, so I expect that Messam's rating and classification might change...In particular, his position is likely to move left, either to Hard Core Liberal or Libertarian-leaning Progressive.

It looks like the same thing happened to Williamson.  Honestly, I'm not that surprised.  I was wondering how someone as out there as she is would be rated as such a political moderate.  I think the perception and the analysis now are in synch.

After Seth Moulton dropped out to run for re-election to Congress instead, I made yet another new meme for Williamson in Democratic candidates continue to drift leftwards according to On The Issues. 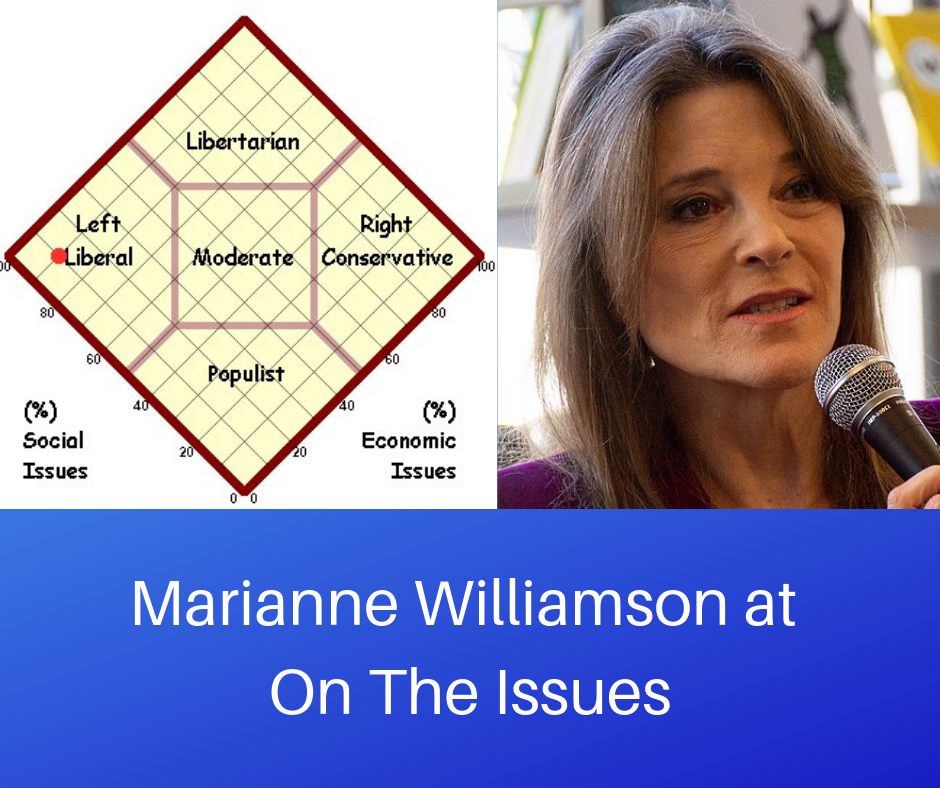 Marianne Williamson has also continued to move to the left, as her economic score is now 10, three to the left of the 13 she rated in July.  Since her social score of 90 is 2 points more liberal than Elizabeth Warren, it places her one place closer to the left end of the spectrum than the Senator from Massachusetts to make her the fourth most liberal candidate in the contest.  As I snarked in a comment to Final Voyage at Kunstler's blog, "I'm not surprised.  Charlie Pierce wrote on Twitter that her campaign was like a lava lamp running for President."