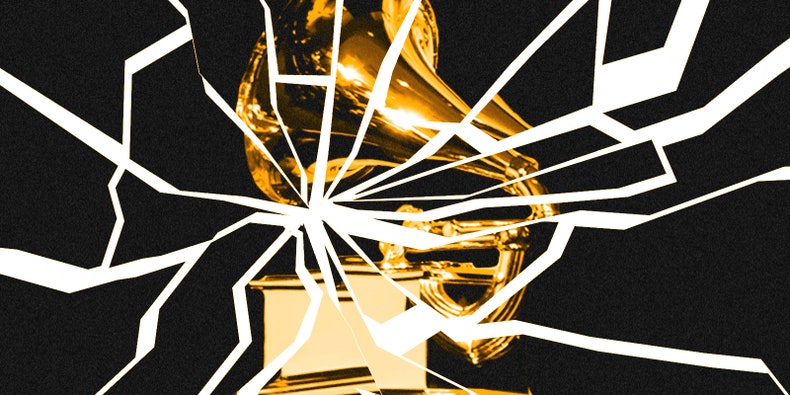 As I've written before about awards shows, both electorates and voting systems matter, most recently in '1917' among movie and TV winners about politics and government from Producers Guild of America (PGA) Awards.  What I've mentioned less is how the selection process matters as well, although I made a big deal of it about the television acting nominees for the Saturn Awards two years ago and examined the topic when I discussed the documentary nominees the past three years.  When I think an awards show has issues with its selection of nominees for (some of) its categories, don't just examine them, I complain!

It turns out that selection of the nominees isn't just a problem for shows that reward movies and television, it's a scandal in the premier music awards show, the Grammy Awards.*  CBS This Morning covered the story, beginning with Suspended Grammys CEO's allegations make waves before awards show.

Just days before the Grammy Awards show, suspended CEO Deborah Dugan’s explosive charges against the Academy are making waves within the music industry. Host Alicia Keys has canceled all interviews and the Academy dropped its ceremonial red carpet rollout, scheduled to happen Thursday. Jamie Yuccas shares how industry professionals are reacting to the fallout.

Not only is Dugan alleging corruption including conflicts of interest, in the selection process, she's calling out the Recording Academy for having diversity issues.  She links the two in the second half of CBS This Morning's report, Suspended Grammys CEO explains why she filed complaint right before awards show.

Days before the 62nd annual Grammy Awards, the suspended CEO of the recording academy is accusing the organization of rigging the voting system. Deborah Dugan says she was put on leave for accusing the Academy’s general counsel of sexual harassment. The Academy says Dugan was accused of creating an “abusive and bulling” environment by a former assistant. Dugan and her attorney, Doug Wigdor, join "CBS This Morning" to discuss the controversy.

While I'm appalled but not particularly surprised by these allegations, I'm glad to hear that she thinks the voting system to choose the winners among the nominees works and that she has faith in the creative members of the Grammy electorate to make the right choices.  The problem is with the nominating committees, where it seems that commercial interests may be influencing the final slates of nominees instead of the vote of the members based on artistic criteria.  As I wrote, I'm not particularly surprised.  After all, it's recorded music that's known for payola scandals, not movies.

This isn't just an issue for awards shows.  FiveThirtyEight included the role of selection in There Has To Be A Better Way To Pick Presidential Nominees … Right?  Sometimes, the selection of candidates determines the winners of elections before they even take place.  As I wrote, not only do electorates and voting systems matter, so does the selection of nominees.  This is as true for political offices as it is for entertainment awards.

*When I mentioned the Grammys as a topic I considered but abandoned for Sunday's entertainment feature, writing Samantha Bee on the first week of Trump's impeachment trial instead, I was thinking about listing the nominees that touched on politics and government.  I wasn't considering this scandal — at least not yesterday.  What a difference a day makes!
Posted by Pinku-Sensei at 8:28 PM