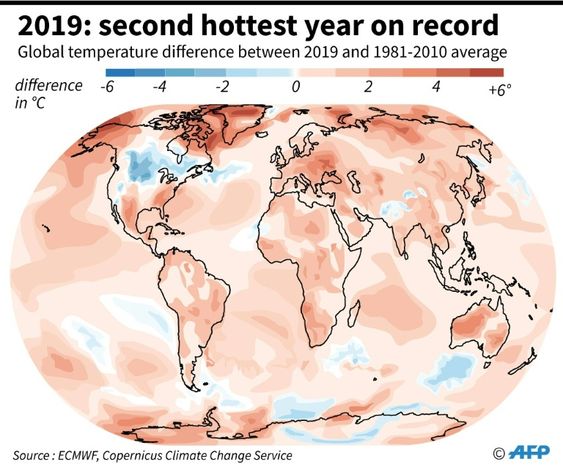 Back in February of last year, I wrote "2019 could be the hottest year ever because of El Nino."  Halfway through the year, that was still a possibility when July 2019 became the hottest month on record.  However, 2019 ended up bearing out another prediction of mine from Carbon dioxide hits another record at 415 ppm that I repeated in Record heat wave in Europe begins summer 2019.


My prediction that 2019 would be a warmer year than 2018, which was the fourth warmest on record, looks like it will come true, although the planet is not on track for it to beat 2016 or 2017.  Instead, 2019 appears to be on track to become the third warmest year ever.  Welcome to the 400 ppm world.

Based on research by Copernicus Climate Change Service (C3S), 2019 beat not only 2018, but also 2017, as 2019 was the second warmest year and the last five years were the warmest on record.


The Copernicus Climate Change Service (C3S) announces today that 2019 was the fifth in a series of exceptionally warm years and the second warmest year globally ever recorded. Meanwhile, Europe saw its warmest year on record by a small margin. Together with the Copernicus Atmosphere Monitoring Service (CAMS), C3S also reports that CO2 concentrations in the atmosphere have continued to rise. Their data provide the first complete, global picture of 2019 temperatures and CO2 levels. The results are in line with previous projections from WMO and the Global Carbon Project (GCP) for 2019. The WMO estimated that 2019 was likely to be the 2nd or 3rd warmest year on record, while both WMO and the GCP indicated that atmospheric CO2 concentrations had continued to increase.
...
The temperature dataset provided by C3S shows that the global average surface air temperature was 0.04 °C lower than in 2016, the warmest year on record.

Back to the press release.


The data also show that:
Furthermore, according to satellite measurements of global atmospheric CO2 concentrations:
The most pronounced warming compared to the 1981-2010 average occurred in Alaska and over other large parts of the Arctic. Most land areas were warmer than average, especially eastern and southern Europe, southern Africa and Australia. In contrast, central and south-eastern Canada experienced below average annual temperatures.

In Europe all seasons were warmer than usual, with the summer and autumn being the fourth warmest on record. None of the seasons was record-breaking in terms of average temperature, but Europe nevertheless saw its warmest calendar year on record, marginally ahead of 2014, 2015 and 2018. A more detailed analysis of the climate in Europe will be presented by Copernicus in its European State of the Climate 2019, which is set to be released in April.

Here's a graph showing the average temperature for the past 150+ years.

I close out my quoting of the press release with a pair of perceptive quotes.


“2019 has been another exceptionally warm year, in fact the second warmest globally in our dataset, with many of the individual months breaking records”, says Carlo Buontempo, Head of the Copernicus Climate Change Service (C3S). “The C3S temperature dataset for 2019 is the first complete set to be published including annual anomalies and globally averaged fields. This is possible because we are an operational programme, processing millions of land, marine, airborne and satellite observations daily. A state-of-the-art computer model is used to bring all these observations together, in a similar way to how weather forecasting is carried out.”

Jean-Noël Thépaut, Director of ECMWF Copernicus comments: “The past five years have been the five warmest on record; the last decade has been the warmest on record: These are unquestionably alarming signs. Seeing one or more months much warmer than the recent reference period can be disconcerting but does not as such represent a climate trend, as monthly temperature deviations vary, and some regions may show below average conditions for a while. We produce data with full global coverage of temperature every day and publish monthly and annual summaries based on this dataset that currently goes back to 1979. For determining possible long-term trends related to climate change, observations dating long into the past are invaluable. Therefore, we also compare our data with climate data dating back to the pre-industrial era to ascertain these long-term climate trends.”

Even The Daily Mail recognized that the 2010s were the hottest decade on record a month ago, when they created the following preview image for an article on the subject. 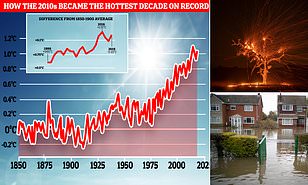 I'm going to a good environmentalist and close this entry out by recycling what I wrote in August.


First, welcome to the 400 ppm world.  Second, are you scared enough by climate change?  My readers should be.