When Cory Booker dropped out, I was hoping Michael Bennet would drop out next.  That didn't happen and I'll probably have to wait until at least Monday night after the Iowa Caucuses, as four candidates bid farewell after Iowa four years ago.  Instead, it was someone not chosen in FiveThirtyEight's second drop out draft in November but who probably should have been, John Delaney.  The Hill reported BREAKING: John Delaney drops out of presidential race, Krystal and Saagar react yesterday.

That's the analysis, which I embedded first because it would make for a better preview image on social media.  I get most of my page views via social media, especially Facebook, and I have to consider how my posts look there.

For the complete clip of Delaney dropping out, watch CNN's John Delaney drops out of 2020 race

Democratic candidate John Delaney tells CNN's John Berman that he is withdrawing from the 2020 presidential race.

Delaney is definitely picking the right candidates with moderate reputations for his few supporters to consider, at least among those competing in Iowa, Joe Biden, Amy Klobuchar, and Pete Buttigieg.  If Michael Bloomberg and Deval Patrick were competing there, he might suggest them, too.  That's not a recommendation that reflects my preferences.  As I wrote on the comments to Drinks for the Democratic debates, Part 2, I am supporting more liberal candidates.


I like Bernie. In fact, I voted for him in the Michigan primary three years ago and had both a lawn sign and a car magnet advertising him. I helped contribute to his surprise victory in the Michigan primary. However, I voted for Bernie for two other reasons than his actual stands on the issues. First, he was a stand-in for Elizabeth Warren, who I liked even better, but wasn't running in 2016. Second, I really did not like the idea of the nomination process being a coronation of Hillary; I thought she had to earn that nomination, not coast to it. Neither of those apply this year, so I'm supporting Harris, Warren, and Inslee, in that order.

With both Kamala Harris and Jay Inslee out of the race, I'm backing Elizabeth Warren, for now.  I just hope she doesn't drop out before the Michigan primary on March 10th.  My wife and I haven't decided on who our second choice is among the remaining candidates.

Speaking of Warren, she showed how Krystal Ball of The Hill was right about how Democrats weren't buying what he was selling in the first debate.  Watch Politico's clip of that moment, Elizabeth Warren asks John Delaney: Why even run for president?

During the first night of the second Democratic debates in Detroit, Senator Elizabeth Warren had a heated moment with John Delaney asking, "why talk about what’s not possible.”

That exchange at the debate prompted one on Twitter, where my friend Kevin Gamin wrote "Considering how Warren dropped an anvil on Delaney, we're already down one."  I responded "Yeah, but Delaney is rich, self-funding, and on a mission to tell the liberals off. It will be a while before he drops."  I followed up on my tweet by writing "I was right that it would be a while before John Delaney dropped out. I didn't think it would take six whole months!"  Anyway, good riddance!

I mentioned above that FiveThirtyEight's second drop out draft in November didn't pick Delaney.  However, his name came up in a rebuttal to Sarah Frostenson picking Tom Steyer.


nrakich [Nathaniel Rakich, elections analyst]: I don’t know. In the “self-funders” category, I think former Rep. John Delaney is likelier to drop out than Steyer. At least Steyer’s money is getting him into debates.

Delaney, on the other hand, has loaned his own campaign more than $24 million total for the cycle and has nothing to show for it.

At what point do you say, “Hm, I think I’d rather keep my money”?

geoffrey.skelley: I don’t know. He seems dedicated. Delaney completed the “Full Grassley” — named for Iowa Sen. Chuck Grassley — by visiting every county in Iowa, and obviously, he has a ton of personal wealth to keep him going, so who knows.

Anyway, it's still six down, three to go.  Here's to Bennet dropping out after Monday night.

Follow over the jump for the drink suggestions and memes/graphics I'm retiring now that Delaney has dropped out.

I begin with my suggestion for Delaney from Drinks for the Democratic debates, Part 1. 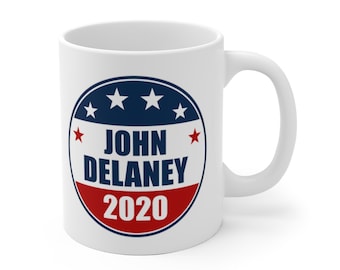 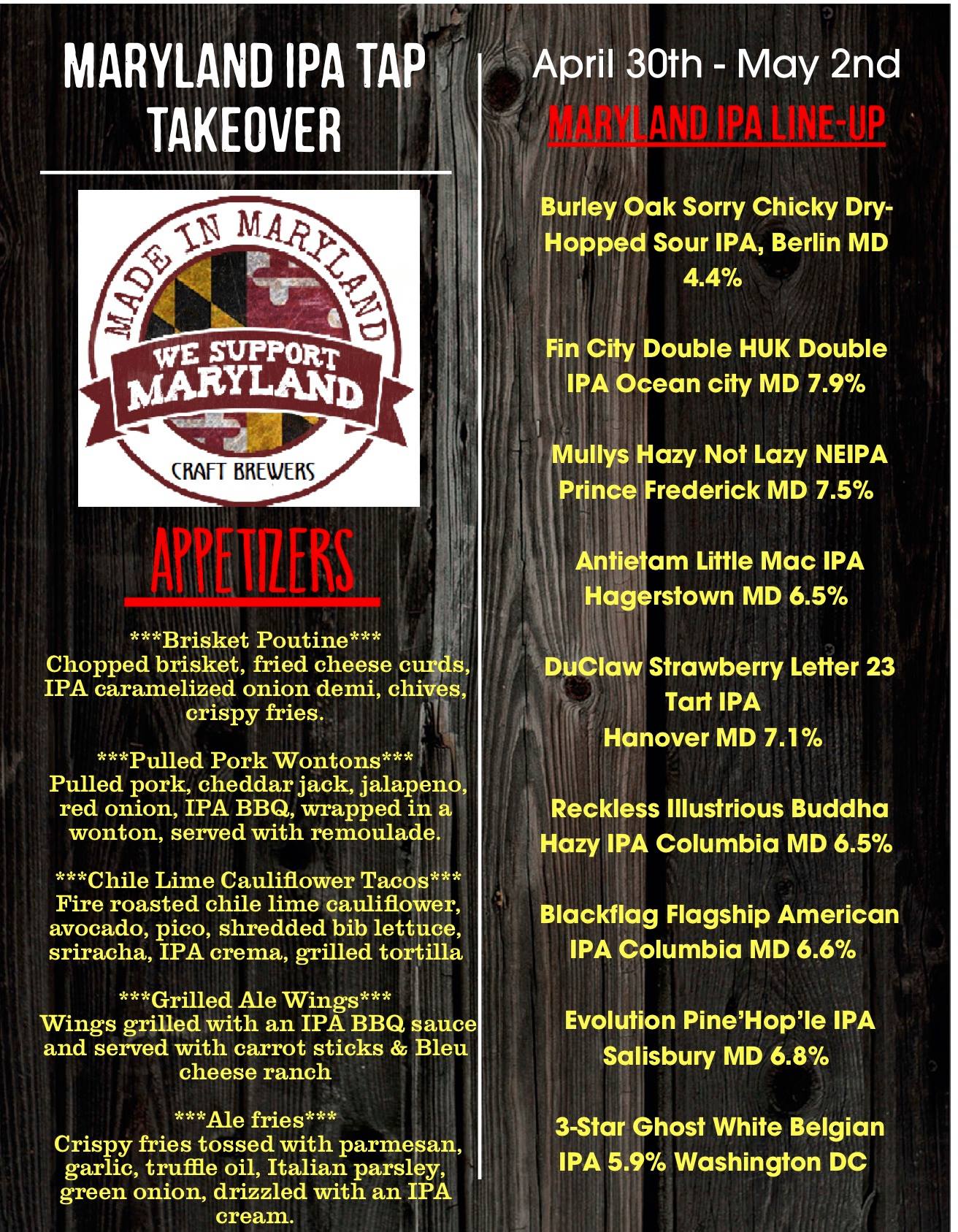 Next, the meme I made for OnTheIssues.org's take on the Democratic presidential candidates from left to center. 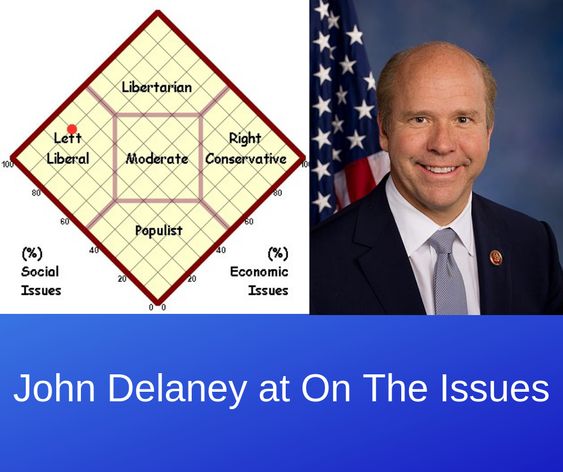 Next, the meme I created for On The Issues shows most of the Democratic candidates have moved left during the campaign, too. 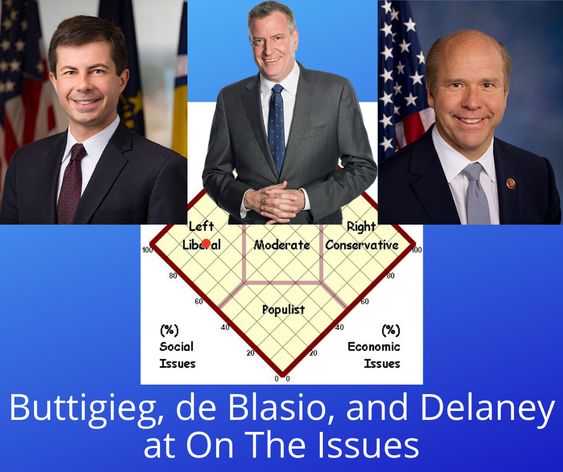 Two other candidates also moved left economically enough that On The Issues no longer considers them to be Libertarian-Leaning Progressives but instead Hard-Core Liberals, John Delaney and Mike Gravel, both of whom now have economic scores of 23.  Delaney moved left economically five points from 28 at the same time moving two points to the center from 85 to 83 for a net move of three to the left overall.  Gravel's economic score dropped by seven from 30 while his social score of 98 remained unchanged.  Because Gravel has the more liberal social score, I consider him to now be more liberal than Delaney.  The former U.S. Senator from Alaska had been the twentyfirst most liberal in June; he is now the eighteenth most liberal.  Meanwhile, Delaney maintained his ranking at nineteeth.

I conclude with my description of Delaney's ideological position from Democratic candidates continue to drift leftwards according to On The Issues. 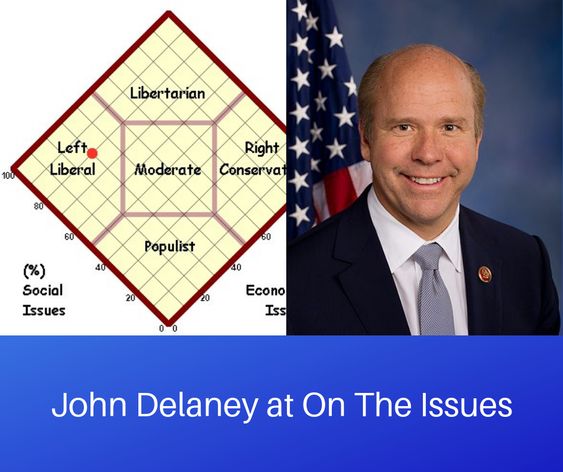 When I credited one candidate moving to their right along with three candidates dropping out for the movement up the ranks of Bennet, Messam, and Steyer, that candidate was John Delaney, who returned to his June economic score of 28 after scoring 23 in July while maintaining his July social score of 83.  However, because of the three candidates to his left who dropped out, his rank rose from nineteeth to eighteenth most liberal candidate still in the field.  Anyone who watched his performance in the second pair of Democratic debates in Detroit shouldn't be surprised.  CNN used him as an attack dog on behalf of the party's moderate wing against the most prominent progressives on the stage, Sanders and Warren.  In the opinion of a lot of liberal viewers, he lost to Warren, but as I observed on Twitter, "Delaney is rich, self-funding, and on a mission to tell the liberals off. It will be a while before he drops."  FiveThirtyEight seems to agree, as they didn't pick him in Our First 2020 Drop-Out Draft.  At least he isn't likely to be on the debate stage again to be used to generate conflict between the left and center.

Delaney ended his candidacy in the same place, with an economic score of 28 and a social score of 83.  At least he was consistent!

That's it for the state of the Democratic campaign for today.  Stay tuned for a post about either Groundhog Day or Super Bowl Sunday.  Who knows, I might be able to write about both in one entry!
Posted by Pinku-Sensei at 5:36 PM