Bye-bye Booker as Cory climbs down from his campaign

I expressed my hopes and fears about who would drop out of the Democratic presidential primary campaign next to open Wave good-bye to Williamson as she drops out.

When Julian Castro dropped out last week, I summarized the status of the remaining candidates picked in FiveThirtyEight's second drop out draft in November.

Four down, five to go.  In order of likelihood of suspending their campaigns, FiveThirtyEight listed the remaining five as Cory Booker, Marianne Williamson, Michael Bennet, Tom Steyer, and Amy Klobuchar.  I'd prefer Bennet get out next, but I'm afraid it will be Booker.

Last week, it "ended up being neither my hope nor my fear" as Williamson suspended her campaign, but that was not the case yesterday.  CBS News reported Cory Booker drops out of presidential race.

Senator Cory Booker is the latest Democratic candidate to suspend his bid for the White House. He was one of only two African American candidates still in the race. CBSN political reporter Caitlin Huey-Burns and CBS News campaign reporter Jack Turman joined CBSN to discuss the breaking news.

Booker's departure was noteworthy enough that Seth Meyers opened his monologue with the news: Senator Cory Booker Drops Out of 2020 Race.

One of the commenters had a really good take on Booker.

This decathlon of democrats is feeling more like a bachelor-style reality TV  show with each week that passes. "Cory, you're an attractive, charming bachelor. And I bet you're going to make a different caucus very happy one day. But America has no rose for you tonight..."

LOL, cold, just like Seth's joke, but I think the punchline for Williamson was colder.

As I noted, Booker was the highest choice from FiveThirtyEight's November drop out draft and the second highest choice overall after Castro.  Here is what the panel had to say about him two months ago.

sarahf: Oof, I guess that means I’m up.

I’m going with the other low hanging fruit out here … Sen. Cory Booker.

Interesting — I had him ranked seventh on my board.

Booker ended up being the sixth candidate dropping out after November behind Sestak, Bullock, Harris, Castro, and Williamson, so Nathaniel Rakich was more right than the rest of the panel.

This is a Gillibrand-esque pick, Sarah. Which probably means you’ll be right.

sarahf: Ha, I don’t know about that. But no matter how you slice it, this primary has not had a lot of breaks for Booker. Despite being a talented politician, he’s continually languished at what — 2 or 3 percent in the polls? Granted, he has made the November debate. But I do think making the December debate — while not impossible — will be a stretch for him with the higher thresholds (4 percent support in four national or early-state polls or 6 percent in two early-state polls). After all, he doesn’t have a single qualifying poll yet.

And similar to Kirsten Gillibrand, he still has a career in the Senate, so if it looks like he won’t make December (hitting that 4 percent threshold is going to be hard), I think he bows out. I mean, when was the last time Booker even hit 4 percent in a poll?

geoffrey.skelley: Booker last hit 4 percent in a debate-qualifying poll from Monmouth University in late August. He hasn’t managed to pull that off in a November or December debate poll yet.

sarahf: So tell us, Nathaniel, why did you have him so low on your draft list?

nrakich: I guess I didn’t realize how long Booker’s odds were to make the December debate.

I do think he’ll last another month, though, since as you said he’s qualified for November already.

And I think there are other candidates who will drop out first.

It’s worth noting, though, that Booker’s net approval rating (approval rating minus disapproval rating) among registered voters in his home state of New Jersey is down to +5, per Monmouth. That’s a decrease from +23 last year!

Mind you, I don’t think he’s in serious danger of losing reelection (he’s up in 2020), but he might not want to keep letting that discontent fester.

So far, the panel's picks have done well by doing poorly, as the top five have dropped out along with the seventh pick, Sestak.  All that remain are Bennet, who I hope drops out next, Tom Steyer, and Amy Klobuchar.  Six down, three to go.

Follow over the jump as I retire Booker's drink suggestions and graphs.

I begin, as my custom, with the drink suggestions for debate drinking games from Drinks for the Democratic debates, Part 1. 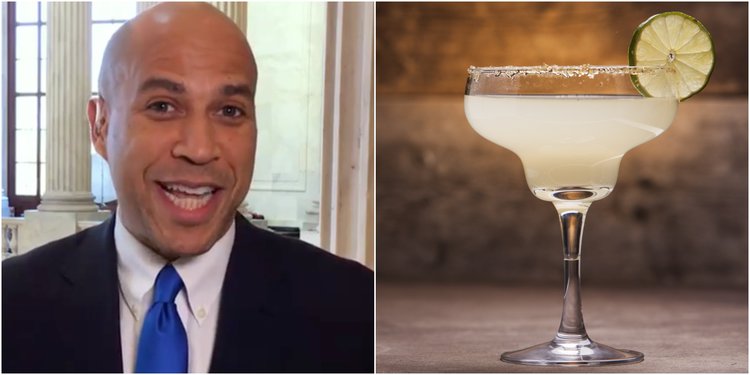 Of course, if one wanted to be true to Booker's no alcohol regimen, one could serve a mocktail, but what's the fun in that?

Since Booker is a sitting Senator, he has a Voteview page, so I made a graph/meme for him in Senators and Representatives running for the Democratic nomination are drifting to the left as they campaign. 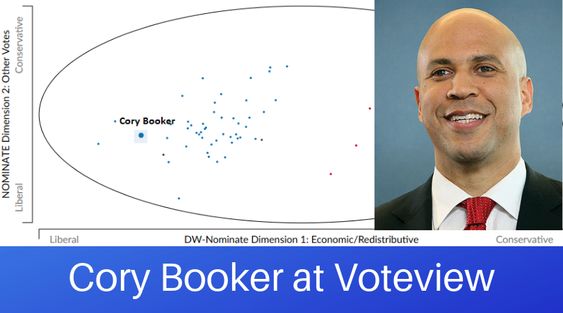 Cory Booker is the one exception among Democratic candidates to the trend of moving to the left over the past month.  True, his score went from -0.618 to -0.619 during late April and May, but it's now  -0.611.  He still ranks as the third most liberal candidate and is more liberal than 95% of Democrats in the 116th Senate, making him the third most liberal Senator as well.

I last updated Booker's Voteview score in An update on Democratic candidates' Voteview scores before Congress returns from August recess.

Cory Booker continued drifting to the center from a Voteview score of -0.611 in July and a score of -0.607 now, but is still the third most liberal member of the current Senate.  This contrasts with his move left according to On The Issues.

Booker returned to his July score of -0.611 when he dropped out.

Next, the meme depicting Booker's position on a Nolan grid from OnTheIssues.org's take on the Democratic presidential candidates from left to center.

By the way, where's Cory Booker, who Voteview ranked as the third most liberal?  Be patient; I'll get to him. 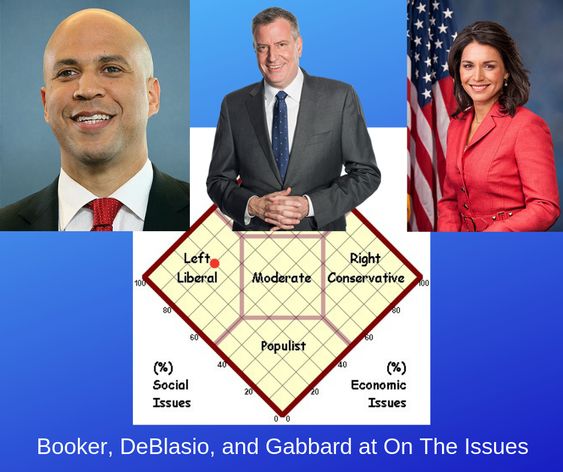 I told my readers above to be patient, as I'd get to Cory Booker, whose stated positions result in his being rated as a lot less liberal economically with a score of 25 than his votes place him on VoteView's scale.  This score ties him on the economic scale with Marianne Williamson.  However, his high social score 80 combined with his more moderate economic score leads On The Issues to consider him a Libertarian-Leaning Progressive.

Booker's rating, like most of the rest of the field, scored him as more liberal in On The Issues shows most of the Democratic candidates have moved left during the campaign, too. 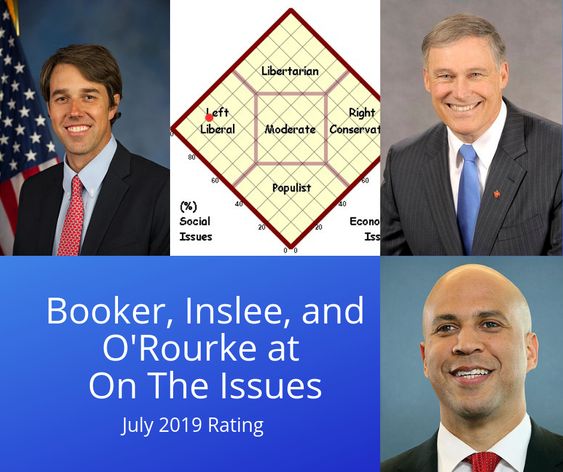 The two New York City area candidates, Cory Booker and Bill de Blasio, have also moved to their left and now have economic scores of 20.  Booker had been the more economically liberal with a score of 25 while de Blasio was the more moderate with a score of 28 in June.  Booker also became five points more socially liberal with his score on that dimension increasing five points from 80 to 85 for a net move of ten points to the left, while de Blasio become slightly more moderate with his social score decreasing from 83 to 80 for a net change of five points to the liberal corner of the Nolan Grid.  Booker had been the seventeenth most liberal in June; he's now sixteenth, while de Blasio ranked as the twentieth most liberal last month but seventeenth now.  As a result, On The Issues no longer considers them to be Libertarian-Leaning Progressives but instead Hard-Core Liberals.

Booker continued his migration to the left in Democratic candidates continue to drift leftwards according to On The Issues. 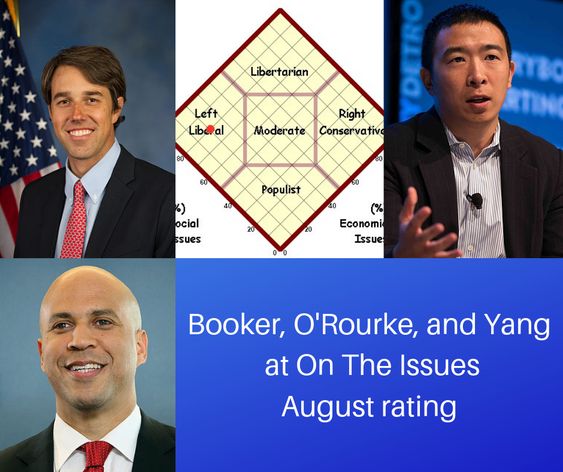 In June's entry analyzing the candidates' scores at On The Issues, I noted the disconnect between Cory Booker's ranking according to On The Issues and his ranking according to Voteview.  July's analysis showed that he moved to the left, decreasing the discrepancy.  Booker has continued moving to the left, at least economically, as he now has an economic score of 18, two to the left of the 20 he had in July and seven to the left of the 25 he had in June.  Meanwhile, his social score dropped five from 85 to 80, making him more moderate along that axis.  Since no other candidate currently has an economic score of 18, it doesn't matter as I don't need to use his social score as a tiebreaker.  Consequently, Booker is now the fourteenth most liberal candidate, up from sixteenth last month.

I had one final comment on Booker's ideological scores at On The Issues at the end of Kamala Harris heading home came as a complete surprise.

While I'm retiring this chart because Harris has dropped out, I would have had to been retired even if she were still running.  First, Harris left the campaign with a more moderate social score of 73, which, combined with her economic score of 10 places her closer to Amy Klobuchar than Joe Biden.  Harris ended her run as the fourth most liberal member of the field according to On The Issues.  Second, Biden himself has become more moderate with an economic score of 15 and a social score of 80.  The two no longer share the same point on the Nolan Grid.  Time to make a new graph for Biden, Cory Booker, Julian Castro, Tom Steyer, and Andrew Yang, who now share a spot.

That prompted me to ask "Now, do I hurry to make new memes for all the remaining candidates for tomorrow's entry, or wait until Booker drops out?  Decisions, decisions" at the end of Julian jumps from the plane as Castro campaign crashes.  By not making the memes before Booker dropped out, I made my decision through inaction.  I guess I have no excuse now.