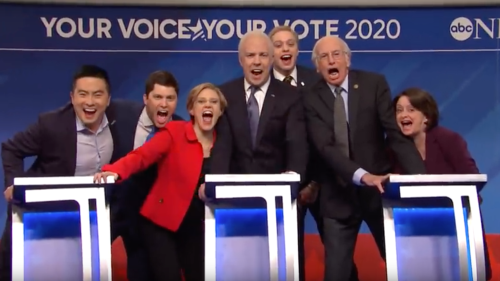 For this week's Sunday entertainment feature, I'm returning to the Iowa Caucuses and the current episode of "The Worst Wing" with help from SNL, just as I did in SNL has fun with the December Democratic debate and impeachment two months ago.

I begin, as the show did, with New Hampshire Democratic Debate Cold Open.

Once again, Michael Bloomberg crashes the debate, this time via his ads.  He'll probably crash the next SNL debate parody, which should be on the 22nd, as he hasn't qualified for the Nevada debate next week and probably won't.  So far, neither has Andrew Yang or Tom Steyer.  That means only five people on stage.  I'll drink to that!

SNL moved on from the debate to other political news to open Weekend Update: Trump Acquitted.

While that pretty much summed up the week in national politics, Weekend Update wasn't done.  SNL returned to the topic to close the segment in Weekend Update: Cathy Anne on Trump's Impeachment Acquittal.

I agree with everything the character said about the trial.

With that, I'm done with last week's episode of "The Worst Wing."  Good riddance!
Posted by Pinku-Sensei at 2:36 PM