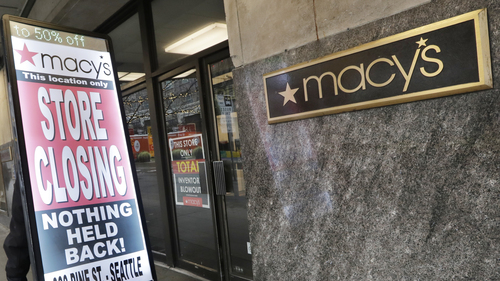 I needed a break from the Iowa Caucuses, the current episode of "The Worst Wing," and other election news, so I'm sharing the latest tale of the Retail Apocalypse, Macy's announcing the closing of more stores.*  I begin with CBS This Morning's Retail giant Macy's announces massive cuts.

The largest department store chain in America is closing 125 stores and cutting 2,000 jobs. Macy’s is making the cuts in an effort to end a yearslong slump, though it’s unclear how many total jobs will be affected once retail workers factor into the final count. Jill Schlesinger breaks down the implications of the retail giant’s massive move.

Macy's announced that it will close 125 of its department stores over the next 3 years. CNBC's Courtney Reagan reports.

Macy's Inc. will close its corporate headquarters in downtown Cincinnati as part of a massive restructuring that includes the elimination of 2,000 corporate jobs and the closure of 125 stores in the next three years.

When I told my wife about this story, she worried that it would take longer for our orders to get here from another location besides Columbus.  I hope the warehouse there stays open.

That's the bad news.  The good news is that no Michigan locations are closing, as the Detroit Free Press reported.

Michigan has 14 Macy's stores with locations in cities including Troy, Dearborn, Ann Arbor, Novi, Sterling Heights and Traverse City, according to its website.

Asked about closures in the Mitten, officials "do not have any store closures to announce at this time," Andrea Schwartz, senior director of media relations for the company, said in an email Tuesday.

*I know I promised to write about the Oscars, but I'm just not feeling it.  Instead, I decided to follow up on a shinier object.  Maybe tomorrow.  Definitely later next week.  Stay tuned.
Posted by Pinku-Sensei at 5:20 PM