Happy, Super Bowl Sunday on Groundhog Day!  To celebrate, I'm going to write about the commercials.  Instead of ads for speculative fiction movies, I'm featuring something I've only seen once before, a political ad during a Super Bowl.*  CNN reports that there are two of them in 2020 Super Bowl ads: Trump vs. Bloomberg and they will show to a national audience.

President Donald Trump and Democratic presidential candidate Michael Bloomberg have each spent millions of dollars on TV ads for the 2020 Super Bowl. Chris Cillizza explains what this unprecedented ad buy means in the 2020 race.

I agree with Cilizza about the importance of these ads.  While the Bloomberg ad does a good job of introducing him, which is an important function of political advertising, that's not its main purpose.  Both Bloomberg's and Trump's ads show that the two campaigns have enough money to spend $10 million just to air during the Super Bowl without blinking.  That's intimidating, although, it will definitely cause the more populist campaigns, such as those of Bernie Sanders and Elizabeth Warren, to react.

Not only does this spot introduce Bloomberg, it showcases one of his signature issues, gun control.  It also might help him with African-Americans, who aren't particularly keen with Bloomberg because of stop and frisk.  That's one of the findings FiveThirtyEight reported in Bloomberg’s Super Tuesday Strategy Might Be Working.

Bloomberg has spent a lot of money on TV ads. In fact, he’s spent more than any other candidate running for president, including billionaire Tom Steyer, who’s also dropped a significant amount of money in some of these states. According to data from Kantar/Campaign Media Analysis Group, Bloomberg has spent an estimated $224 million on TV ad spots since entering the race, much of it concentrated in Super Tuesday states. In Texas, for instance, he has spent an estimated $24 million. And in all the Super Tuesday states combined, Bloomberg has spent about $91 million, which is four times more than what Steyer has spent (about $23 million) and more than 13 times what the rest of the Democratic candidates have spent — about $7 million.
...
That money seems to be paying off in both the polls and the endorsement primary. Bloomberg is hardly the most popular candidate among party elites, but he has picked up some key endorsements in recent weeks: He now has the same number of endorsement points as Buttigieg. On Monday, Rep. Scott Peters from California voiced his support for Bloomberg, making that his fifth congressional endorsement. His endorsers are geographically diverse, too, which potentially indicates his strategy is successful in building a broad base of support.

As for who exactly makes up Bloomberg’s burgeoning base, it is mostly older, wealthier and more moderate Democratic voters. This is perhaps not that surprising, considering Bloomberg has consistently branded himself as an alternative moderate candidate. For instance, per a recent national Echelon Insights poll, Bloomberg was the second-most popular candidate for moderate or conservative likely Democratic primary voters, picking up 20 percent support. Only Biden, at 23 percent, picked up more support among these voters.

But there are also signs that Bloomberg might be able to attract more support among voters of color (who make up almost half of Democratic primary voters) and those without a college degree (about 38 percent of primary voters). In December, a national Monmouth University poll found that 3 percent of nonwhite Democratic voters said they supported Bloomberg. But that figure had grown to 8 percent in its January poll. The pollster also found Bloomberg’s support among voters without a college degree grew from 4 percent in December to 10 percent in January. Fox News and SurveyUSA polls also found signs of Bloomberg diversifying his base: Fox News’s latest poll shows a 5-point uptick in support among nonwhite Democratic primary voters (5 percent to 10 percent) and a 4-point bump (2 percent to 6 percent) among non-college educated white voters since December. SurveyUSA, meanwhile, found a 5-point gain among black voters (2 percent to 7 percent) and a 6-point gain among voters with just a high school diploma since late November.

Money talks and people seem to be listening.

With President Trump in office he is improving the lives of ALL Americans. Under President Trump, the economy is booming, historic tax cuts were passed, trade deals have been ren[e]gotiated, and African-American, Asian American, and Hispanic American unemployment are all at RECORD LOWS!

That caption looks like a slightly cleaned up version of one of Trump's tweets, complete with ALL CAPS and a typo.  While I would be surprised if Bloomberg's spot earns a nomination for Outstanding Commercial at this fall's Emmy Awards, I'm absolutely sure Trump's won't.  Then again, his campaign isn't interested in winning awards; it wants to win votes.

Yesterday, I wrote "Stay tuned for a post about either Groundhog Day or Super Bowl Sunday.  Who knows, I might be able to write about both in one entry!"  Time to be a good environmentalist and recycle. 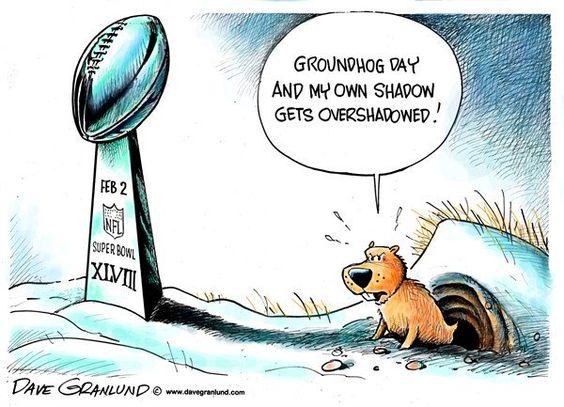 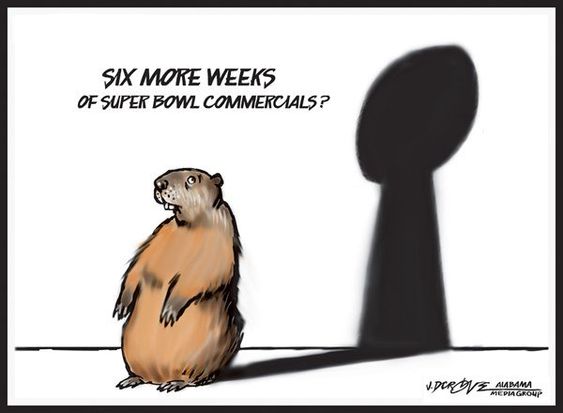 Reuters reported Early spring a 'certainty' says groundhog, but no word on Super Bowl champ: "One question answered, but there was still one to go across America after the world’s most famous groundhog emerged on Sunday, saw no shadow in the snowy morning light, and proclaimed an early spring."  That was the same verdict the local groundhog here in southeast Michigan delivered this morning.  WXYZ reported Woody Predicts An Early Spring.

That's the same prediction she made last year.  She also predicted that the Kansas City Chiefs will win the Super Bowl.  That's what FiveThirtyEight forecasts as well.  I hope they're both wrong, as I'm rooting for the San Francisco 49ers, but I'm afraid they'll both be right.  Sigh.

That's it for the holiday.  Up next, the Iowa Caucuses.  Stay tuned.

*That one ended up backfiring for the candidate who aired it.  Fortunately, it only aired in Michigan.