FiveThirtyEight's Primary Project explains how the U.S. primary system evolved and asks if there is a better way 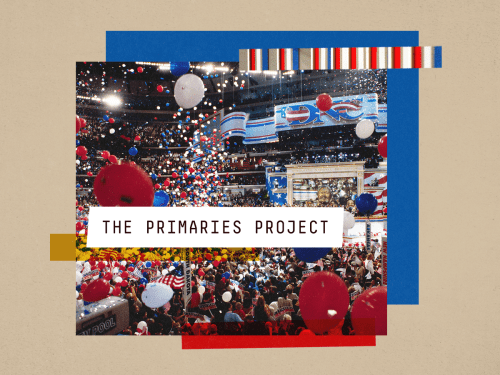 As I am writing this entry, the results from the Iowa Caucuses still have not been released.  That's frustrating.  To cope with my frustration, which includes not being able to write about who dropped out, I've decided to move up the post I planned for next Tuesday, the day of the New Hampshire primary, to today.  Without any further ado, I'm sharing the three videos FiveThirtyEight created for The Primary Project about how our party primary election system developed, how it works, and, most importantly given last night's ongoing failure to report the results, if there is a better way to select a nominee.

First, a history lesson as FiveThirtyEight describes How A Raucous Convention Revolutionized Our Primary System.

By casting a ballot in a primary or caucus, voters in the U.S. have the chance to decide who will vie to lead the free world. But that wasn't always the case. The rules governing our primary system aren't in the Constitution, and average Americans have only been able to have their vote guaranteed to count since the 1970s. This monumental change might not have happened if it weren't for a disastrous convention in 1968.

Over the next few weeks, we'll be looking into how our our modern system of primaries and caucuses came to be as part of our podcast and video series, The Primary Project. This episode is about that 1968 convention, and in the following episodes, we'll ask if the system we have today works as well as we'd like.

For an extended version of the video, listen to Our Presidential Primary System Is An Accident, the podcast upon which the video is based.  Both explain how the Democratic Party reformed its nomination process in the wake of a convention that did not follow the popular will, at least as far as it could be determined, but instead followed the desires of the party bosses, who picked a candidate that did not win a single primary.  The result was rioting in the streets and a defeat at the ballot box.

Next, FiveThirtyEight asks Do Parties Or Voters Choose Presidential Nominees?

Who really picks our presidential nominees? Sure, most Americans have the chance to go to the polls and vote for their favorite candidate in a primary or caucus. But when it comes down to it, are party elites really pulling the strings?

In this episode of The Primaries Project, we look at historical elections to see who's really in control of our primary system: the parties or the people.

The podcast version is How The Modern Primary System Has Shaped Our Politics, which explains that the answer depends on which decade one examines.


To understand how our modern system shapes our presidential candidates, we look at elections from three periods: first, the 1970s, when the reforms were relatively new and the parties and candidates were still figuring them out. Next, the ’80s and ’90s, when the parties got a handle on the rules and used them to promote their preferred candidates. And last, the modern era, when for a variety of reasons, the parties have begun to lose their grip again.

During the 2016 election, the Republican Party lost its control over the process, which is how it ended up with Donald Trump as the nominee, while the Democratic Party had enough power that it got Hillary Clinton.  It's too early to tell how the parties are faring this time around.

Back in the 1970s, we changed how we choose presidential nominees. Those changes supposedly made our primary system more democratic by allowing voters to cast a ballot in a primary or caucus rather than having party leaders pick a candidate. But there is more to a well-functioning democracy than just being able to vote. In this episode of The Primaries Project, we look why our primary system may not reflect the views of the people.

The podcast figuratively shakes its head at the current system as it wonders There Has To Be A Better Way To Pick Presidential Nominees … Right?  After watching last night's (so far) non-result, I'm asking the same question.  I think a lot of my readers are, too.
Posted by Pinku-Sensei at 8:26 AM