Explaining the Media Bias Chart, a popular topic of the past two years of Crazy Eddie's Motie News

Happy Flashback Friday!  Yesterday, I mentioned that I changed the topic of Record unemployment claims and coronavirus accelerating existing retail trends update tales of the Retail Apocalypse for the ninth year of Crazy Eddie's Motie News and explained what I had in mind originally in a footnote.


It would have been an update to Wonkette reacts to its Media Bias Chart placement, an update to 'A comparison of two measures of media bias shows readers and viewers respond to both ideology and quality', but I'm saving that for tomorrow.  Stay tuned.

I'll cover how this entry got its page views over the jump, but first I'm examining how the Media Bias Chart works.  I begin with Newsy's Political media's bias, in a single chart from 2018.

Vanessa Otero set out to rank an ever-growing partisan media landscape, with the belief that an informed public is a better public.

If you've seen the Media Bias Chart and wanted to know how we put it together here's a thorough discussion about it. Ad Fontes Media Founder and CEO Vanessa Otero goes over concepts she covers in her public talks.

Of course, all stories these days are being examined through the lens of the coronavirus pandemic and the Media Bias Chart is no exception.  Watch Polarization of Coronavirus Stories to see how.

If you watched all the videos, congratulations!  You now have a good education in media literacy.

Follow over the jump for how Wonkette reacts to its Media Bias Chart placement, an update to 'A comparison of two measures of media bias shows readers and viewers respond to both ideology and quality' earned its page views. 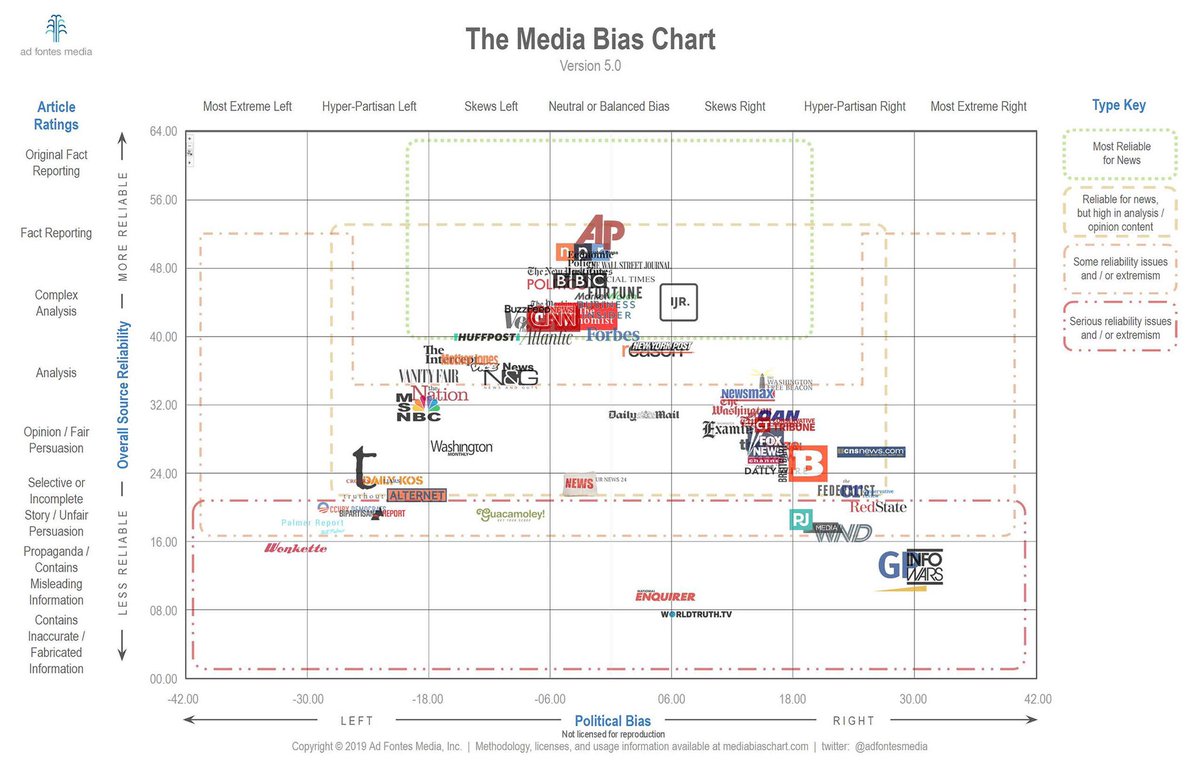 Wonkette reacts to its Media Bias Chart placement, an update to 'A comparison of two measures of media bias shows readers and viewers respond to both ideology and quality' posted April 4, 2020 earned ~1,260 default and 1,700 raw page views by March 20, 2020, enough for it to place fourth according to both measures among entries posted during the ninth year of this blog and fifth overall.  It ended April 2019 with 1234 default and 1316 raw page views, ranking it second for the month according to the first measure and first according to the second.  Readers also left 12 comments during the month and year, the most comments on an entry posted both during April and the blogging year as whole and tied with Entertainment for the sixth year of Crazy Eddie's Motie News for the most comments overall during the blogging year.

In addition to being shared at the Coffee Party USA Facebook page, this entry earned its page views by Infidel753 sharing the link both at his blog and at Crooks and Liars.  Thanks, Infidel!  It also had views from a Disqus comment.  Since Wonkette uses Disqus, I think it's a fair assumption that someone linked to my entry from there, but I couldn't find the comment, so I couldn't prove it.  Darn.

That's it for this week's retrospectives.  Stay tuned for something more about coronavirus tomorrow.  Yes, everything is about the pandemic these days.

Previous posts in this series.
Previous retrospectives about the Media Bias Chart.