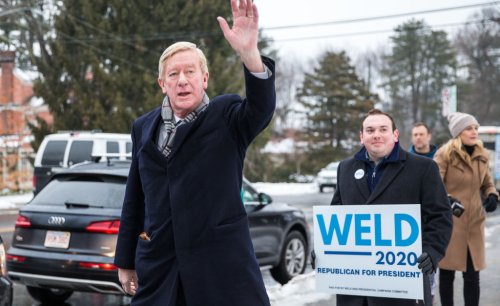 I expressed my pessimism about the last significant primary opponent to Trump in Joe Walsh walks away from the Republican primary and says he'll support the Democratic nominee.

Now it's up to William Weld to serve as the internal opposition to Trump within the Republican Party.  I wish Weld luck, but I don't know if he'll even get enough delegates to earn a speaking spot at the Republican National Convention — this is, if the party bothers to follow their own rules.  I'm not optimistic about that, either.

I was right to be pessimistic — Weld received only one delegate to Trump's 1,330 so far — but as I observed in Bye, Bye, Bernie, the Sequel, I didn't see the confirmation of my opinion when it happened.

I'm not done with this series, as I missed Bill Weld dropping out on March 18, 2020.  My excuse was that I was busy with Vox explains how its viewers and readers can fight the coronavirus.  I'll get around to it on Saturday after I post retrospectives for Throwback Thursday and Flashback Friday.  In the meantime, on to the conventions (no matter how they will be held) and the general election!

Well, at least it wasn't like the last candidate I missed leaving the race, when I wrote I missed Messam dropping out three months ago.  It only took me three weeks.

The announcement comes after  president cleared the number of delegates needed to be the GOP nominee.

Most Americans dislike Trump, but the overwhelming majority of those who remain in the Republican Party appear to be very enthusiatic about supporting him.  Sigh.

Since I never suggested any drinks for him, I don't have to retire any.  Besides, there have been four candidates from Massachusetts, so I've suggested, retired, re-used, and re-retired so many drink suggestions for the Bay State that I don't feel like repeating myself.  Sometimes, even an environmentalist gets tired of recycling.

That's it for this stage of The Hungry for Power Games or Fury Road to the White House, whichever Colbert meme one wants to use, unless I feel like doing something for the Libertarian or Green Party conventions.  Otherwise, I might do it for the general election.  We'll see.

Stay tuned for a drum corps Easter followed by a celebration of Yuri's Night.
Posted by Pinku-Sensei at 11:45 AM