After a serious look at the 2020 Atlantic hurricane season and a comedic take on Trump ignoring science on fires, it's time to continue my pattern of alternating serious and silly examinations of these two climate-fueled weather disasters with a serious report that adds another one of my angles, a view of a national issue from Michigan thanks to WOOD-TV in Grand Rapids.

I begin with the faster breaking of the natural disasters in Hurricane Sally unleashes flooding along the Gulf Coast.


This isn't even the worst of the damage from wind and water. I might show those in a few days once Sally finishes passing over land or when the National Hurricane Center runs out of names and starts using Greek letters.


All of the red and orange dots on the map of the western U.S. and Canada depict in an abstract way the extent of the damage, while the interview with Ashley Wildeman conveys the emotional effect on one person experiencing the fires first-hand.

The last video I'm sharing, Storm Team 8 Forecast: 11 p.m. 091520 provides an example of "everything is connected to everything else" and "there is no away." The jet stream is blowing smoke from the western fires all the way across the continent, causing gray skies and an orange sun here in Michigan, as seen in the preview image.

WEDNESDAY: Temperatures will climb into the mid 70s. A cold front will pass through later in the day, leading to a slight increase in cloud cover and a few spotty showers during the afternoon and evening.

That's exactly what I saw yesterday when I ran errands around 6:00 P.M. on the other side of the state. That's not something I recall seeing here during the 31 years I've lived in Michigan, although I remember seeing that growing up in Southern California. It felt eerie seeing the sun as a glowing pumpkin against a gray sky 2,000 miles away from the fires.

At least Hurricane Sally won't directly affect Michigan, as the storm track below shows it staying down south. It could have headed here, as the remnants of Katrina passed directly over the state 15 years ago. On the other hand, the storm could strengthen again when it moves into the Atlantic off South Carolina. If so, I hope it continues heading out to sea. 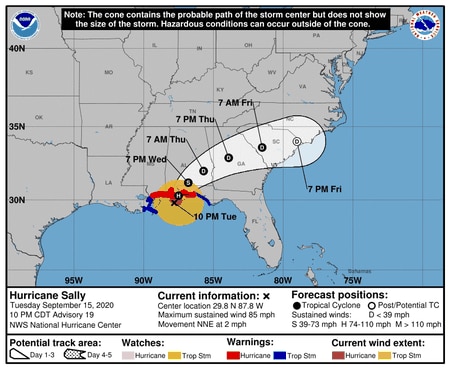