'Schitt's Creek' vs. 'The Marvelous Mrs. Maisel' — Outstanding Comedy Series nominees that use politics and government for laughs 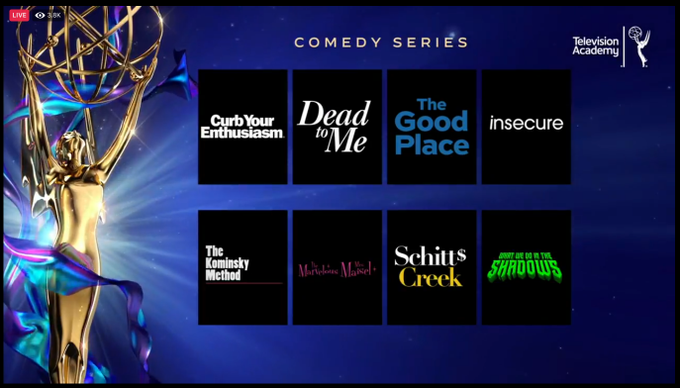 Curb Your Enthusiasm (HBO)
Dead to Me (Netflix)
The Good Place (NBC)
Insecure (HBO)
The Kominsky Method (Netflix)
The Marvelous Mrs. Maisel (Prime Video)
Schitt's Creek (Pop TV)
What We Do in the Shadows (FX)

This is one of the two most prestigious categories for programs, so the Television Academy uploaded a video announcing its nominations. Watch 72nd Emmy Nominations: Outstanding Comedy Series.

The nominees for Outstanding Comedy Series are Curb Your Enthusiasm, Dead To Me, The Good Place, Insecure, The Kaminsky Method, The Marvelous Mrs. Maisel, Schitt's Creek, and What We Do in the Shadows.

I begin by being a good environmentalist and recycling what I wrote about the equivalent category in 'Watchmen' and 'Unbelievable' lead nominees about politics and government at the 2020 Television Critics Association Awards.

The Mayor of "Schitt's Creek" is an important supporting character and the female lead, Catherine O'Hara as Moira Rose, runs for town council and wins the seat...As the Television Critics Association notes, "The Good Place" won last year, but it's contending with Program of the Year nominee "Schitt's Creek" for this award. As I mentioned yesterday, both completed their final seasons, so that makes them even in that regard. As much as I want "The Good Place" to win, I suspect "Schitt's Creek" will unseat it in this category. As for the rest of the nominees, "Insecure" deals with race and other social issues, so it's the most political, while the protagonists of "Dead to Me" are dealing with the police among their many misadventures. "What We Do in the Shadows" is not political, but it is the other speculative fiction nominee besides "The Good Place" with its comedy vampires.

As I predicted, "Schitt's Creek" won the equivalent category at the Televsion Critics Assocation (TCA) Awards. It also won both Comedy Series and Comedy Episode at the Gold Derby Awards. So far "Schitt's Creek" has also won one Emmy Award for Outstanding Casting for a Comedy Series, which bodes well for the acting categories. Based on those wins, I'm convinced that "Schitt's Creek" is the prohibitive favorite.

The most political of the rest of the field other than "Insecure" is "The Marvelous Mrs. Maisel," which has ventured more into government and politically charged social issues in its third season, even though it's still primarily about show business. It was not nominated at the TCA Awards and won no awards at the Gold Derby Awards, losing to "Schitt's Creek" in six of seven categories, losing in the seventh to "The Good Place." However, it does have two Creative Arts Emmy Awards, so the series won't walk away empty-handed. On the other hand, none of the rest of the comedy series nominees have won any Emmy Awards yet, having run into "The Mandalorian," which competed in many of the same categories and won five Creative Arts Emmy Awards so far. 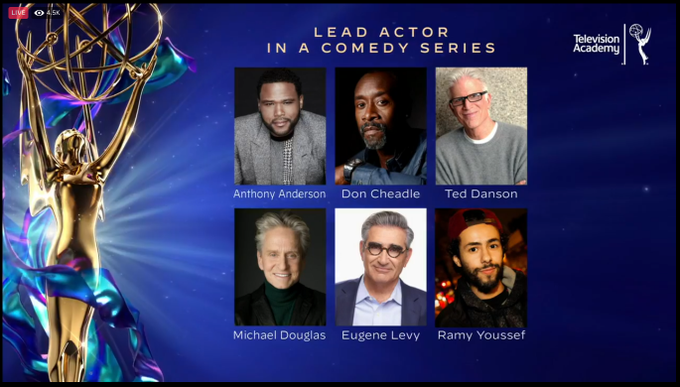 Anthony Anderson as Andre "Dre" Johnson, Sr. on Black-ish (Episode: "Love, Boat") (ABC) Don Cheadle as Maurice "Mo" Monroe on Black Monday (Episode: "Who Are You Supposed to Be?") (Showtime) Ted Danson as Michael on The Good Place (Episode: "Whenever You're Ready") (NBC) Michael Douglas as Sandy Kominsky on The Kominsky Method (Episode: "Chapter 12: A Libido Sits in the Fridge") (Netflix) Eugene Levy as Johnny Rose on Schitt's Creek (Episode: "The Pitch") (Pop TV) Ramy Youssef as Ramy Hassan on Ramy (Episode: "You Are Naked in Front of Your Sheikh") (Hulu)

I think the favorite is Eugene Levy who won the equivalent category at the Gold Derby Awards and has two Emmy Awards already for writing. His main competition is Ramy Youssef, who won a Golden Globe and earned a TCA Award nomination for this role in a show, that like "Insecure," deals with political and social issues. As much as I want to root for Ted Danson from "The Good Place," I think two-time Oscar winner Michael Douglas and Golden Globe winner and Oscar nominee Don Cheadle are better bets. Finally, I expect Anthony Anderson will once again be the best man and not the groom as he loses again. 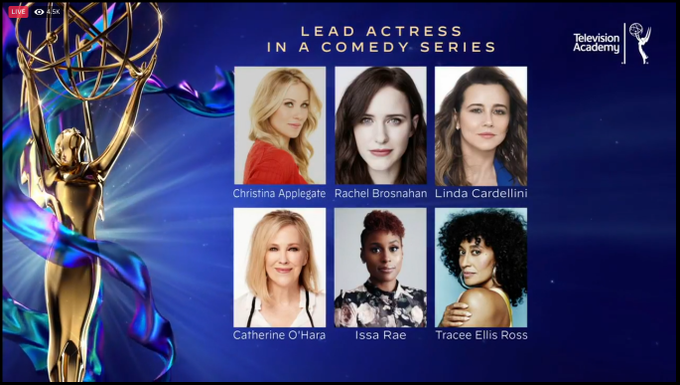 Once again, I kick off my observations by recycling from 'Watchmen' and 'Unbelievable' lead nominees about politics and government at the 2020 Television Critics Association Awards.

I would add Rachel Brosnahan as Miriam "Midge" Maisel in "The Marvelous Mrs. Maisel" as the only Emmy winner for the same role as O'Hara's competition ahead of Applegate, Rae, Tracee Ellis Ross, and Linda Cardellini, although Ross does have a Golden Globe to her credit.

Follow over the jump for the acting categories I covered in It's Saturday night, so here are the 15 Emmy nominations for 'Saturday Night Live' and the nominated talent behind the camera.

Last year, "The Marvelous Mrs. Maisel" swept the supporting and guest acting categories for comedies, so Tony Shalhoub is the nominal favorite. Two things work against it repeating, both here and in the next category. First, the series has two nominees that could split the vote, returning winner Shalhoub and former drama winner Sterling K. Brown. Only if the voters think one is clearly better and settle on him will it help one of them win. Second, this was the final season of "Schitt's Creek," which will only help Dan Levy. Other strong contenders are two-time Oscar winner Mahershala Ali and Oscar winner Alan Arkin. One of them will win, leaving both Kenan Thompson and my personal favorite, William Jackson Harper of "The Good Place," which also had its final season, out in the cold. Phooey and sorry.

Dan Levy won the equivalent category at the Gold Derby Awards, so I think he might just beat Tony Shalhoub.

Alex Borstein won last year and the year before, so she's the favorite. She competed against Marin Hinkle last year as well, so I'm not worried about vote splitting. She also doesn't have to contend with Oscar winner Olivia Colman. My guess for strongest competition for Borstein is Annie Murphy as Alexis Rose in "Schitt's Creek" for the same reason I think Dan Levy is a strong contender for supporting actor in a comedy series; the series has ended. As for the rest of the field, it's also strong. I'm happy D'Arcy Carden earned a nomination for playing Janet on "The Good Place," but that's as far as it goes. I'm also happy Cecily Strong earned a slot alongside repeat nominee and past winner Kate McKinnon. She played both Tulsi Gabbard and Jeanine Pirro in the same episode, clips from which I included in SNL has fun with the December Democratic debate and impeachment. Both performances were hilarious.

I think the contest between Alex Borstein and Annie Murphy is closer in this category than between Levy and Shalhoub in the previous one, but it will be one of these two. If I had to choose, it would be Murphy based on her victory at the Gold Derby Awards. Yes, "Schitt's Creek" swept the top categories there.

Now for the acting nominations recognized at the Creative Arts Emmy Awards. 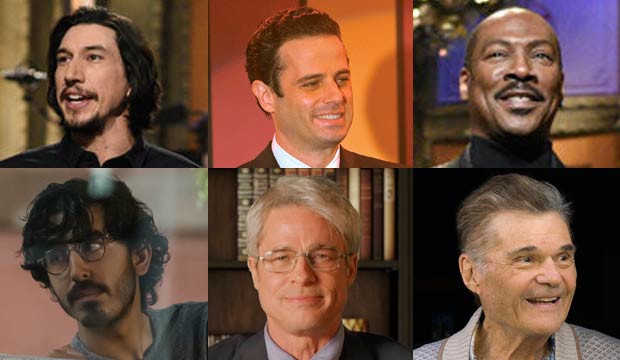 Eddie Murphy won at the Gold Derby Awards, but I'm not sure that will transfer over to the Emmy Awards. I still think Luke Kirby has a good chance. 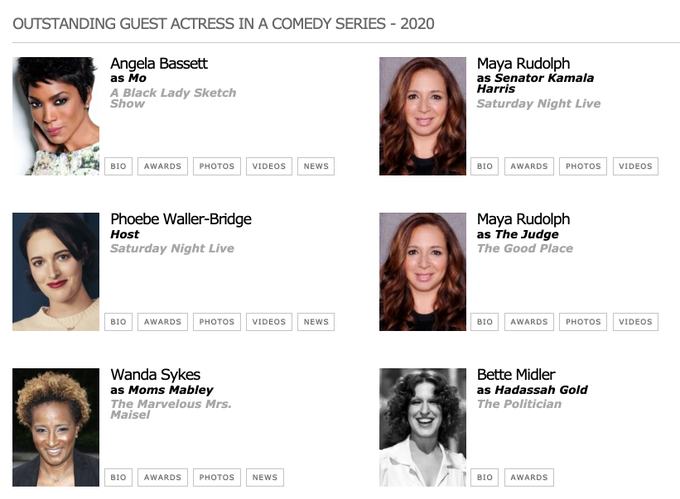 As for the rest of the competition, it's pretty stiff. Phoebe Waller-Bridge won last year as an actress, producer, and writer for "Fleabag," so she's a contender, although her roles on SNL were not as memorable as Rudolph's Harris. This is the second Emmy nomination this season for Oscar nominee Angela Bassett, the other being for Outstanding Narrator. Finally, Bette Midler is a two-time Oscar nominee and multiple Grammy winner. I can't count any of them out.

Rudolph has already won an Emmy for Outstanding Character Voice-Over Performance in "Big Mouth" and she won the equivalent award at the Gold Derby Awards as The Judge in "The Good Place." It's probably the fantasy series best chance for an Emmy.

Now for the nominated talent behind the camera.

If any show will beat "Schitt's Creek," it will probably be "The Marvelous Mrs. Maisel," which won this award two years ago. I would pick "The Great" about a fictionalized Empress Catherine of Russia as the spoiler.

I'd love to see "The Good Place" win, followed by "What We Do in the Shadows," but I think this category will go to "Schitt's Creek" for "Happy Ending." Speaking of happy endings, this is a good place to stop. Stay tuned for the Drama Series nominees tomorrow.

Previous posts about the 2020 Primetime and Creative Arts Emmy Awards
Posted by Pinku-Sensei at 6:12 PM