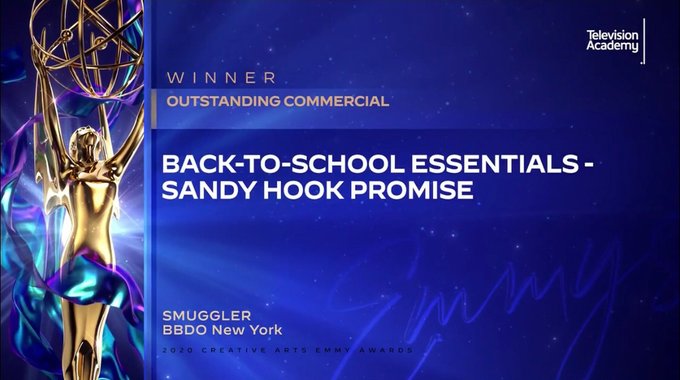 I was pleasantly surprised by the winners of Outstanding Commercial at the Creative Arts Emmy Awards and the News and Documentary Emmy Awards, just as I was two years ago when I wrote 'The Talk' and 'Shark Week 2017' — two Emmy winning commercials. Then, I expected an entertaining Super Bowl commercial and a serious news or documentary promotion to win. Instead, a serious public service announcement (PSA) and an entertaining promotional announcement took home the trophies instead. The same thing happened last week, when Back-To-School Essentials | Sandy Hook Promise won instead of the two Super Bowl commercials I thought were favored, Groundhog Day for Jeep and What did we do before Alexa? I am happy to say I was wrong and that one of the two socially conscious PSAs took the Emmy home instead.

Just to refresh everyone's memory, here's the YouTube upload of the PSA.

Survive the school year with these must-have back to school essentials.
...
**Please note that this PSA contains graphic content related to school shootings that may be upsetting to some viewers. If you feel that this subject matter may be too difficult for you, you may choose not to watch this video.**

Powerful stuff that impressed the Television Academy. I just hope it changes minds outside of Hollywood, especially in Congress.

Now for the fun winning commercial over at the News and Documentary Awards, So Good You’ll Scream: Shark Week Starts Sunday, July 28!


Here is the field of nominees it beat for the award.

Once again, a well-produced, creative, and fun nominee beat out a field of more earnest fare. Considering how grim the News and Documentary Emmy Awards nominees and winners can be, I can't blame them for wanting to recognize something entertaining and effective.

Speaking of entertaining, I'll be back with more Emmy winners in between coverage of the COVID-19 pandemic 2020 election, and climate and weather. Stay tuned.

Previous posts about the 2020 Primetime and Creative Arts Emmy Awards
Posted by Pinku-Sensei at 12:11 PM