After writing about Sandy Hook Promise and Discovery Channel's Shark Week winning Emmy Awards for commercials, it's time to move on to winners for more substantial efforts, documentary features. To that end, it's time to look at the winners out of the films and categories I covered last month in 'The Cave' vs. 'American Factory' — Oscar nominees and other documentaries at the Emmy Awards.

While I featured "The Cave" and "American Factory" in the title of the nominees post because the first was nominated for an Oscar and the second won one, it was one of the other documentaries, "Apollo 11," that won the most Emmy Awards of the nominated documentaries, three, while "The Cave" earned two and "American Factory" took home only one. That written, I begin with "The Cave" because it won the most prestigious category for a documentary at the Creative Arts Emmy Awards, Exceptional Merit in Documentary Filmmaking. 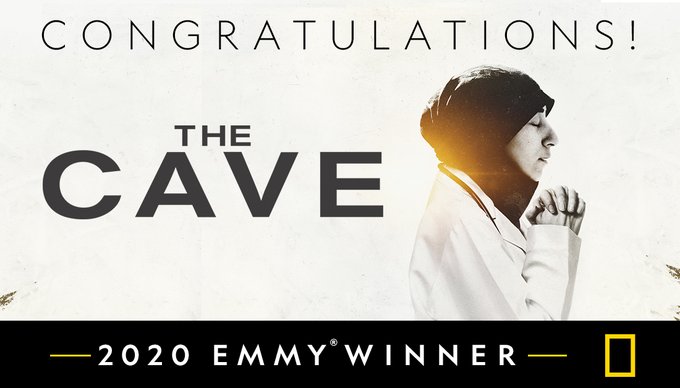 If I handicapped this category purely on the number of nominations, I'd pick "The Cave" with its four nominations while all the others only have one. In addition, it's the only Oscar nominee in the category. However, electorates matter and the Emmy electorate is not the Oscar electorate. "Icarus" won the Academy Award but did not win any of its categories at the Emmys two years ago and Oscar winner "American Factory" did not even earn a nomination in this category. As for the film that could upset "The Cave," I'd pick "One Child Nation," which was the most nominated documentary at the Critics' Choice Awards, even though it didn't win a single category. After all, I did write "I think it will have better luck at the Emmy Awards next year." This is its one chance to prove me right.

Now the announcement of the winner for Merit in Documentary Filmmaking from the Television Academy.

The team from The Cave wins the Emmy for Outstanding Merit in Documentary Filmmaking.

Handicapping on the numbers worked, as "The Cave" won. It also won the next award. 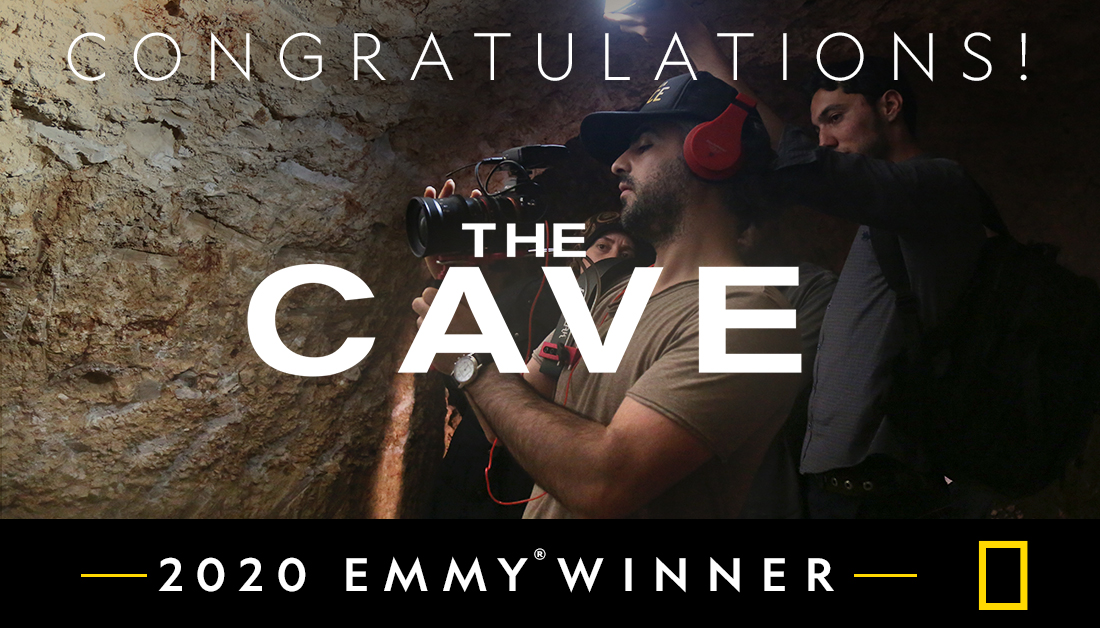 This is one of two categories that have three of the top documentaries, four if one counts "Becoming," competing against each other, so the competition is stiff. On the basis of number of nominations, I'd pick "Apollo 11," but it's up against "The Cave" and "American Factory," which are shot by professionals, while Buzz Aldrin and Michael Collins, while legendary astronauts and American heroes, are essentially amateur cameramen. The Emmy electorate might prefer the professionals, which give nature documentaries "Sea of Shadows" and "Serengeti" a chance.

And now, the video of the announcement, 2020 Creative Arts Emmys: Cinematography for a Non-Fiction Program.

The team from The Cave wins the Emmy for Outstanding Cinematography for a Non-Fiction Program.

I was right that it went to professionals instead of amateurs. Congratulations to the crew of "The Cave" for winning two Emmy Awards. You deserve it, especially after beating Oscar winner "American Factory."

"American Factory" did not leave empty-handed, as it won the next award. 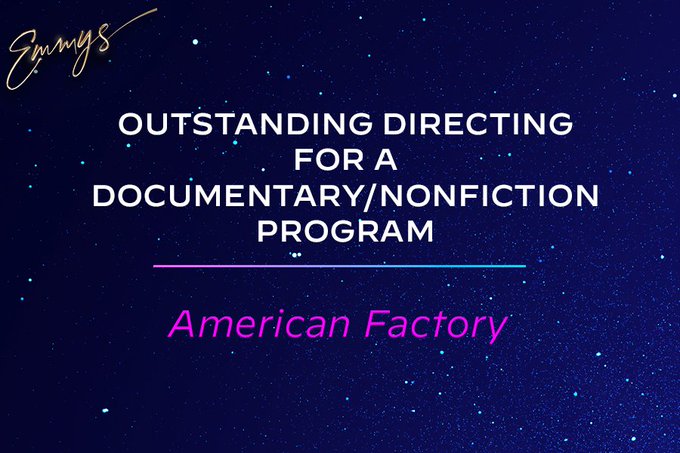 Mark Ruffalo presents Steven Bognar, Julia Reichert and Jeff Reichert with the Oscar for Best Documentary Feature for "American Factory" at the 92nd Oscars in 2020.

Better late than never, as I never did recap the Oscar winners, just the nominees. Tsk, tsk, shame on me. Here's to a belated congratulations to "American Factory" for both the Oscar and the Emmy.

Follow over the jump for the three Emmy Awards won by "Apollo 11." 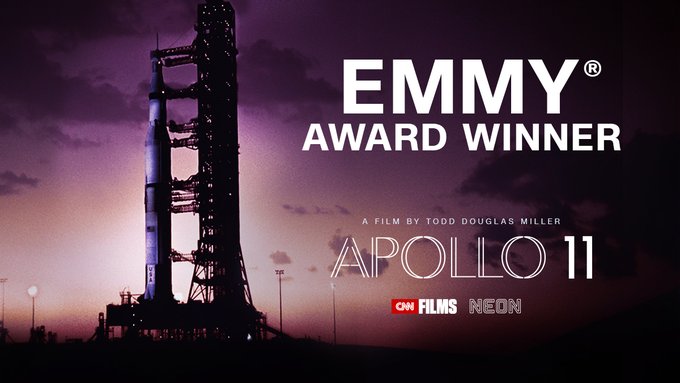 My favorite documentary of 2019 was "Apollo 11," which won two Golden Coffee Cups this past May. As I wrote above, it won three Emmy Awards, beginning with the next category.

I was right to think that "Apollo 11' was one of the favorites, as it won, beating out the one movie I though could beat it, "American Factory."* Unfortunately, the Television Academy didn't upload a clip of it winning. They did tweet out this nice image, however. 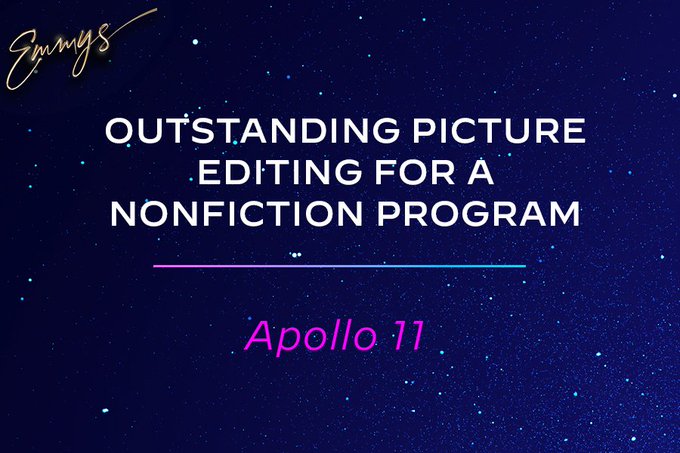 Next, two categories I originally considered in 'Tiger King' vs. 'McMillion$' — big cats and true crime at the Emmy Awards for World Lion Day.

These are also the other two categories with nominations for "Laurel Canyon: A Place in Time," so according to my criterion, it would be the other favorite.

Much to my pleasant surprise, "Apollo 11" beat the music documentaries, true crime series, and reality shows to win both categories. Here are the videos of the acceptances of these awards. First, 2020 Creative Arts Emmys: Sound Editing for a Non-Fiction or Reality Program.

The team from Apollo 11 wins the Emmy for Outstanding Sound Editing for a Non-Fiction or Reality Program (Single or Multi-Camera).

I agree, get money out of politics.

Next, watch 2020 Creative Arts Emmys: Sound Mixing for a Non-Fiction or Reality Program.

The team from Apollo 11 wins the Emmy for Outstanding Sound Mixing for a Non-Fiction or Reality Program (Single or Multi-Camera).

The nominees clips may be different, but the acceptance speech was the same. Not only is Eric Milano a vegan, he likes to recycle, too!

Congratulations to all the all the documentary feature winners, "American Factory" for its one Emmy, "The Cave" for winning two, and "Apollo 11" for being the big documentary winner at the Creative Arts Emmy Awards with three!

*While I was right about "The Last Dance" not winning this category, I was dead wrong about its overall chances at winning any award. That's a story for another entry. Stay tuned.
Previous posts about the 2020 Primetime and Creative Arts Emmy Awards
Posted by Pinku-Sensei at 8:16 PM