The first Presidential debate was last night and the reviews are in. It was "a hot mess inside a dumpster fire inside a train wreck," as CNN's Jake Tapper called it. That's bad for democracy, but good for comedy. On that note, I'm going to do what I did for the Republican National Convention, outsource my reaction to the professional comedians, beginning with Stephen Colbert's LIVE Monologue After The First Trump-Biden Presidential Debate.

It wouldn't be debate night without a LIVE episode of A Late Show! Watch as Stephen Colbert breaks down all the good, bad and ugly moments from the first of three contests between President Trump and Joe Biden.

I have one thing to say about a debate when the monologue about it opens with "are you ready to watch democracy crumble?" and concludes with "this is not going to end well." Yikes!

Senator Cory Booker of New Jersey joins Stephen Colbert after the first Trump-Biden debate with his reaction to the President's dangerous courting of white supremacist groups from the debate stage.

I agree with everything Senator Booker said, including Trump holding the virtues we need now in contempt. That remark reminds me of what I wrote last week.

Describing what Republican Senators are doing [as] hypocrisy actually gives them some moral credit, as "hypocrisy is the tribute vice gives to virtue." At least hypocrites know what virtue is. I don't think that applies to Trump. I suspect he thinks a lot of vices are virtues, so he's not even a hypocrite.

Booker seems to think so, too.

I'm passing on embedding the next segment, which is about Trump appointing Ruth Bader Ginsburg's replacement to move on to the next comedian, Trevor Noah. Follow over the jump for what Noah, Jimmy Kimmel, and the panelists at FiveThirtyEight's live blog had to say about last night's debate.

Trevor reacts to the first "presidential debate."
"They don't need a moderator for this thing, they need a UFC ref." I agree. After the debate, I tweeted "Anyone who was surprised that we got a pro wrestling match tonight instead of a boxing match either forgot or didn't know that Trump is a member of the WWE Hall of Fame. Expect two more cage matches at the #debates."

Jimmy Kimmel on Worst Debate Ever thought it was a wrestling match as well.

Tonight was the first presidential debate between Donald Trump and Joe Biden. Jimmy talks about their very differing views and how terrible the debate was, Trump stirring up nonsense before the debate by releasing Rudy Giuliani to attack Biden's mental faculties and claiming that Biden is abusing Adderall, and Jimmy talks to an undecided voter, lists some of the embarrassing things we learned from Trump’s tax returns, and he presents a new debate edition of #LieWitnessNews.

Hey, Kimmel called what Trump was spouting "Qanonsense." That's a good word for the conspiracy theories he likes. Of course, I would like it; I tweeted just that word out a few weeks ago and it's my fourth most popular tweet this month!

Just like Colbert had on a Senator who was a presidential candidate, Kimmel had on one himself, Bernie Sanders Reacts to Trump Biden Debate.

Senator Sanders talks about the debate between Donald Trump and Joe Biden, Trump’s refusal to accept real science, Biden’s thoughts on the Green New Deal and plans to combat the climate crisis, Trump refusing to condemn white supremacists, whether televised debates are constructive, Trump trying to do away with coverage for pre-existing conditions, the hypocrisy of Lindsey Graham in respect to Trump’s Supreme Court nomination, Americans losing faith in the electoral process, Trump cheating the tax system, and what he says to people who are thinking about not voting.

The one thing that I liked about the debate was that Chris Wallace asked a question about climate change and I'm even more glad that Bernie Sanders talked about it in this interview. On the other hand, I was appalled but neither surprised nor disappointed that Trump's response was to repeat his claims about not raking forests being the cause of the fires, not climate change. Sigh, Trump. 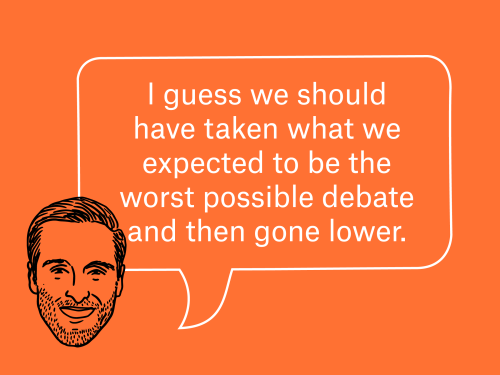 I conclude with the headlines from the end of FiveThirtyEight's live blog of the debate.You got that right, Meena. At least the next debate will be between Kamala Harris and Mike Pence. That promises to be better behaved.

So ends September's blogging. Stay tuned for the first post of October. Three months to go until 2020 is over!
Posted by Pinku-Sensei at 12:52 PM