I asked my readers for advice at the end of 'El Camino: A Breaking Bad Movie' vs. 'Bad Education' and 'American Son' — Outstanding Television Movie nominees about crime and punishment at the Emmy Awards.


I plan on continuing the series tomorrow for the Sunday entertainment feature, although I'm torn between children's programming and animation on the one hand and music and dance nominees on the other. It's been a long time since I've asked for my readers to help me decide, but I'm feeling like asking now. Comments, anyone?

Last I checked, no one responded. It's just as well, because I decided overnight to combine the two ideas and convert the result into an examination of my two favorite science fiction franchises, Star Trek and Star Wars, both of which have two shows with nominations at the Emmy Awards and both of which explore politics and government in a futuristic setting.

I begin with sole nomination for "Star Wars Resistance," which I voted for at the Saturn Awards and which won Best Animated Series on Television. 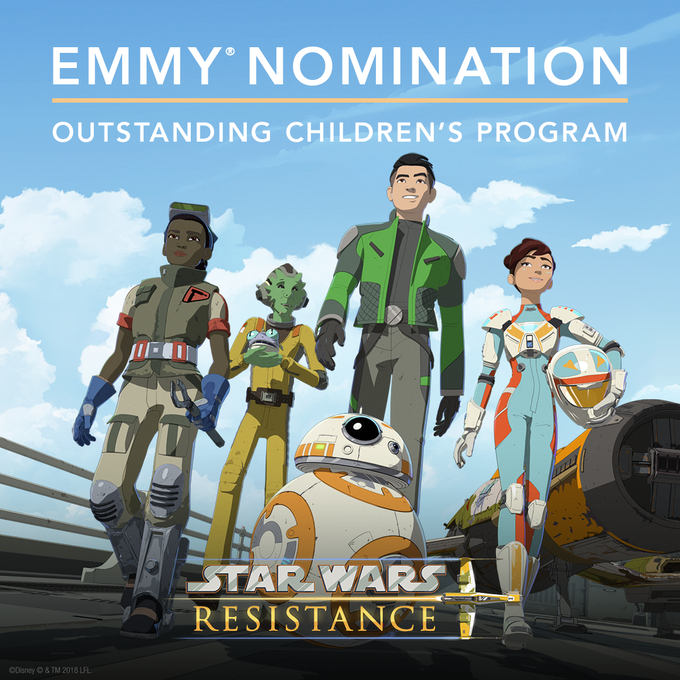 All three nominees examine politics as both of the speculative fiction series have resistance in their titles and "We Are the Dream: The Kids of the Oakland MLK Oratorical Fest" has a social theme with a political dimension. With "Sesame Street" not being renominated in this category, the field is wide open. It should be no surprise that I am rooting for "Star Wars Resistance." It helps that it's the only returning nominee in this category. "Jim Henson's The Dark Crystal: Age of Resistance" had more and better buzz, so I expect it will win. 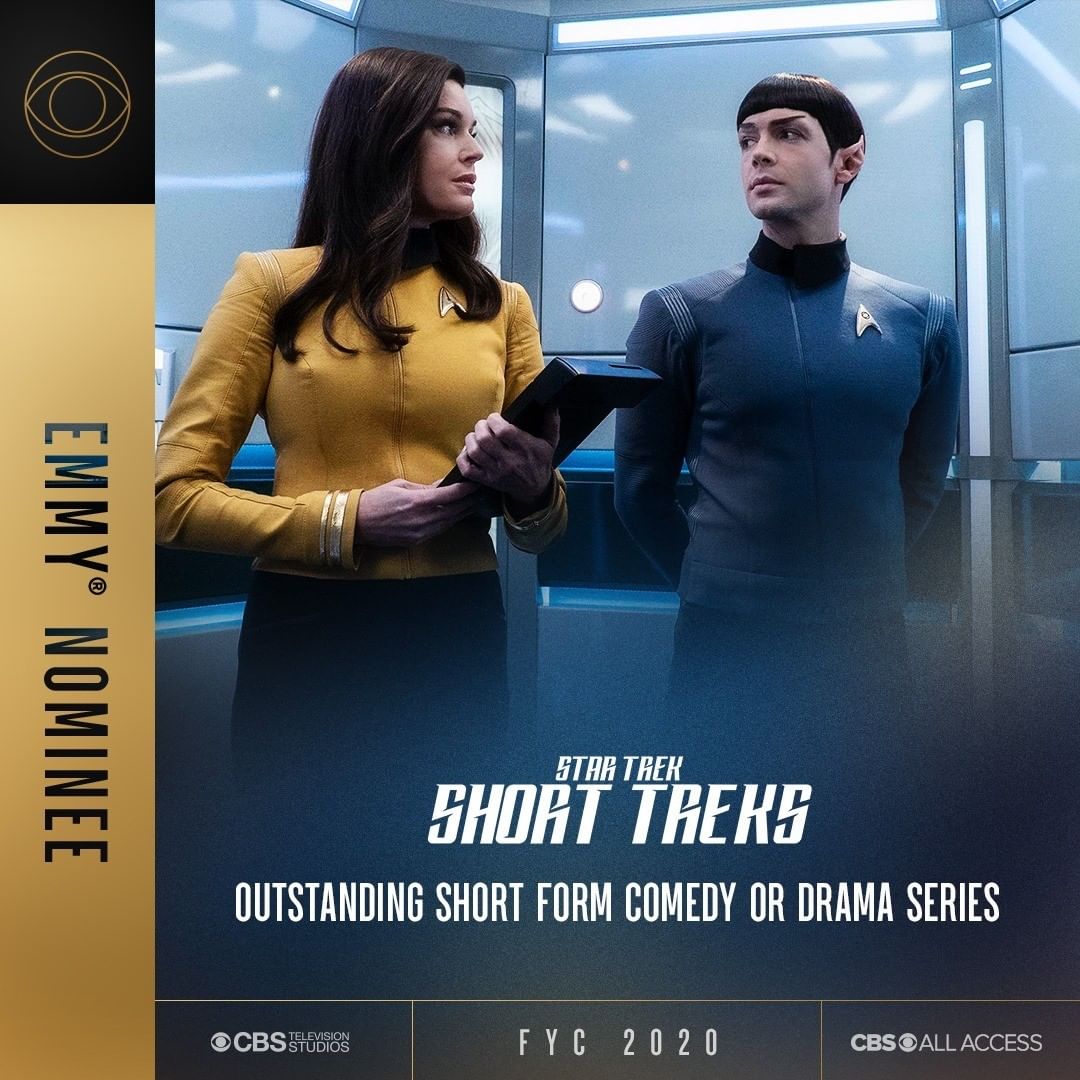 Based on just the nominees for this category, I would have included "funny and futuristic government" in the title of this entry. The funny nominees about government are "Reno 911!," a Comedy Central series that has been revived on Quibi and "Better Call Saul Employee Training: Legal Ethics with Kim Wexler." The futuristic one is "Star Trek: Short Treks." As a Star Trek fan, I'm rooting for "Short Treks." However, I doubt either it or "Reno 911!" will win, even though "Reno 911!" has two nominations in this category and Outstanding Actress in a Short Form Comedy or Drama Series. Instead, I think the other nominee for this category with a second nomination, "Most Dangerous Game," has the inside track to win the Emmy.

Now for the acting nominations for "The Mandalorian" at the Creative Arts Emmy Awards. 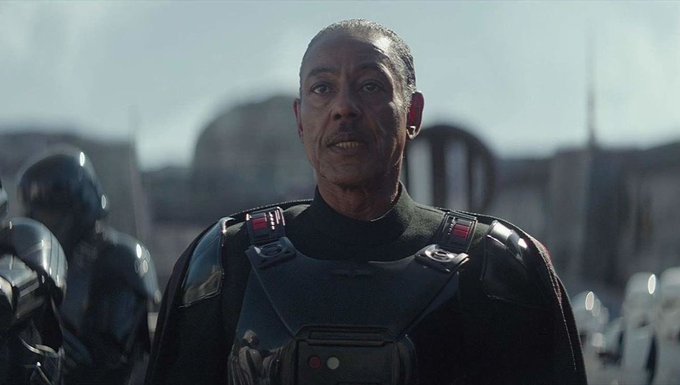 Jason Bateman as Terry Maitland on The Outsider (Episode: "Fish in a Barrel") (HBO)
James Cromwell as Ewan Roy on Succession (Episode: "Dundee") (HBO)
Giancarlo Esposito as Moff Gideon on The Mandalorian (Episode: "Chapter 8: Redemption") (Disney+)
Ron Cephas Jones as William Hill on This Is Us (Episode: "After the Fire") (NBC)
Andrew Scott as Chris Gillhaney on Black Mirror (Episode: "Smithereens") (Netflix)
Martin Short as Dick Lundy on The Morning Show (Episode: "Chaos Is the New Cocaine") (Apple TV+)

I've been impressed with Giancarlo Esposito ever since I watched him play the antagonist in Revolution eight years ago. He was even more scary now and promises to be a great villain for season 2. That written, I was even more impressed by Jason Bateman as Terry Maitland in "The Outsider," so I think he will win instead. 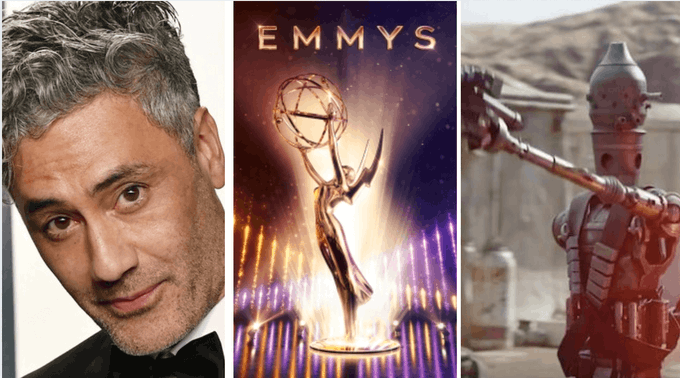 Taika Waititi's droid voice expressed a lot for a robot supposedly devoid of emotion. Even so, he's up against a lot of veteran voice actors and bigger name actors and comedians, so he's facing an uphill battle. Out of that field, I am rooting for Maya Rudolph in her third nomination, but I expect it will be Hank Azaria or Nancy Cartwright, who have been voicing their characters on "The Simpsons" for 30 years.

Follow over the jump for the technical awards nominations for both "The Mandalorian" and "Star Trek: Picard." 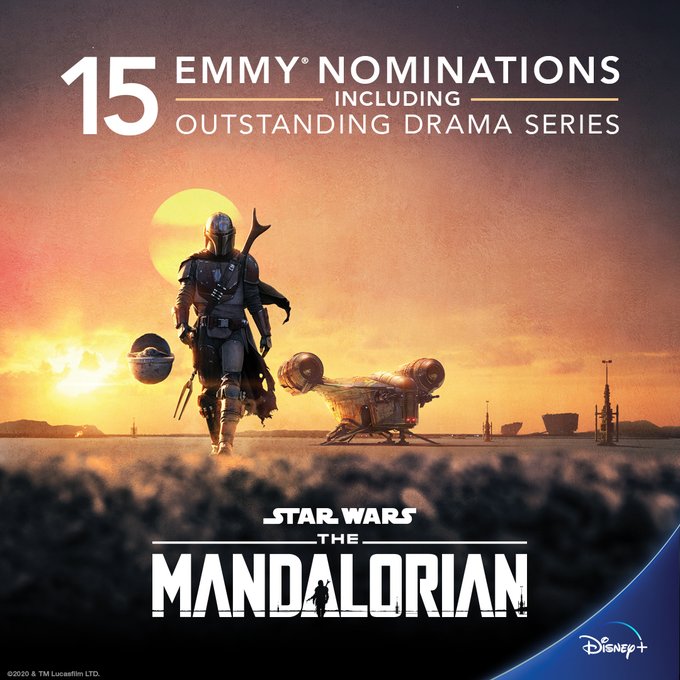 "The Mandalorian" is beautifully shot for a show where all the outdoor scenes are on a green screen. That doesn't make it any less impressive. I hope it's enough to win. As for its competition, "Homecoming" is also about government and it's science-fiction adjacent, if not science fiction set 20 minutes into the future.

I think "The Mandalorian" should be happy just to be nominated, even though it's competing in a open field with "Game of Thrones" over. It's competing against three-time nominee "The Handmaid's Tale" and former nominee "Westworld." The track record favors "The Handmaid's Tale" but I thought the costumes in "Westworld" this season were spectacular. The costumes in "Carnival Row" were no slouch, either, as they were both fantastical and historical, taking place in an alternative timeline during the late Victorian and Edwardian eras, making them the kind of clothes Emmy voters might drool over. That written, I think all of them will lose to "Watchmen." I wouldn't be the least bit upset if that happens.

Now for the first of five nominations for "Star Trek: Picard." 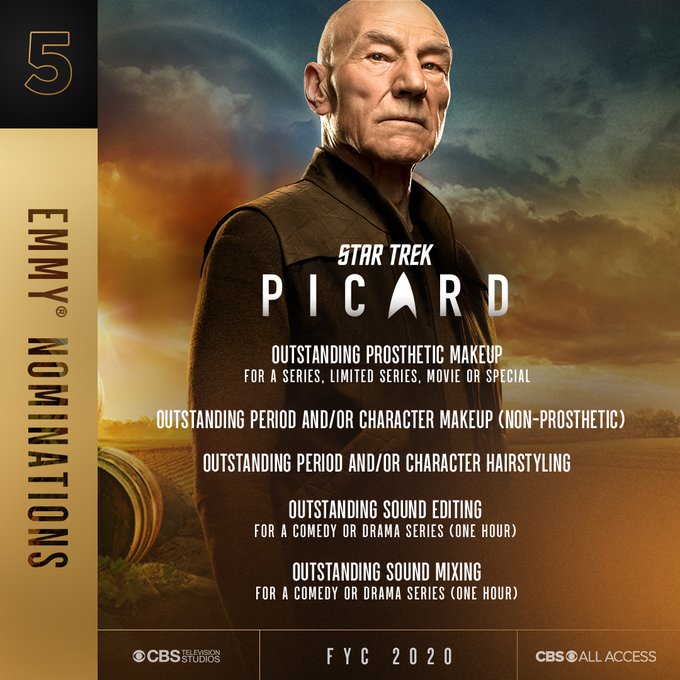 I like to play one of these things is not like the others when I can, and the opportunity to do so presents itself in this category. In this case, the odd nominee out is "Star Trek: Picard," where the nomination is for character hairstyling, not period. As much as I'm rooting for it, I'm pretty sure it's between "The Crown" and "The Marvelous Mrs. Maisel," the former because of Hollywood's Anglophilia and the latter because its the returning winner and Hollywood's bias in favor of shows about entertainment. That should work for "Hollywood," as Hollywood loves a good story about itself, even if it's not particularly flattering, but that works if all other things are equal and I'm not sure about that.

The same episode of "Star Trek: Picard" is nominated in the next category.

Once again, last year's winner "Game of Thrones" is not competing, so the field is open. I don't know if it's open enough for "Star Trek: Picard" to win, but I think it has a better chance to win than in the previous category. Still, the returning nominees are "American Horror Story" and "The Marvelous Mrs. Maisel." I suspect the latter has the advantage.

Now for the one category in which "Star Trek: Picard" and "The Mandalorian" are directly competing.

On the one hand, last year's winner "Star Trek: Discovery" is not nominated (I expect it will return next year). On the other, it's still Star Trek, so I think the advantage still applies to "Star Trek: Picard." Here's to Seven of Nine's implants helping the show win over "The Mandalorian," "American Horror Story: 1984," and "Westworld."

Now for a category where I have a favorite even though I haven't done enough research.

Martin Phipps for The Crown (Episode: "Aberfan") (Netflix)
Labrinth for Euphoria (Episode: "Bonnie and Clyde") (HBO)
Ludwig Göransson for The Mandalorian (Episode: "Chapter 8: Redemption") (Disney+)
Danny Bensi and Saunder Jurriaans for Ozark (Episode: "All In") (Netflix)
Nicholas Britell for Succession (Episode: "This Is Not for Tears") (HBO)

On the one hand, Nicholas Britell won Outstanding Original Main Title Theme Music last year for "Succession." On the other, Ludwig Göransson won the Oscar for Music (Original Score) for "Black Panther." In a field where none of last year's nominees repeated, I'd say those were safe ways to handicap this category. Between the two, I'm rooting for Göransson's work in "The Mandalorian. I'll embed a video at the end of the post.

As I usually write in situations like this, vote splitting can work against series with multiple nominations in the same category unless the electorate settles on a best choice out of those available. If that becomes an issue, it helps "Stranger Things" over "The Mandalorian," "Ozark," and "Succession." If not, then I'm torn between "The Mandalorian" and "Ozark." Three nominations for "The Mandalorian" makes the case for its consistent superiority, but that may not be enough.

Now the first of three categories in which "The Mandalorian" is competing against "Space Force."


Outstanding Production Design for a Narrative Program (Half-Hour or Less)

As much as I'm rooting for "The Mandalorian," "Space Force," and comedy horror nomine "What We Do in the Shadows," they're up against former winner "GLOW" and consistent nominee "Will & Grace." Of all the speculative fiction nominees, I think "The Mandalorian" has the best chance, but that's not enough for me to say it's the favorite.

The next four categories show why "Star Trek: Picard" and "The Mandalorian" compete against each other in only one category — program length.


Outstanding Sound Editing for a Comedy or Drama Series (One-Hour)

I'm glad to see "The Boys" earn a nomination and it deserved it in this category. Still, even though I'd be happy for it, "Star Trek: Picard," and especially "Westworld" to win, "Stranger Things" has won this award both of the previous times it was nominated and I expect it will win again.

On the other hand, "Westworld" is the only previous winner in this field, so I think it's favored here.

Now the sound nominations for the shorter shows.

The only returning nominee is "What We Do in the Shadows," but I don't think that's enough to make it the favorite. Instead, I think "The Mandalorian" has an advantage because of its win at the Golden Reel Awards.

The same rationale leads to my saying "The Mandalorian" is the favorite, here, too.

"Westworld" is the only previous winner, while "Lost in Space" and "Stranger Things" are previous nominees. Having written that and seen all the nominees, I'm tempted to say "Watchmen" is favored. It's its year. Sorry, Mando, "this is the way" of Hollywood.

"The Blacklist" and "S.W.A.T." are returning nominees and "The Blacklist" is a previous winner, so that might be enough to propel one of them, most likely "The Blacklist," over the speculative fiction nominees "The Mandalorian" and "Stranger Things." I hope not, but I'm not optimistic.

I'll have more to say about "The Mandalorian" when I cover the Primetime Emmy Awards nominations for drama series. Stay tuned for that.

I conclude by being a good environmentalist and recycling my conclusion from Star Wars drinks and music for the Revenge of the Sixth. Here's The Mandalorian by Ludwig Göransson.


The Mandalorian · Ludwig Göransson
I have spoken.