I told my readers to "stay tuned for the Drama Series nominees tomorrow" at the end of 'Schitt's Creek' vs. 'The Marvelous Mrs. Maisel' — Outstanding Comedy Series nominees that use politics and government for laughs, so, without any further ado, here are the nominations for drama series at the 72nd Primetime Emmy Awards. 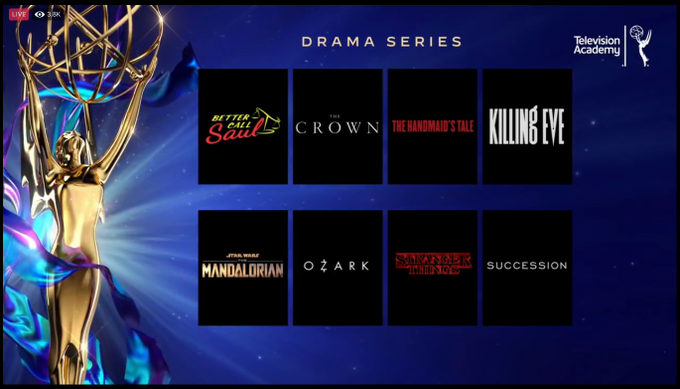 As I have in the past two installments, I begin my commentary by being a good environmentalist and recycling.

The protagonists of "Better Call Saul" are lawyers, not government employees, but they work in courtrooms and deal with law enforcement, so a government function plays an important part in the show...."Succession" concentrate[s] on family dynamics...but politics and government contibute important, if secondary, plot elements...Rupert Murdoch and his children helped inspire the family in "Succession" and the Murdochs are as much about politics as they are about media.
...
Both the Galactic Republic and the remnants of the Galactic Empire, which will eventually become the First Order, appear in "The Mandalorian" with the agents of the government of the Dark Side promising to play an important part in the second season.
...
The rest of the nominees all deal with politics and government in some way, some more directly than others. "The Crown" continues its dramatization of the reign of Queen Elizabeth II with a new cast...

The same is true of the remaining nominees in the Emmy field. "Killing Eve" sets its tale of twisted romance inside a spy thriller. So does "Stranger Things," as the horror turns out to be part of a Soviet plot. "The Handmaid's Tale" is one of a dystopian theocratic future. Finally, "Ozark" plays lots of local politics.

I didn't say which nominee would win at the Television Critics Association (TCA) Awards, but I think it will be "Succession." It won Outstanding Achievement in Drama at the TCA Awards and both Drama Series and Drama Episode at the Gold Derby Awards. HBO has found a new awards favorite now that "Game of Thrones" is over.

Follow over the jump for the nominations for acting, directing, and writing. 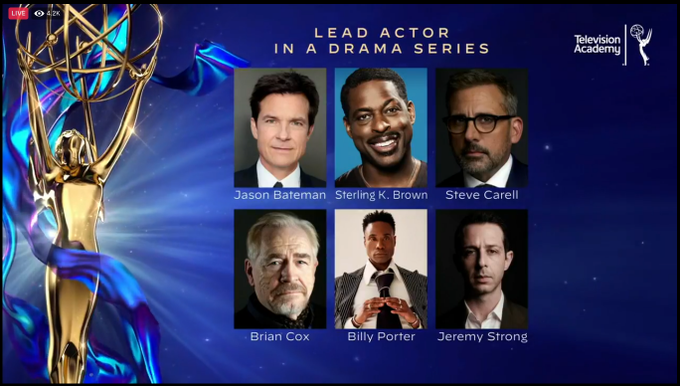 I begin by recycling from the TCA Awards.

"The Morning Show"...examine[s] social issues...through the news...but..[has] political issues making cameo appearances..."Pose" explores the politics around the AIDS epidemic in the 1980s.

Billy Porter won this award last year, so he's the nominal favorite, but he's competing again against previous winner Sterling K. Brown and potential upset winner Jeremy Strong. Personally, I'm rooting for Jason Bateman, although he may be a better director than an actor. As for the Gold Derby Awards, they're no help. Sam Heughan from "Outlander" won their award and he wasn't even nominated for an Emmy. The fans love "Outlander." The professionals, not so much. 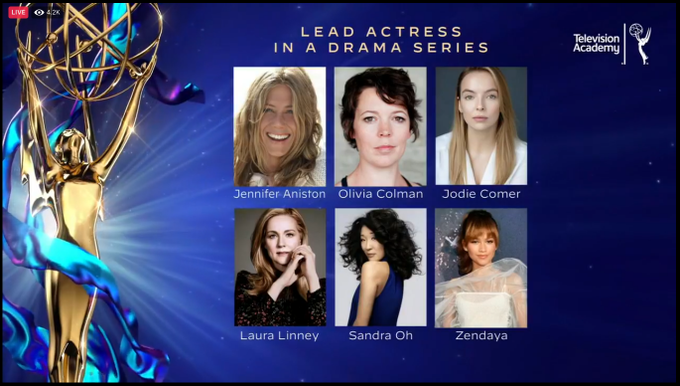 For the last time this post, I recycle to begin my analysis.

"Euphoria" is the least overtly political of the nominees, but the setting is East Highland High School, a public institution, so a government facility is the setting. Remember, public eduction, like law enforcement and the military, is part of government.

Jodie Comer won this award last year, much to my surprise, so she's the nominal favorite. Her strongest competition appears to be Laura Linney from "Ozark," who won the equivalent category at the Gold Derby Awards, and Oscar winner Olivia Colman. Of the three of them, I'm hoping for Linney.

"Westworld" turned political this season, as the hosts left the part to spread their robot revolution worldwide. In the process, they discovered that an AI has been influencing, even coercing, politicians and directing human affairs for decades and have decided to free humanity from it. While I may be rooting for Jeffrey Wright as Bernard Lowe, I don't think the "Westworld" actor will win. Giancarlo Esposito has a better chance, and even he won't win. Instead, I think it will be one of the actors from "Succession" if vote splitting doesn't do them all in. Of them all, my choice would be Kieran Culkin.

By the way, the Gold Derby Awards once again provided no help. The winner in the equivalent category there was Tom Pelphrey of "Ozark," who also wasn't nominated here. What a snub!

I think this category has an interesting and competitive contest for the trophy. The last two winners of this award, Julia Garner as Ruth Langmore from "Ozark" and Thandie Newton as Maeve Millay from "Westworld," are both nominated. So are previous winners for the same roles in different categories, Laura Dern for Supporting Actress in a Limited Series and Samira Wiley for Guest Actress in a Drama Series. Making things more interesting are multiple-Oscar-winner Meryl Streep, Gold Derby winner Helena Bonham Carter, and likely beneficiary of a "Succession" sweep Sarah Snook. The only nominee I would count out is Fiona Shaw. As for who I want to win, it's Newton, Garner, Wiley, and Carter in that order, but the field is wide open.

Now for the talent behind the camera.

"Ozark" won this last year and "The Crown" the year before that, so I would say that they are the nominal favorites. However, those were different directors, so I'm not so sure about that. I wouldn't be surprised if "Succession" pulls off an upset.

Outstanding Writing for a Drama Series

The "Succession" episode "This Is Not for Tears" won Drama Episode at the Gold Derby Awards, so that puts it in a good position, especially if "Better Call Saul" and "Ozark" suffer from vote splitting. It also helps that "Succession" is the returning winner in this category. That written, I'd prefer one of the "Ozark" episodes winning, but I'm not optimistic.

Previous posts about the 2020 Primetime and Creative Arts Emmy Awards
Posted by Pinku-Sensei at 12:28 PM