Clinton wins the news media while Sanders wins the Internet

According to the politicians, pundits, and journalists for the mainstream press, Hillary Clinton won the debate.  Daily Kos summarized that result in Hillary Clinton had the debate she needed, at least to shift the media narrative.


The media wanted a dramatic narrative—for Clinton to fall on her face or to dominate. Since she did well, she's getting what might be an exaggerated domination narrative. Reviews of Sen. Bernie Sanders' performance were more mixed, though generally on the positive side. And of course, he produced the most memorable line of the night—that "The American people are sick and tired of hearing about your damn emails"—though it's being chalked up more to Clinton's benefit than to his. But commentators were quick to note that Sanders struggled a bit on gun control ... and of course, he faced some creepily red-baiting questions from Anderson Cooper. In true Sanders fashion, he mostly swept aside Cooper's more personally directed questions to focus on the issues, but he wasn't able to redirect the media narrative in the way Clinton did.

That narrative was reflected in CNN's First Democratic debate: How did they do?

The five Democratic candidates took the debate stage -- how did they do? John Berman reports.

The order and time devoted to each of the candidates tells the order in which CNN ranked the candidates, even if the cable outlet didn't come right out and say so.  FiveThirtyEight was no different, ranking the candidates exactly the same as CNN's report, even as they skeptically declared The Media Underestimated Hillary Clinton, But Overestimated Her Debate.  Even I got that impression based on the candidates making the right enemies.  However, Clinton did not win over the Democratic voters willing to make their opinions known in the Internet.  Follow over the jump.

Going back to Daily Kos, their poll has Sanders first with 57%, Clinton second with 37%, O'Malley third with 2%, and Webb and Chafee both at 1%, although Webb edges out Chafee on votes.  A summary of polls by TeleSUR showed that the readers and viewers of Fox News, Slate, and the Washington Post also had Sanders in first.FiveThirtyEight passed along this animation displaying Google searches for the candidates during the debate showing much the same phenomenon.

The Washington Post via TeleSUR showed that Sanders didn't just beat the Democrats on Google.

Sanders beating Trump on Google is having an effect, but I'll save it for a future post.

Sanders also won Twitter, gaining more followers during the debate than the other four candidates combined. 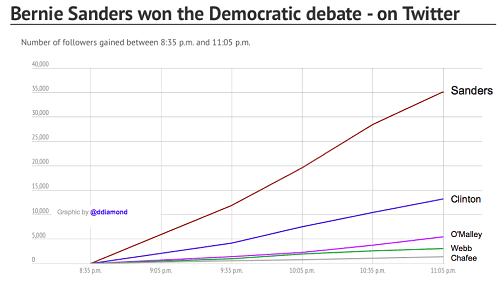 The one online venue where Sanders didn't win was Predictwise.  There, as FiveThirtyEight reported, Clinton's odds of winning the nomination went up.  Before the debate, her odds were 69-70%.  Afterwards, they shot up to 77%.

The money is still on Clinton for the long term, even most people online thought Sanders won the debate.
Posted by Pinku-Sensei at 9:29 AM