After winning the awards, the series returned Sunday with an examination of the Trump Foundation and comparing it to the Clinton Foundation.  It demonstrated that the show deserved all of its awards.  Watch Scandals: Last Week Tonight with John Oliver (HBO) and see if I'm wrong.

The 2016 presidential race is teeming with raisins. Sorry…scandals.

"Ethical failings in a politician are like raisins in a cookie," Oliver added. "They shouldn’t be there. They disgust people. But most politicians have at least a few raisins.

"Hillary is a cookie like this one," Oliver said, pulling out one raisin cookie. "She arguably has more raisins than average. There’s probably 10 of those little fuckers in there."

"But we all need to remember that when it comes to Donald Trump, this is the amount of raisins that he represents," Oliver explained, as hundreds of raisins rained on top of him. "The man is a fucking raisin monsoon. He is ethically compromised to an almost unprecedented degree."
...
"If you don’t like raisins, I get it — they’re disgusting," Oliver said. "But unfortunately, this November, you’re going to have to swallow 10, or we’re all going to be eating this shit for years."

I'll resume posting about the actual news and documentary Emmy winners tomorrow, although it felt like I was just writing about the best news program on TV today, even if it is considered entertainment.  Once again, congratulations on the show's three Emmy Awards! 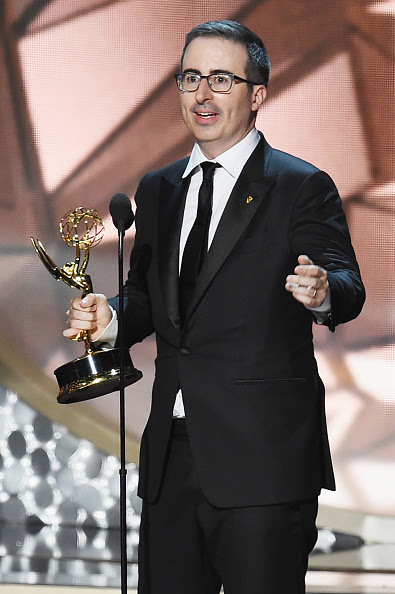