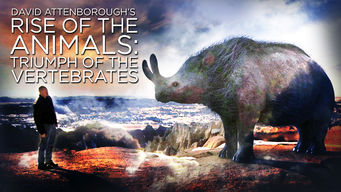 As I mentioned in Al Jazeera America's final Emmy nominations, the News and Documentary Emmy Awards were given out Wednesday night.  Unfortunately, Al Jazeera America didn't win any.  That doesn't mean that I found the awards disappointing.  Quite the contrary, since I've started paying attention, I've found worthwhile shows that I can share with my classes, whether about Snow Monkeys or Your Inner Fish.  This year, the winner that caught my eye was Smithsonian Channel's "Rise of Animals: Triumph of the Vertebrates," which earned Outstanding Nature Programming.  Not only is it excellent informative television, it gives me a chance to write about fossils.

Smithsonian Channel has obligingly loaded several videos from the show to its YouTube channel, begining with Sir David Attenborough answering the question When Did Our Backbones First Appear?

When did vertebrates emerge, asks David Attenborough? An exciting fossil find in China points to a 525-million year old sea-dweller who used its new backbone to swim nimbly away from predators.

I can definitely use this in class.

The next major milestone in vertebrate evolution appears in This Crawling Prehistoric Fish Had Some of the First Limbs.

A flexible neck and powerful jaws helped early shallow-water predators catch prey. But their limb-like fins would propel them beyond their watery environment.

I already have videos about Tiktaalik, but this covers the fish from a different perspective, its ecology as much as its evolution.

Mammals didn't used to be at the top of the food chain. See how one key adaptation gave them a leg up on their reptilian contemporaries.

Sir David mentions Hadrocodium again to set the context for Rare Footage of Baby Platypuses Hatching, which shows that the earliest mammals may have been warm-blooded, furry, and milk-producing, but they still laid eggs, like their montreme descendants.

Monotremes are the only mammals left that lay eggs. This video of newly hatched baby platypuses and echidnas is one of few that documents this incredible process.

I didn't have enough material about monotremes in my lectures.  This video might just fix that.

Sir David fast-forwards to the Cenozoic in Many Animals Died by This Lake. Why?

The Messel Pit is one of the most remarkable fossil excavation sites in the world. But what accounts for the sheer volume of animal skeletons found there?

A prehistoric death trap--I'm quite familiar with those, having worked at Rancho La Brea, where I met Sir David nearly 30 years ago.  That's a story for another entry.  Right now, I'm finishing this post with The Sneaky Reason Why Plants Bear Fleshy Fruit.

Many plants rely on the wind to transport their seeds. However, in thick forests this system proved difficult. How did plants solve the problem?

That's an excellent lesson on co-evolution and a good one on which to end this entry.

I'll have more on the other winners next week, possibly beginning with Sunday's entertainment entry.  In the meantime, I plan on posting a driving and gas price update tomorrow.  Stay tuned.