Infidel 753 and I talk fossils

Last week, Infidel 753 namechecked my blog to begin Ten years -- a bit of blowing my own horn.


Some blogs such as Crazy Eddie and Politics Plus post regular digests of their statistics, which give a glimpse of what interests their readers and where those readers are drawn from.  I haven't ever done that, but having just reached my ten-year anniversary, I took a look back at the whole history of the blog via the stat counter, out of curiosity.

I expressed my gratitude in the comments.


Congratulations on ten years of blogging! I'm flattered to be mentioned as an example of posting regular digests of my statistics and of playing a minor part in inspiring you to write this entry.

That's not what really caught my eye.  This was.

#5, #3, and #2 are explained here, and I guess a lot of people see something I've written elsewhere on the net (I use the name "Infidel753" almost everywhere) and look me up.  Aside from that, I'm baffled by these.

Those search terms reminded me that I have been ignoring one of my areas of expertise.


As for "eurypterids" being the second most used search term for your blog, I'm envious. Mine is "game of thrones dungeons and dragons." I'm the paleontologist and you get the traffic for a prehistoric animal? Of course, it might help if I actually blogged more about extinct organisms. Most of my posts with the paleontology label are about the Jurassic Park/Jurassic World movies.


You're a paleontologist? That had slipped by me. Well, feel free to borrow the eurypterids -- perhaps they'll prove a critter of good internet fortune for you as well.

Here's the photo in question. 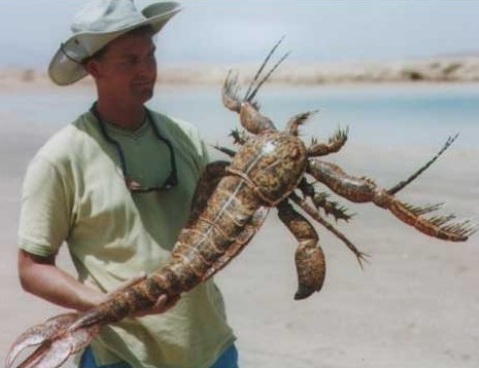 I may have recalled the show's title as "Swimming with Sea Monsters," but it's really called Sea Monsters: A Walking with Dinosaurs Trilogy.

Infidel encouraged me in his final reply.


I'd definitely be interested in a fossil snail post. And I'm glad you also appreciate Lady Gaga.

Thank you, Infidel.  I've already borrowed the eurypterids and blogged about Lady Gaga.  I'll have to write about fossil snails, not just living ones.  Stay tuned.

P.S. Infidel wasn't the only blogger inspired at least in part by my example.  Paul W. of You Might Notice a Trend referred to both Infidel and me in Ten Years Blogging And All I Got to Show For It Is a T-Shirt.  Their examples inspired me.  Sometimes inspiration circles back to its source.
Posted by Pinku-Sensei at 10:27 AM