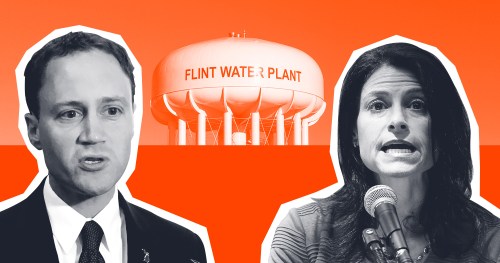 Two days ago, I wrote that Michigan joining a 16-state lawsuit against national emergency declaration was "one of the reasons I voted for Michigan Attorney General Dana Nessel."  Another was how she would handle the Flint Water Crisis.  Yesterday, Nessel showed the kind of action I was hoping for from her about this scandal and others, as WXYZ reported Wayne County Prosecutor Kym Worthy joins Flint water crisis investigation.

Wayne County Prosecutor Kym Worthy has been added to the team investigating and prosecuting the criminal cases involved in the Flint Water Crisis. Michigan Solicitor General Fadwa Hammoud made the announcement on Thursday in Lansing as Michigan Attorney General Dana Nessel updated the Flint investigation, the investigation into Michigan State and Larry Nassar, and the Catholic church sex abuse investigation.

I'm glad to see both Attorney General Nessel and Solicitor General Fadwa Hammoud becoming more involved in the prosecution of the people responsible for the Flint Water Crisis.  I was very cynical about how the former Attorney General Bill Schuette handled this case and think Nessel's more direct approach is a necessary improvement.  As for the two sexual abuse scandals, I mentione the one involving the Catholic Church in Failures and abuses of government and adult leadership unite Outstanding Television Movie nominees at the 2018 Primetime Emmy Awards but avoided the one involving Larry Nassar and MSU until now.  Since it has become an issue of governance instead of a sexual abuse scandal in sports, I expect I might write more about it now.

Michigan Attorney General Dana Nessel is pledging to push for justice in three major investigations her office is overseeing, including the Flint water crisis.

Both reports remind me that I promised to follow the case of the Michigan state health director to standing trial for manslaughter in Flint Water Crisis deaths.  Fortunately, Fox 47 in Lansing provided an update in Former MI health officials due in court.

Two top health officials to former governor Rick Snyder are expected to be in court on charges connected to the Flint Water Crisis on Friday.

The wheels of justice are grinding slowly in this case, but I expect they will indeed grind exceedingly fine.  Stay tuned.
Posted by Pinku-Sensei at 3:38 PM