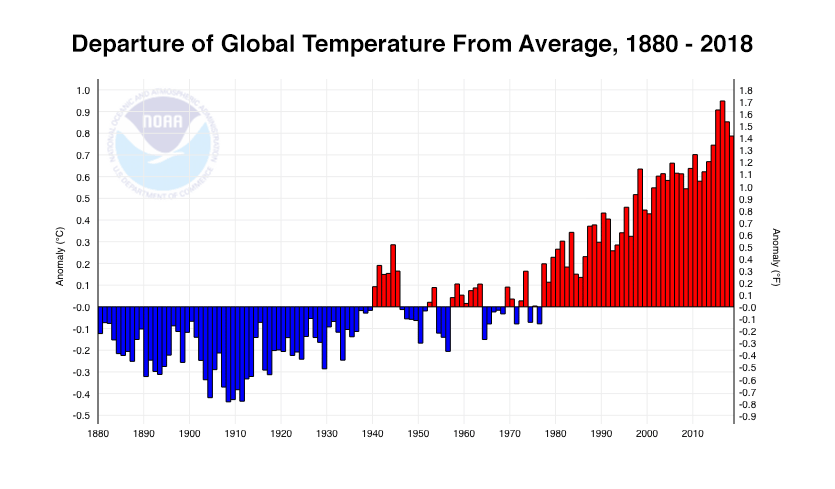 In August, I wrote 2018 on track to be fourth-warmest ever.  That happened, as NASA Climate Change (yes, that's a real channel) reported yesterday 2018 fourth warmest year in continued warming trend, according to NASA, NOAA.

2018 was the fourth hottest year in the modern record, part of a decades-long trend of warming. The record dates back to 1880, when it became possible to collect consistent, reliable temperatures around the planet. NASA and NOAA work together to track the temperatures, part of ongoing research into our warming planet.

As I wrote back in August, "About the only good news is that this year will be cooler than 2017, the second hottest year on record according to NASA."  The bad news is that 2019 could be the hottest year ever because of El Nino, as USA Today's 2018 temps were Earth's fourth-hottest ever reported.

“2018 is yet again an extremely warm year on top of a long-term global warming trend,” according to NASA's Gavin Schmidt, the director of the agency's Goddard Institute of Space Studies.

Specifically, NASA said global temperatures in 2018 were 1.5 degrees Fahrenheit above the average from 1951 to 1980.

Yikes!  Expect more extreme weather.  The silver lining might be that we will have that early spring the groundhogs forecast.  Stay tuned.
Posted by Pinku-Sensei at 8:44 AM