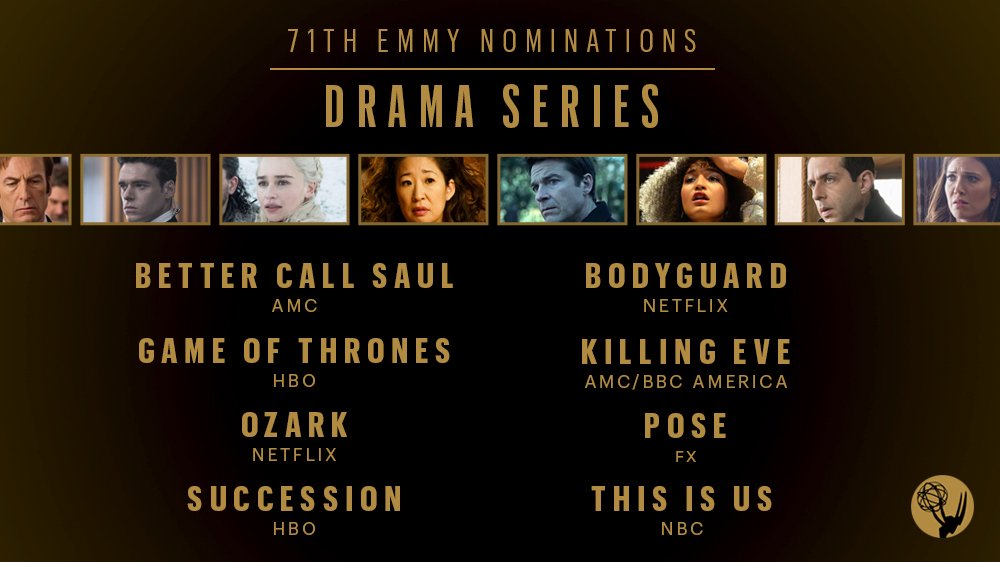 I wrote "I'll see if I can manage to write about the drama series nominees next" at the end of Outstanding Limited Series nominees show failures of government, large and small.  Reality intervened in my examination of excellent fantasies when Bill de Blasio dropped out of the Democratic Presidential nomination contest.  That happens.  Now that I've covered the latest election news, it's time to leave reality behind to find the best fantasy.  In this case, I mean that literally, as "Game of Thrones" is not only the most nominated drama series this year, but the most nominated season of any show not just this year, but for all time.  Don't believe me?  Ask Deadline Hollywood.


The 71st annual Primetime Emmy Awards nominations were revealed Tuesday, with returning drama series champ Game of Thrones back in the mix in a record way.

The HBO epic, which wrapped its final season this year, set a new benchmark with 32 total nominations, the most for any program in a single season (beating NYPD Blue‘s previous mark). The series returns to the Best Drama series fight and also scored lead acting noms for Kit Harington and Emilia Clarke, along with a slew of supporting noms — seven of the 12 slots in those categories went to GoT actors including Peter Dinklage returning to defend his title.

In addition, "Game of Thrones" won Best Fantasy Television Series at the Saturn Awards, so it really is the best fantasy.


Game of Thrones led all television shows with nine nominations and was named the best fantasy series on television for its finale season. The Game of Thrones cast also dominated acting categories in its medium. Emilia Clarke, who portrayed Daenerys Targaryen on the HBO series, won the best television actress award. Peter Dinklage won best supporting actor on television for his role as Tyrion Lannister, besting a field of nominees that included his on-screen brother, Nikolaj Coster-Waldau.

The prize for best younger actor on television went to Maisie Williams, who portrayed Ayra Stark, the girl warrior of destiny on the fantasy series based on the books of George R.R. Martin.

I'll be honest; I didn't vote or predict any of these wins, although when I examined "Game of Thrones" and the rest of the fantasy nominees, I did write "If I really wanted to vote the professional's choice, I would vote for Peter Dinklage" and "I'm torn between Maisie Williams and David Mazouz," so these results weren't a complete surprise to me.

I'll get back to "Game of Thrones" when I report more fully on the Saturn Awards winners.  It's time to watch 71st Nominees: Outstanding Drama Series.

The Nominees for Outstanding Drama Series are Better Call Saul, Bodyguard, Game of Thrones, Killing Eve, Ozark, Pose, Succession, and This Is Us.

My personal favorite is "Ozark," which turned into a very political show during its second season after being a crime drama in the vein of "Breaking Bad" during its first, but that doesn't mean it's going to win.  Instead, I'm sure "Game of Thrones" will win this award one last time, repeating last year's victory.  That's despite the Television Critics Association voting for "Better Call Saul" for Outstanding Achievement in Drama while nominating "The Good Fight" instead of "Game of Thrones."

Both "Game of Thrones" and "Ozark" are explicitly about government and politics, but so are "Bodyguard" and "Killing Eve," while "Better Call Saul" is government-adjacent as it takes place in the court system and "Pose" makes a politically significant social point.  As for "Succession" and "This Is Us," they're both about family dynamics, although even "Succession" is also about politics as the clip above shows.

Now for the acting categories, beginning with 71st Nominees: Outstanding Lead Actor in a Drama Series.

Once again, my personal favorite is Jason Bateman of "Ozark," but I don't think he'll win.  I'm also not sure that there will be enough "Game of Thrones" enthusiasm to sweep Kit Harington onstage to accept the award; he couldn't even beat Sam Heughan of "Outlander" at the Saturn Awards.  Instead, I'm going with the only previous winner for the same role, Sterling K. Brown, who won this award two years ago.

If it were up to me, I'd vote for Laura Linney {"Ozark"), Sandra Oh ("Killing Eve"), Viola Davis ("How to Get Away with Murder"), or Robin Wright ("House of Cards"), in that order.  I even voted for Sandra Oh at the Saturn Awards.  I doubt the Television Academy voters agree with me.  On the one hand, Viola Davis is the only previous winner for the same role, winning four years ago.  On the other hand, Emilia Clarke might just get swept onto the stage.  On the gripping hand, a lot of people thought Sandra Oh should have won last year and did win a Golden Globe, so my second choice has a chance, even if her co-star Jodie Comer might split the vote.

Peter Dinklage won this award last year and I think he'll win again this year, so off to the next category: 71st Emmy Nominees: Outstanding Supporting Actress in a Drama Series.

The only one I considered voting for at the Saturn Awards was Maisie Williams and that because Julia Garner from "Ozark" wasn't nominated but I don't think either are favored.  Instead, I expect Lena Heady will win.


Outstanding Directing for a Drama Series

Adam McKay is the one Emmy nominee who also has an Oscar nomination to his credit, which might count for something, but David Nutter won this award in 2015 for "Game of Thrones," which I think counts for more.  If not him, then I wouldn't be surprised if one of the other two directors nominated for "Game of Thrones" episodes wins instead.


Outstanding Writing for a Drama Series

I think this is between David Benioff and D. B. Weiss for "Game of Thrones" and Bruce Miller and Kira Snyder for "The Handmaid's Tale," as Benioff, Weiss, and Miller are all previous winners of this award.  Given a choice, I pick Benioff and Weiss.

Follow over the jump for the awards already won by drama series at the Creative Arts Emmy Awards.

"Star Trek Discovery" finally won an Emmy for Outstanding Prosthetic Makeup for a Series, Limited Series, Movie or Special.  As Doug Jones said at the Saturn Awards last week, "it takes a village to make a Kelpian."  Congratulations!

I predicted that "Succession" would win Outstanding Original Main Title Theme Music and it did.  Considering that Nicholas Britell earned an Oscar nomination for "If Beale Street Could Talk" makes his win even less surprising.  To celebrate, here is Succession Soundtrack - "Succession Main Title" - Nicholas Britell.

It only took me one listen to convince me that this deserved the Emmy.


I should have one more nomination post for comedies.  Stay tuned.