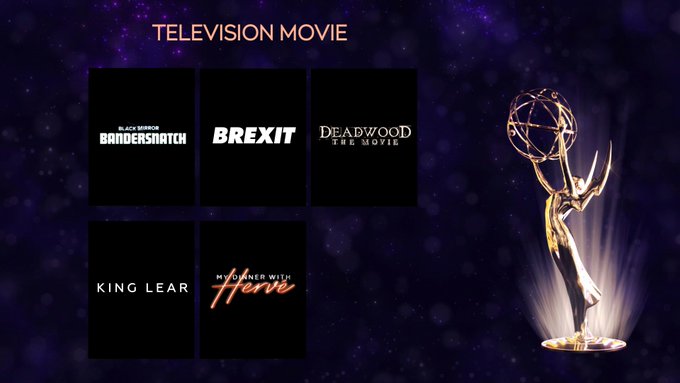 "Stay tuned," I told my readers at the end of 'Queer Eye' wins four Emmy Awards, as "I plan on looking ahead to the nominations for television movies and limited series.  As I started researching both categories, I remembered why I wrote about the television movie and limited series nominees separately last year; despite the overlap in the individual achievement categories, combining the two was too much work.  Therefore, I'm doing the same thing this year and looking at the movie nominees first.

The Nominees for Outstanding Television Movie are Bandersnatch (Black Mirror), Brexit, Deadwood: The Movie, King Lear, and My Dinner With Hervé.

After looking at science, diversity, and political satire, I finally get to write about an Emmy nominee that is speculative fiction, "Black Mirror."  It's the one I'm rooting for, as it's both the two-time returning winner as well as the current holder of a Golden Coffee Cup for television as Best Miniseries or Movie for Television about Politics and Government.  It's also the only nominee to win an individual achievement award at the Creative Arts Emmys, Outstanding Creative Achievement In Interactive Media Within A Scripted Program.  The rest came up dry last weekend.

The other nominees, "Brexit," "King Lear," and "My Dinner with Hervé," only have the one nomination for Outstanding Television Movie, so I'm not too worried about their winning.  Too bad, as "Brexit" is a topical examination of the origins of an ongoing political crisis and "King Lear" is a classic.  As for "My Dinner with Hervé," it's an example of Hollywood nominating a good story about itself.  However, I think it's the weakest of the lot.

I plan on returning later this week with the limited series nominees, especially "Chernobyl," which has already won seven Emmy Awards in technical categories.  Why not tomorrow?  It's Talk Like a Pirate Day.  Arr!