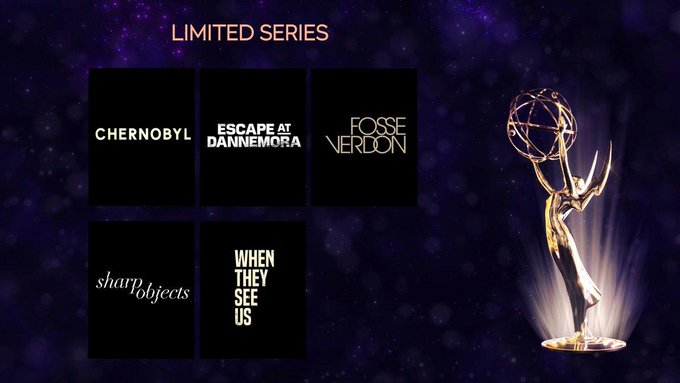 I told my readers at the end of The 2019 Outstanding Television Movie nominees examine politics, technology, and show business "I plan on returning later this week with the limited series nominees, especially "Chernobyl," which has already won seven Emmy Awards in technical categories."  Now that Talk Like A Pirate Day is over, it's time for me to follow through.

The nominees for Outstanding Limited Series are Chernobyl, Escape at Dannemora, Fosse/Verdon, Sharp Objects, and When They See Us.

Four of the five nominees depict failures at some level of government, ranging from the catastrope of "Chernobyl" through the miscarriage of justice in "When They See Us" to the incompetence in "Escape at Dannemora" and "Sharp Objects," while the fifth, "Fosse/Verdon," is about show business.  The most nominated with 19 nominations as well as the most winning so far with seven Emmy Awards is "Chernobyl," the fictionalized story of the meltdown of the nuclear reactor, with 19 nominations.  "Fosse/Verdon" is the next most nominated with 17 nominations and the second most winning with three statuettes, followed by "When They See Us" with 16 nominations and one trophy.  "Escape at Dannemora" has twelve nominations while "Sharp Objects" has eight nominations; neither has any wins so far.

My personal favorite is "Sharp Objects," but I think its best chances are for Outstanding Lead Actress and Outstanding Supporting Actress.  It's not going to win this category.  Instead, I think this contest is among the three nominees that already have awards, "Chernobyl," "Fosse/Verdon," and "When They See Us" with "Chernobyl" favored.  However, I think it will be close, as "When They See Us" is just as well acted and about an issue closer to home, literally, while "Fosse/Verdon" enjoys the advantage of being about entertainment, albeit musical theater, not movies and television.  All things being equal, that would give it a good chance of upsetting the other two leaders, but I'm not sure all things really are equal.

Now for the acting nominations, beginning with 71st Nominees: Outstanding Lead Actor in a Limited Series or Movie.

This category features a match-up between two Oscar winners, Sam Rockwell and Mahershala Ali.  I think they are the favorites with a slight edge to Ali, who has won two Oscars to Rockwell's one.  This is also his second Emmy nomination to Rockwell's first.

By the way, this is one of two nominations for another limited series, "A Very British Scandal."  This is also about a failure of government, or at least politics, so it fits the overall theme.

Next, 71st Nominees: Outstanding Lead Actress in a Limited Series or Movie.

This is another category featuring Oscar nominees and winners.  Amy Adams is my personal favorite who has been nominated several times for an Oscar but never won.  She's competing against Patricia Arquette, who has won an Oscar.  Furthermore, both are contending with a very strong field including the Television Critics Association's choice, Michelle Williams from "Fosse/Verdon," who won Individual Achievement in Drama.  Any one of them could win along with Joey King for "The Act."

The biggest names here are Stellan Skarsgård and John Leguizamo, but I'm not sure they're favored.  If it were up to the fans who responded in the comments, I think Asante Blackk could win.  However, this is not the People's Choice Awards, where they would be voting.  Instead, it's the entertainment industry professionals, so I think it will be one of Skarsgård and Leguizamo.

Patricia Arquette has a second nomination for "The Act," where the clip shows her as a stage mother of sorts who projects her illness on her child.  One of the plot twists of "Sharp Objects" is that Patricia Clarkson's character has the same flaw and does the same to her daughters.  Emily Watson's character is more admirable as the Soviet physicist in "Chernobyl."  I'd say she would be favored on her performance alone, but she's probably not as well known to the Emmy electorate as Vera Farmiga, who plays the prosecutor in "When They See Us."  Too bad, as she is probably the most heroic of the field.


Outstanding Directing for a Limited Series, Movie, or Dramatic Special

While I think "Chernobyl" is the best miniseries, I'm not sure Renck is the best director.  That goes to Ava DuVernay.  Whether she will be recognized for it is another story.  Ben Stiller is also known to the Emmy electorate, but mostly for his acting and writing.  I'm not sure that will translate to his directing.


Outstanding Writing for a Limited Series, Movie, or Dramatic Special

I'm rooting for "Chernobyl," but I really have no idea.  DuVernay and Michael Starrbury could just as easily walk away with the trophy.

Follow over the jump for the  awards already won by limited series at the Creative Arts Emmy Awards.

The strength of the nominated performances in "When They See Us" shows that it deserved Outstanding Casting for a Limited Series or Movie.  The show has seven acting nominations.  Wow!

The official audio of Cabaret by Fosse/Verdon Cast from ‘Fosse/Verdon’ on FX Networks.

That's it for the limited series.  I'll see if I can manage to write about the drama series nominees next.