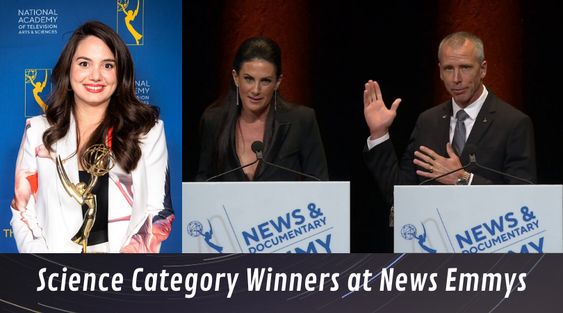 
Right after that, the two astronauts presented Outstanding Science, Medical or Environmental Report.

I appreciate her explanation of the importance of what The Weather Channel is doing.  They don't simply exploit risk for viewers.

In addition to winning an Emmy, the segment provided the finale of Last Week Tonight - And Now This: The Weather Channel's Graphics Department Is Insane.

From the October 7, 2018 episode of "Last Week Tonight with John Oliver".

I'm pretty sure that The Weather Channel will not "take it down a notch" as long as their use of graphics is winning awards.  As I first wrote in Did Hurricane Irene live up to the hype? The numbers say yes eight years ago, "expect more dramatic coverage from The Weather Channel in the future, not less."  This award says I was right.

The final category the astronauts presented was Outstanding Science and Technology Documentary.

I'm glad to see "Science Fair" win.  I first mentioned it in 'Dark Money,' 'Hitler's Hollywood' and 'RBG' lead Best Political Documentary nominees at the 2018 Critics' Choice Documentary Awards and again in The highest grossing and most honored political documentaries of 2018.  As I wrote in the first link, "I like the first because I teach science, while the second is a more serious film that examines the effects of mandatory minimum sentencing.  Both public education and prisons are functions of government and the laws that govern both are political issues."

I have a few other News and Documentary Emmy Award winners I wish to write about, but only after election coverage and a driving update.  Stay tuned.

Previous entries in this series