As I told my readers at the end of Biden Administration declares monkeypox a public health emergency, "Stay tuned for this year's post about Saturday Night Live's Emmy nominations for the Sunday entertainment feature." With that, here the nominations for the show that provided the videos for half of last year's top ten posts, including all of the top three and four of the top five, beginning with the ones at the 74th Primetime Emmy Awards. 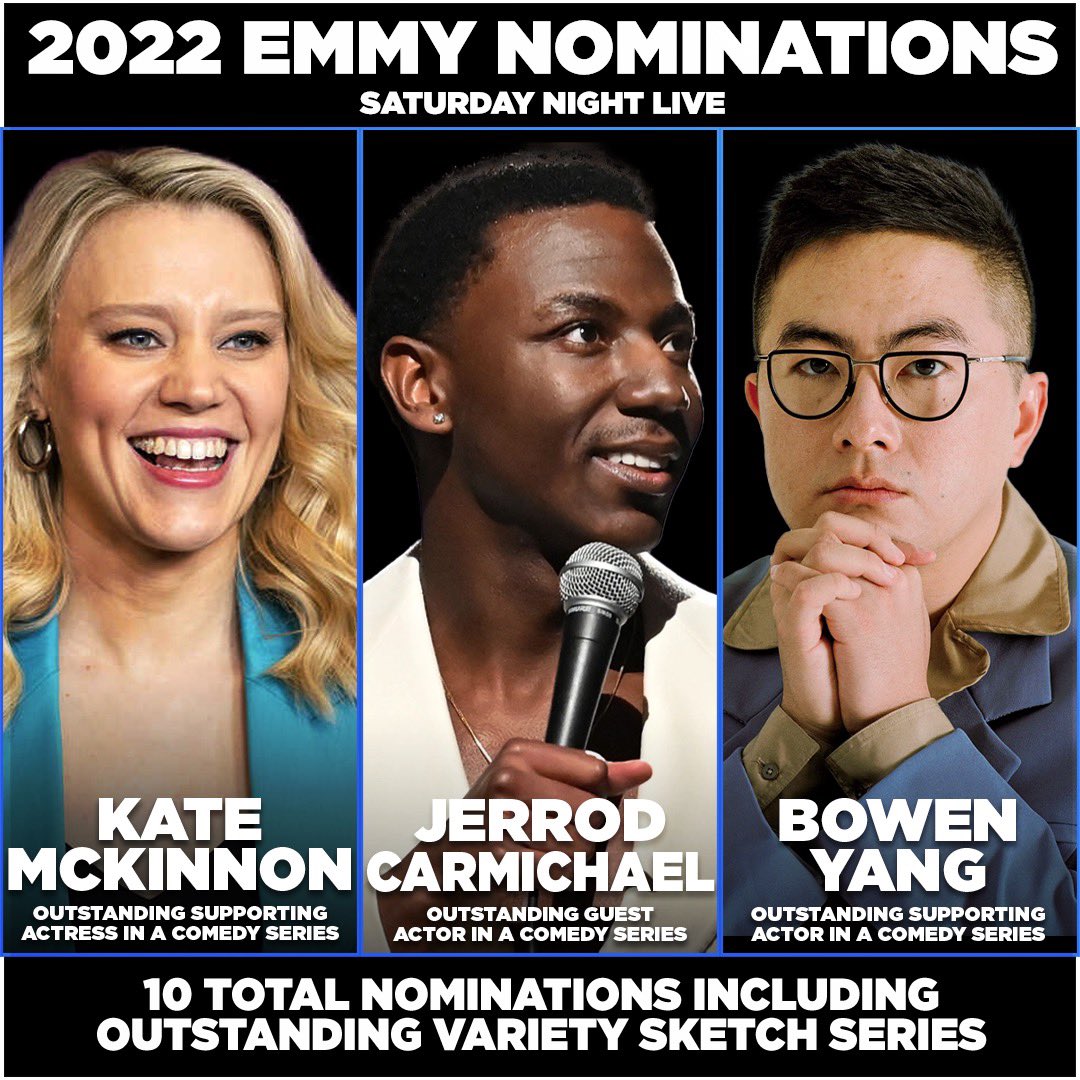 I'm going to be a good environmentalist by recycling my reaction from last year's It's Saturday night, so here are the 21 Emmy nominations for 'Saturday Night Live'.

And 'Saturday Night Live' won eight Emmy Awards last year, including for this category. I expect it will do so again.

Now for the acting nominations, which are less of a sure thing for SNL. 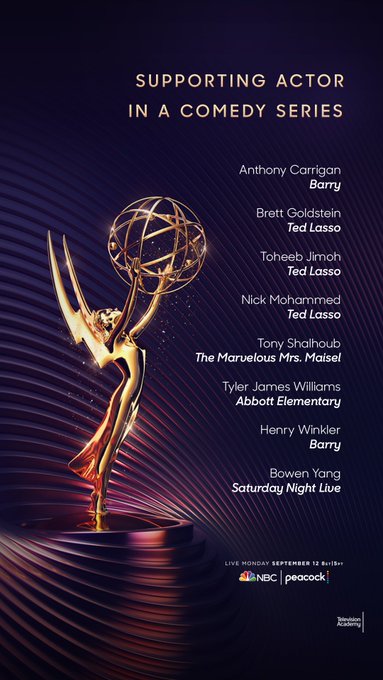 As much as Bowen Yang deserves this nomination and is the only one nominated from "SNL," I don't think he's going to win, as he's up against three previous winners in Brett Goldstein, Tony Shalhoub, and Henry Winkler. I'll handicap their chances and the rest of the nominees from comedy series later. In the meantime, enjoy Weekend Update: A Proud Gay Oompa Loompa on Timothée Chalamet - SNL.

That was hilarious. Congratulations to Yang on his second nomination in this category! 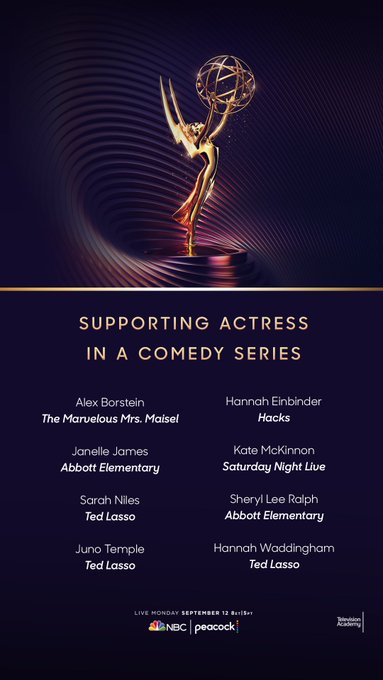 Unlike Yang, Kate McKinnon is a previous winner of this award, but she's competing against last year's winner Hannah Waddingham and two-time winner Alex Borstein, so I don't consider her the favorite. To show McKinnon's talents, I'm sharing Final Encounter Cold Open from her final episode on the show as a regular cast member.

Good luck to McKinnon in her future pursuits! The show and its fans will miss you.

Now for the nominations for acting from 74th Primetime Creative Arts Emmy Awards. 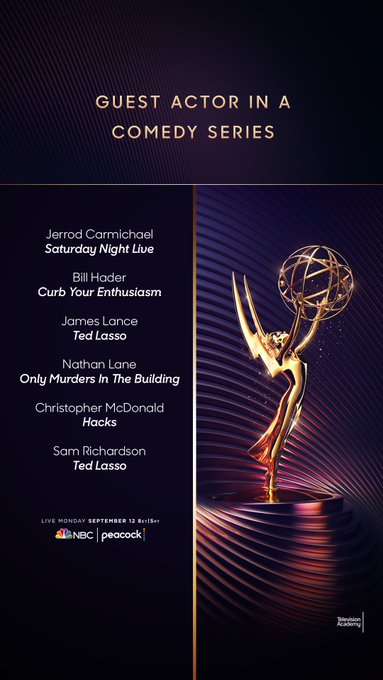 An Oscars seat filler (Jerrod Carmichael) gets interrupted while talking to Will Smith (Chris Redd).

I found that as much horrifying as hilarious, but it did a great job of showcasing Carmichael's talents. Just the same, I suspect Nathan Lane will win for "Only Murders in the Building," especially since he's reprising his role in the second season, which is streaming now.

Follow over the jump for the rest of SNL's nominations honoring the people behind the camera.

Here's a category where "SNL" would be an answer to "one of these things is not like the others."

I think one of the four variety specials featuring music would the favorites, so "SNL" should just be happy to be nominated. To show why this episode earned its nomination, I'm sharing Camila Cabello: Psychofreak (Live) ft. WILLOW.

A lot of commenters remarked that this was better than the studio version. I believe it!

Now for the categories I've examined before, beginning with Trevor Noah examines Manchin deal, monkeypox, and Russia announcing it will leave the ISS plus six Emmy nominations for 'The Daily Show' and its spinoffs.* 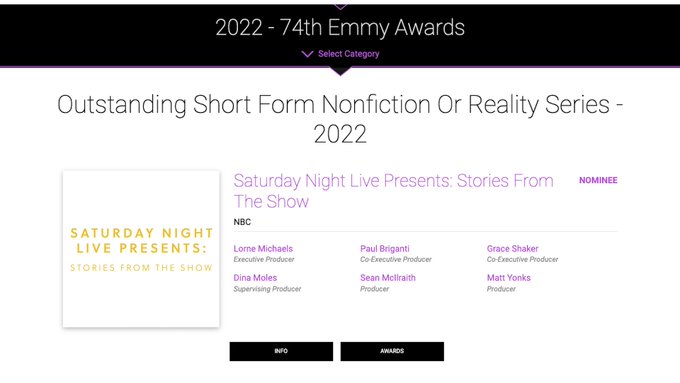 I'm sharing SNL Stories from the Show: Jason Sudeikis to show what the nomination is all about.

Jason Sudeikis reflects on his time with Saturday Night Live as both a writer and a member of the cast.

Two things came through for me, Sudeikis' warmth and Lorne Michaels being the inspiration for Dr. Evil. Just listen to the impression to hear what I mean.

Next, the categories I analyzed in Colbert examines Manchin agreeing to the reconciliation bill that would fight climate change.

Again, "The Late Show with Stephen Colbert" is the only variety talk show nominated in this category, competing against "Saturday Night Live" and three variety specials, all of which feature music. I think of those three will win. I might pick my favorite when I look at variety specials.

That's coming up, but I have something else planned first. See the footnote.* 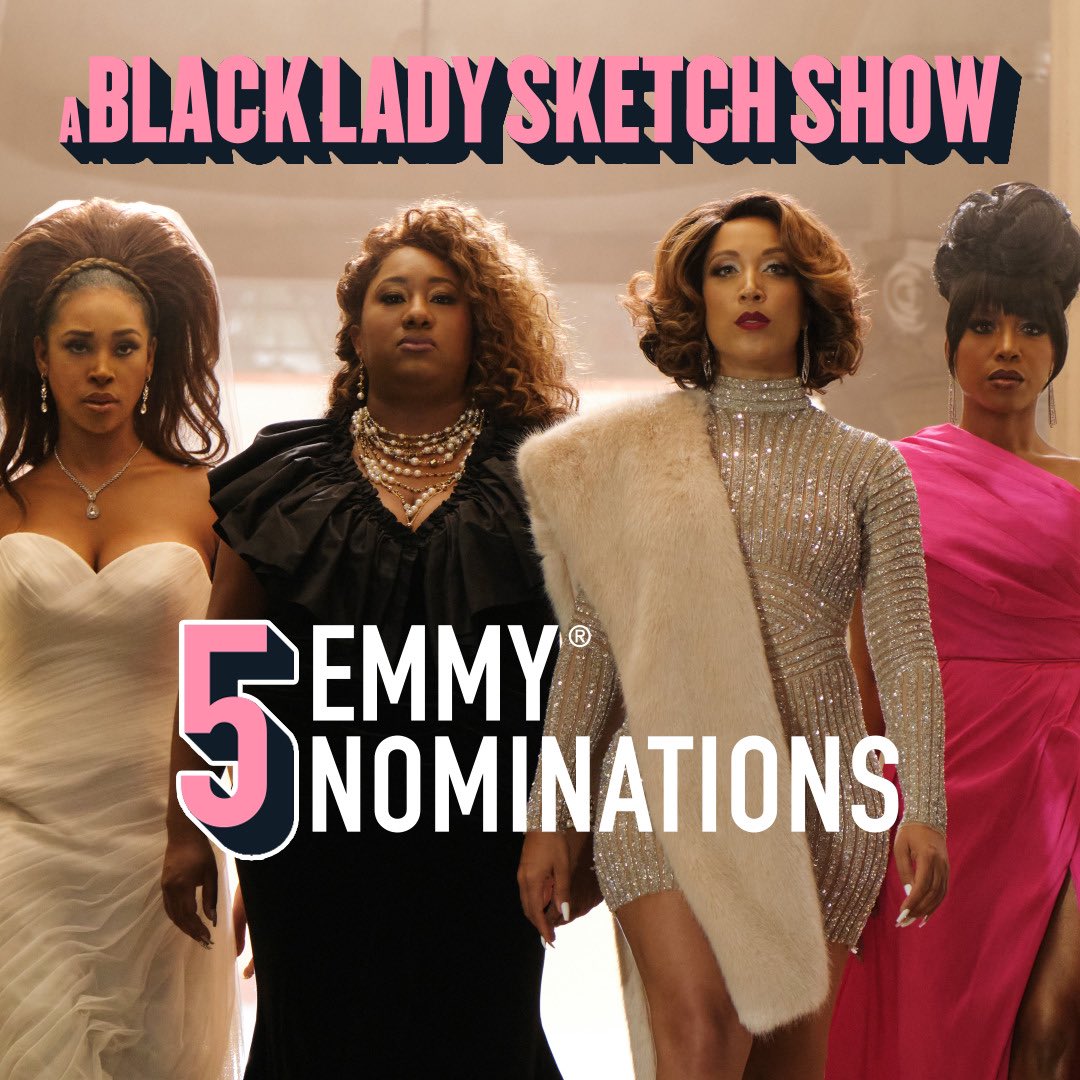 I still do, but I think "A Black Lady Sketch Show" deserves recognition, too, so I'm using one of the show's promotional images from Twitter to illustrate this entry.

Next, the categories in which variety sketch shows earned nominations I examined in John Oliver examines inflation plus 'Last Week Tonight's Emmy nominations. 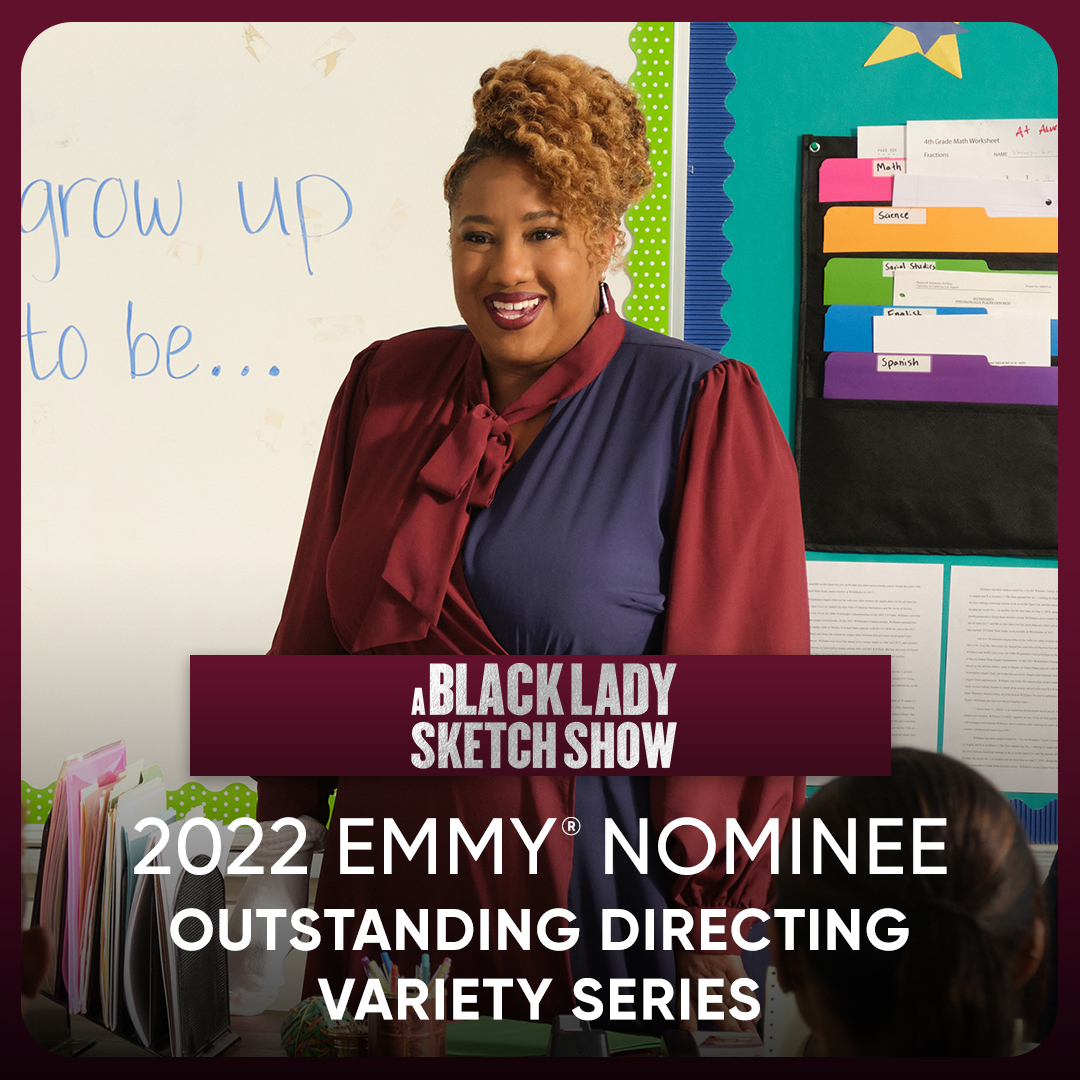 "A Black Lady Sketch Show" may have put out a Twitter image to promote the show's nomination in this category, but I'm embedding Don Roy King and Liz Patrick ('Saturday Night Live' directors) on the 'remarkable tornado' of 'SNL' from Gold Derby.

Congratulations to both King and Patrick on their nominations. I expect both of them will walk away with Emmys for this nomination. 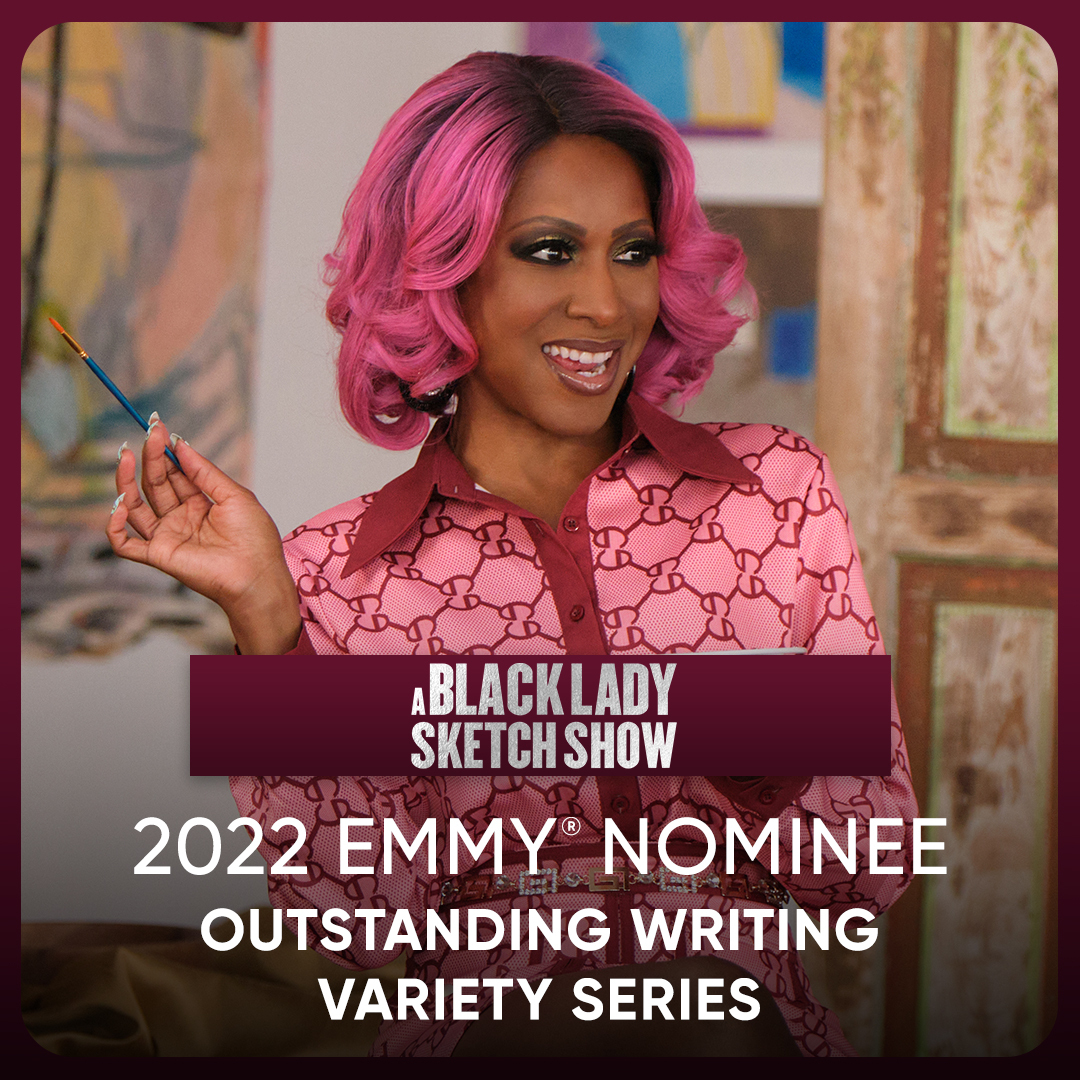 Yes, this is from last year, but I missed embedding it then, so I'm using it now. I'm an environmentalist, so I conserve my resources. Good thing this interview worked for this year, too.

Not only do electorates matter, representation does, too.

*There are actually seven nominations for "The Daily Show with Trevor Noah" and its three spinoffs. I'll get to the one I missed in the next installment of this series. Stay tuned.

Previous posts about the 2022 Emmy Awards
Posted by Pinku-Sensei at 2:10 PM