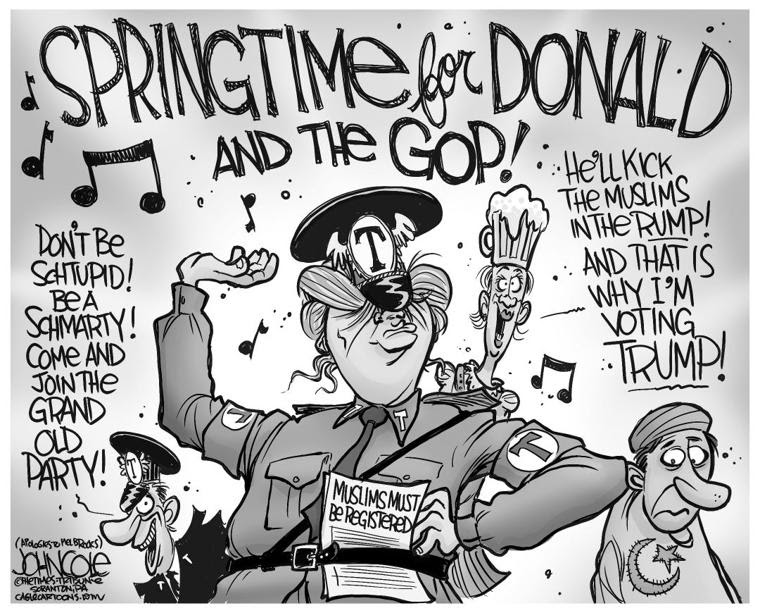 In the wake of Super Tuesday, I present another Trump funny in the vein of Donald Trump dance remix, Darth Trump, and Trump is coming and he's building a wall.  Courtesy of Esquire, here's “Trumped" Starring Matthew Broderick & Nathan Lane.

From the producers who brought you “The Producers,” #Trumped is a new musical starring Matthew Broderick, Nathan Lane, Cloris Leachman and the unlikely candidate himself, Donald Trump.

Of course, it's not all fun and games.  Follow over the jump for more from Esquire plus a video from Vox on Trump's rise.

Jack Holmes of Esquire explains why this video works.


It resonates in two ways. First, it was almost incomprehensible at the outset that Donald Trump could be competitive in the race to be leader of the free world. But like Springtime, his candidacy has been so flamboyantly absurd—and the surrounding environment has been just right—that it has found success. He is vulgar, he is rude. He makes himself and others look silly. People love the show.

Second, there's reason to believe that other candidates in the race (cough, Ben Carson) actually have consultants in the mold of Bialystock and Bloom on staff. There were far too many candidates, especially on the Republican side, that were plainly unqualified with zero chance at challenging for the nomination. Carly Fiorina was fired from Hewlett-Packard and lost a race for senate, so she ran for president? Carson's own adviser said he couldn't absorb "one iota of intelligent information" on Middle East policy. Clearly, some of the people working on these campaigns were looking to make a quick buck before the show closed up and left town.

In the end, Lane and Broderick's bit is incisive and funny. But it's also a sobering reminder that our politics has, for the most part, devolved into a destructive combination of cynicism and absurdity.

Ezra Klein sounds even more alarmed in Donald Trump's rise is a scary moment in America.

We are so busy laughing at Trump that we’ve lost sight of how dangerous he is. Vox's editor-in-chief Ezra Klein explains.
...
Trump is in serious contention to win the Republican presidential nomination. His triumph in a general election is unlikely, but it is far from impossible. He's not a joke and he's not a clown. He's a man who could soon be making decisions of war and peace, who would decide which regulations are enforced and which are lifted, who would be responsible for nominating Supreme Court justices and representing America in the community of nations. This is not political entertainment. This is politics.

Klein's message is one to take seriously, given that Trump has now won primaries and caucuses in ten out of the fifteen states that have voted on the Republican side so far, including seven out of eleven last night.  Remember, The Penguin is a villain.

Welcome to Weimar America.
Posted by Pinku-Sensei at 10:14 AM