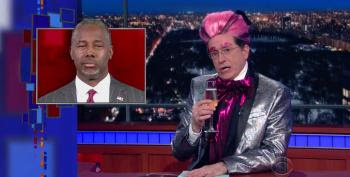 On Sunday, I warned my readers that a regular feature might be delayed.


Stay tuned for the Sunday entertainment entry, which may be delayed until anywhere between tomorrow and Thurssday.  That's happened before.

The Michigan Primary is over and the circus has left town, so it's now time to cash that rain check--or issue another one.  I'll have a proper entertainment entry later, but first here's this shiny object that combines the campaign with one of my favorite dystopian series, Hunger Games.  I present Late Night with Stephen Colbert in Hungry For Power Games: Carson Eversleep.  Looks like I wasn't done with Doctor Pyramid after all.

The sleepiest tribute of all has fallen, and not a moment too soon, as it has always been past his bedtime.

I'll have some more DOOM tomorrow, as it will be the fifth anniversary of Fukushima, but the next week looks fairly festive.  Daylight Saving Time begins Saturday night, followed by Entertainment Sunday, Pi Day, The Ides of March, and St. Patrick's Day.  The next week looks fairly happy, too, as Nowruz, also the blog's fifth birthday, and Purim occur then.  Add in the several weeks of retrospectives over the past year, plus more election coverage, and it will be party time until April.
Posted by Pinku-Sensei at 7:35 AM