'Dump Trump' and 'Arrest Snyder' at the Detroit Republican Debate

I concluded Examiner.com article on Clinton and Kasich endorsements by writing "As for what's next, I'm feeling like writing about the protests outside the Fox Theatre last night instead of the debate itself."  That was my idea for an Examiner.com article, but the local media covered those relatively well.  Besides, I've found another polling story to write about (a fresh angle on Michigan polling?  Yes!)

I begin with WXYZ's Protestors at the Republican debate.  If it moves, it leads!

Protestors converged on the Fox Theatre for the Republican debate.

That certainly conveyed the atmosphere and emotion of the protests, but it almost entirely missed the substance.  For that, I turn to the Detroit Free Press, which reported Hundreds protest outside of GOP debate at Fox Theatre.


Hundreds of protesters waving signs and shouting through megaphones filled the street and blocked traffic Thursday evening ahead of the Republican presidential debate at the Fox Theatre in Detroit, demanding attention be paid to the Flint water crisis and civil rights issues.

Despite the blowing wind and snow, many shouted relentlessly "Flint Lives Matter," and held up brightly lit "arrest Gov. Snyder" signs. Others shouted phrases critical of Republican candidate Donald Trump, such as "Dump Trump," as people entered the Fox.
...
The protesters were from a variety of organizations, including the National Action Network (NAN) and the Fight for $15 organization, which is calling on candidates to support the fight for a $15 hourly wage and the right to form a union without interference. Hundreds of workers marched from Cass Park to the theater, playing drums and holding signs.
...
"There will be no American president that doesn't address the American tragedy that happened in Flint, Mich.," [Rev. Charles] Williams [President of NAN's Detroit Chapter] said. "None of these candidates have said nothing about Flint, Mich. What we're saying is what debate, what conversation can (candidates) have in Detroit or the state of Michigan that doesn't involve Flint? We're calling on Republicans to begin to move and make sure there are shovels in the ground and the people of Flint get safe drinking water immediately."
...
Jessica Spencer, 22, of Bloomfield Hills, said while she's not from Detroit, she felt compelled to come and protest.

"This is everyone's fight," she said, holding a "Say no to Trump" sign. "They're not doing enough. The Republicans need to hear what we're saying and that's that everyone deserves equal rights, good drinking water and  fair wage."

Trump wan't the only target of anger.  So was Governor Snyder. 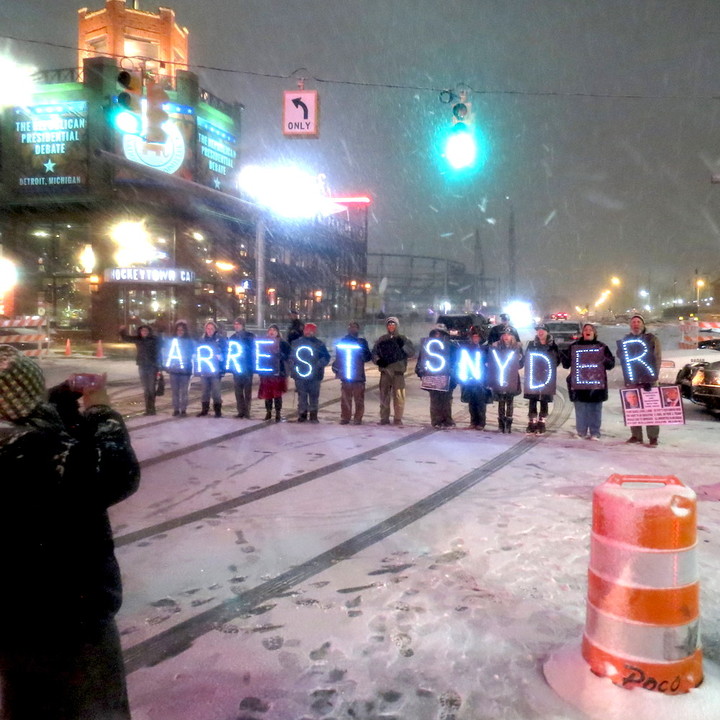 Given what's been going on in Michigan with the the Flint water crisis, I'm not surprised.
Posted by Pinku-Sensei at 1:36 PM