Snyder testifies before Congress about the Flint Water Crisis 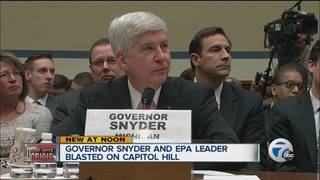 The Congressional hearings on the Flint Water Crisis finally got to their star witnesses, Governor Rick Snyder and EPA Chief Gina McCarthy, on Thursday.  The result was predictable, as WOOD-TV reported in Lawmaker: Gov. Snyder responsible for Flint crisis.

Yes, the Democrats attacked Snyder; I expected no less.  What I also expected, but the title and caption ignored, although the reporter highlighted it, was that the Republicans went after the EPA.  Charlie Pierce of Esquire minced no words about that: Drink in This Republican Hypocrisy From the Flint Water Hearings Today.


[T]he howling hypocrisy of conservative Republicans feigning concern about environmental safety, and the howling hypocrisy of conservative Republicans pretending that they expected the EPA to take care of this crisis, was extraordinarily hard to take. Nine days out of ten, they'd be baying at the moon about regulations strangling business and about devolving federal functions to the states, which are run by people like Rick Snyder. Today, though, rather than confront the complete failure of that entire theory of government in this awful episode, it was time for them to argue that the EPA wasn't tough enough in regulating Snyder's bungling. Where were the jackboots, they seemed to be saying, when the citizens of Flint could have used them.
...
It was profoundly nauseating to listen to Congressman Jason Chaffetz waxing wroth about what was done to the poor people of Flint, smirking his way through his questioning, over and over again, and blaming "career bureaucrats" in the Michigan Department of Environmental Quality for letting down poor Rick Snyder. Chaffetz has had the knives out for the EPA ever since he slithered into Congress. He has a lifetime rating of three percent from the League of Conservation Voters. On at least three occasions in 2015 alone, Chaffetz voted in ways harmful to clean water regulations. He's a climate denier. He's one of the leaders of the movement to prevent the EPA from regulating greenhouse gases. He wants to privatize federal lands for the purpose of exploitation. And his basic point yesterday was that Barack Hussein Obama's EPA didn't do enough to force the Republican governor of Michigan to do his freaking job.

Pierce obviously bought none of what the Republicans were selling.  Instead, he placed blame squarely on Snyder and his policies.


Regardless of who sent what memo to whom and when they sent it, the crisis in Flint is the result of a full implementation and exercise of a philosophy of government that noisy pissants like Chaffetz, Grothman, Carter, and Rick Snyder have proposed as a solution to almost all the nation's problems—government is bad, government bureaucrats are always incompetent, devolve federal powers to the states, and that government is best that is limited and, preferably, run like a business. The two primary contenders for the Republican presidential nomination want to eliminate the EPA. Absent as a cudgel against environmental protections that he wants to gut, the 100,000 people in Flint wouldn't matter a damn to Jason Chaffetz. "A government is not a business and it shouldn't be run like one," said Rick Snyder to Congress, and his tongue did not burst into flames.

About time Snyder figured that out.

Follow over the jump for more on the hearings.

WXYZ covered the hearings as well.  Their report caught not only Snyder being grilled, but also the specter of the Attorney General's investigation of the crisis in Snyder on the hot seat in Washington.

Governor Rick Snyder was on the hot seat as he testified on the Flint water crisis in Congress.

No, it's not over, just like the Courser-Gamrat affair (pun intended) isn't over; both have been indicted, a story I need to follow up on.

Also, this entry isn't over.  By my wife's special request, I'm sharing this video of Representative Elijah Cummings tearing Snyder a new one courtesy of my friend Egberto Willies of the Coffee Party: Congressman rips into incompetent GOP governor & policies that poisoned Flint's water supply.

Egberto quotes the centerpiece of Cummings' statement at his blog:


“Governor Snyder has been described as running the state of Michigan like a business,” Rep. Elijah Cummings said. “Well, what if this was a business. What if a CEO ran a company that sold toys laced with lead that children put in their mouths. What if those children were poisoned as a result. And what if that CEO ignored warnings for more than a year as those kids got sicker and sicker and sicker. There is no doubt in my mind that if a corporate CEO did what Governor Snyder’s administration has done, he would be hauled up on criminal charges. The board of directors would throw him out. And the shareholders would revolt. This is similar to what is happening now to Governor Snyder.”

I doubt the Attorney General's investigation will indict Snyder.  Michigan Attorney General Bill Schuette does not want to run against a Govenor Calley.  However, the FBI is under no such restriction.  They might get a grand jury to indict him.  If so, I wonder if he could get either Kwame Kilpatrick or Rod Blagojevich as room mates at Club Fed.  Nah, I shouldn't think that far ahead; I'll likely end up disappointed.

Stay tuned for posts about the Vernal Equinox, Le Nain Rogue, and the Sunday Entertainment feature.
Posted by Pinku-Sensei at 11:13 AM