Trump vs. Sanders, the top post of the fifth year of Crazy Eddie's Motie News 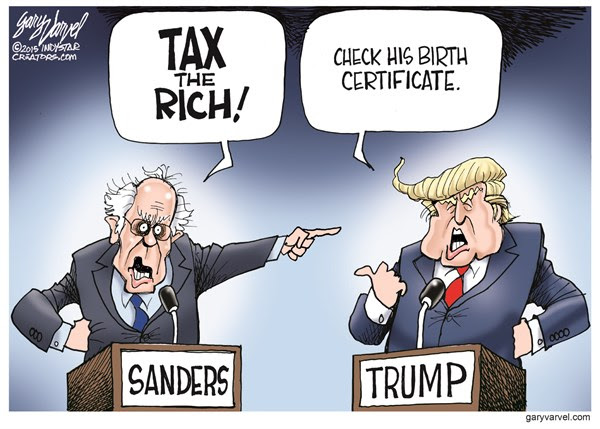 I concluded Statistics for the fifth year of Crazy Eddie's Motie News by telling my readers to "Stay tuned for a entry about the top post of last year."  It only took until the end of the week, but here it is.

The most read entry of the fifth year of Crazy Eddie's Motie News was Trump thinks Sanders is the right enemy.  It ended the blogging year with 7107 page views, 7247 according to the raw counter.  This puts it not only in first for the year but first in the history of the blog by a wide margin; the second most read entry according to the default counter is more than 4500 page views behind.  I'll be a good environmentalist and recycle how it earned this status from Record page views, comments, and 100th follower: Monthly meta for October 2015.


"Trump thinks Sanders is the right enemy" was the single most viewed post of the month as well as the most read entry in the history of the blog with 7111 page views, 7422 according to the raw counter.  This entry was shared at the Coffee Party Facebook page.  It drew 1369 page views to the blog the first hour and 1150 page views the second hour.  The total number of page views for the day was 6316, a record, and for the post 7110 over the next week, another record.

Since that entry, the continuing rivalry between Sanders and Trump was reignited when the torches and pitchforks came out for Trump last night, as many of the protestors were Sanders supporters.  I documented Trump's response in a comment to Kunstler's Bull Run.


Trump isn't ignoring Bernie.  He's blaming Bernie for the protesters and threatening to send his supporters over to Bernie's events.  He thinks Bernie organized the protests, a claim Bernie has denied.  In fact, Bernie called Trump a liar and tweeted back that his supporters would be welcome to see "an honest politician."

On the one hand, this could lead to a whole series of Weimar moments like last Friday's.  On the other, the best way to attract a crowd is to start a fight.  On top of Sanders winning Michigan, this direct conflict could help Bernie.  Unfortunately, it will also draw more people to Trump.  Sigh.

Trump has moved on to attacking Ted Cruz, but Sanders continues to say the following about Trump in his stump speeches.


Sanders attacked Donald Trump later in his address.  In particular, he went after Trump's attempts to use fear and bigotry to divide the nation.

"We will together defeat Trump because the American people understand that bringing our people together trumps divisiveness," he said as quoted by the Michigan Daily. "The American people will defeat Trump because they understand that a community helping each other, standing with each other in our times of need, trumps selfishness."

"And the American people will defeat Trump most profoundly," Sanders concluded as quoted by MLive, "because they know what every religion in the world teaches, whether it's Christianity, Judaism, Islam or Buddhism, and that is ultimately: Love trumps hatred."

Stay tuned for entries about the second most read post of the past year, the Sunday entertainment entry, a humorous take on nuclear meltdowns, and an update on the Flint Water Crisis.  Also, follow over the break for a linkspam about the top entries of the past four years.