An accident in Oregon for Hagfish Day

Hagfish Day is observed annually on the third Wednesday in October.

Hagfish are considered to be the ugliest of species. The idea behind Hagfish Day is to encourage everyone to look beyond the exterior of the Hagfish and appreciate how highly evolved they are.

In general, O.K., but in detail, no.  I'm sure there are uglier vertebrates.  Also, while hagfish are just as evolved as any other organism on this planet, they are the descendants of the first branch off the vertebrate family tree.  In fact, they branched off so early that they don't even really have vertebrae!  They're the reason why cladists call the group Craniates instead of vertebrates; the most primitive group to have vertebrae are lampreys.  See the phylogenetic diagram below. 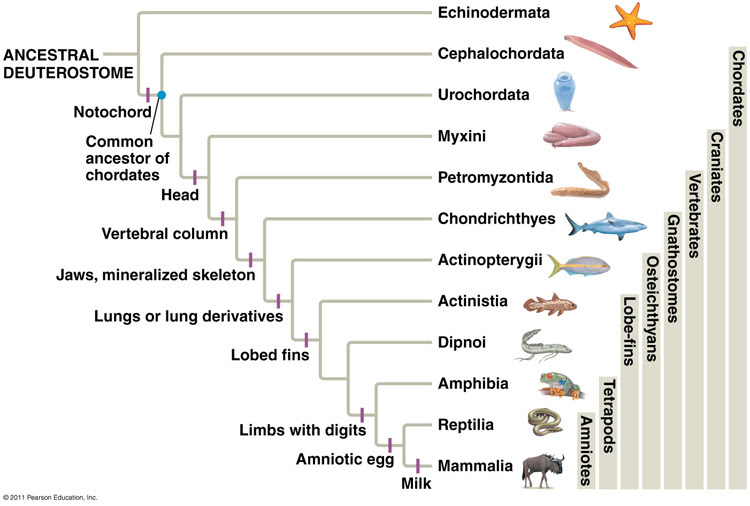 However, I did not decide to celebrate Hagfish Day to give a lecture.  Instead, I'm doing so to note that hagfish got in the news this summer.  Watch Sloppy slime eel spill stops traffic from USA Today, which I showed to one of my classes this summer. USA Today took down that video, so here's the National Geographic video instead.


All USA Today could muster was "Talk about a traffic jam!"  National Geographic had a more informative description, if a less interesting video.

A car accident caused thousands of hagfish to spill on the highway, coating the road—and even a car—with slime. Hagfish, also called slime eels, secrete huge amounts of an extremely slippery mucus when stressed. The Oregon Department of Transportation used firehoses and a bulldozer to clear away the goo. The fish were likely destined for Asia, where many countries consider them a delicacy.

That was a fun video to show my students, but I think I might show The Hagfish Is the Slimy Sea Creature of Your Nightmares from the Smithsonian Channel to next year's class, either instead or in addition.

The hagfish is a slime-emitting ocean-dweller that's remained unchanged for 300 million years--and it shows. It has a skull (but no spine), velvet smooth skin, and a terrifying pit of a mouth that’s lined with rows of razor-sharp teeth.

That shows and tells a lot more about the animal itself and not just how it interacts with humans.

By the way, not only did I write yesterday that I'd celebrate Hagfish Day today, but that I'd feature the Emmy Awards that "The Rachel Maddow Show" won for its coverage of the Flint Water Crisis and its interview of Kellyanne Conway.  I've changed my mind.  I plan on posting an entry about an Emmy winner that covered the opiate crisis, but it wasn't one of the ones I listed in 'Body Team 12' and 'Extremis' both nominated for Outstanding Short Documentary plus other science, health, and environment nominees; it was one I missed entirely.  Stay tuned.
Posted by Pinku-Sensei at 10:13 AM