The New York Times reminded me yesterday of Adam Serwer's column last year in The Atlantic that The Cruelty Is the Point with the headline Shoot Them in the Legs, Trump Suggested: Inside His Border War.

Privately, the president had often talked about fortifying a border wall with a water-filled trench, stocked with snakes or alligators, prompting aides to seek a cost estimate.

Why am I reminded of villains in movies, from Indiana Jones... 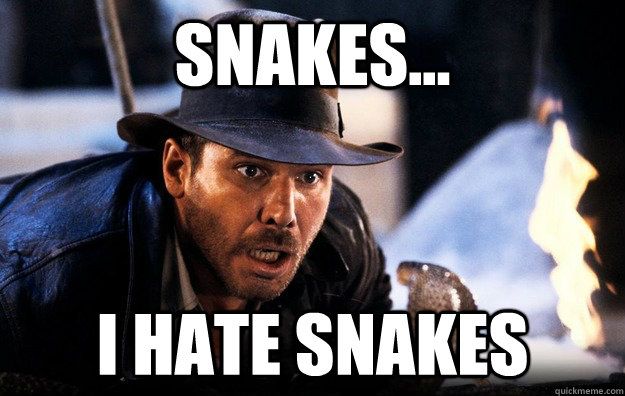 to Captain Hook and the tick-tock crocodile from "Peter Pan"... 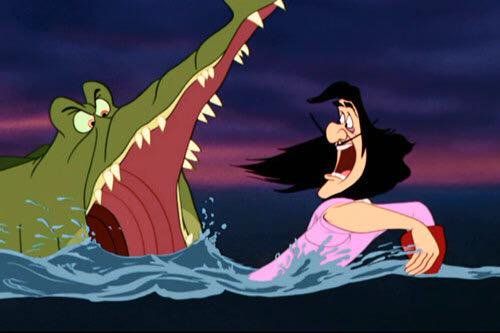 and finally Dr. Evil's wish for sharks with laser beams on their heads from "Austin Powers, International Man of Mystery." 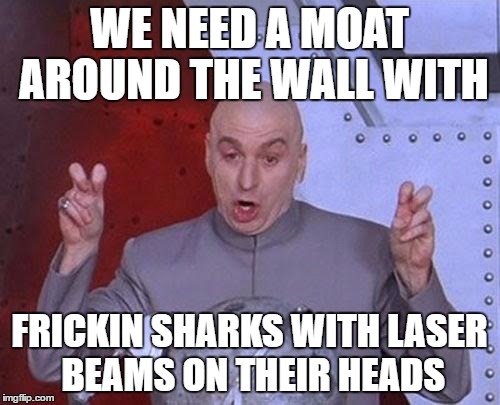 There's more, but it's not funny.

He wanted the wall electrified, with spikes on top that could pierce human flesh. After publicly suggesting that soldiers shoot migrants if they threw rocks, the president backed off when his staff told him that was illegal. But later in a meeting, aides recalled, he suggested that they shoot migrants in the legs to slow them down. That’s not allowed either, they told him.

The article described the closest Trump came to getting his wish several paragraphs down.

The happiest he had been with Ms. Nielsen was a few months earlier, when American border agents had fired tear gas into Mexico to try to stop migrants from crossing into the United States. Human rights organizations condemned the move, but Mr. Trump loved it.

It gets more disturbing from there.

That level of cruelty and depravity reminds me of Baron Vladimir Harkonnen from "Dune."  It turns out I found just the image for the resemblance. 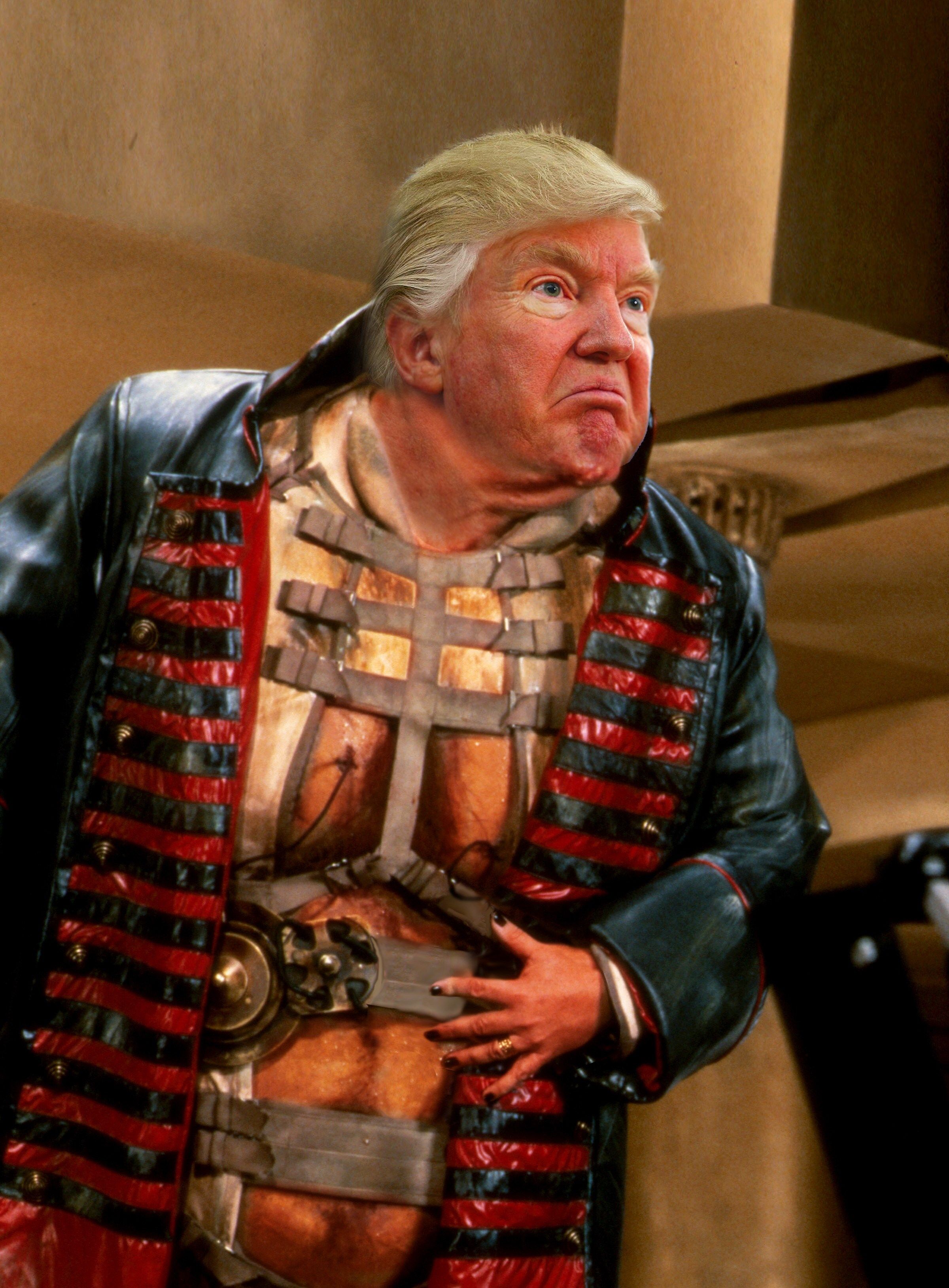 Since The Penguin is reminding me of silly but still dangerous villains from fantastic and futuristic films, I decided to look up The Evil Overlord List to see how many of the items apply to him.  Follow over the jump.

Most of the 100 rules don't apply, but about a dozen do.  Here they are with my comments.

When I employ people as advisors, I will occasionally listen to their advice.

As the article demonstrates, he is listening to his advisors — occasionally.

I will not have a son. Although his laughably under-planned attempt to usurp power would easily fail, it would provide a fatal distraction at a crucial point in time.

Too late, as he has three.  However, I don't think they're a threat to him.  Too bad.  Don Jr. or Eric providing a "distraction at a crucial point in time" would probably be the most useful thing either of them would ever do.

I will not have a daughter. She would be as beautiful as she was evil, but one look at the hero's rugged countenance and she'd betray her own father.

Again, too late, as he has both Ivanka and Tiffany.  I'm not worried about Ivanka betraying her dad; maybe Tiffany would instead.

One of my advisors will be an average five-year-old child. Any flaws in my plan that he is able to spot will be corrected before implementation.

I forgot about Barron.  He might be able to fill this role, but I suspect Melania wouldn't let him.

I will maintain a realistic assessment of my strengths and weaknesses. Even though this takes some of the fun out of the job, at least I will never utter the line "No, This Cannot Be!! I AM INVINCIBLE!!!"

Oh, boy, is he ever in violation of this one.

I will dress in bright and cheery colors, and so throw my enemies into confusion.

All naive, busty tavern wenches in my realm will be replaced with surly, world-weary waitresses who will provide no unexpected reinforcement and/or romantic subplot for the hero or his sidekick.

Like he'd ever get rid of his eye candy.

I won't require high-ranking female members of my organization to wear a stainless-steel bustier. Morale is better with a more casual dress-code. Similarly, outfits made entirely from black leather will be reserved for formal occasions.

I don't think anyone should tell him about this rule.  It might give him ideas.  As it is, while Snopes says that the claim that there is a dress code for women in the Trump White House that requires them to wear dresses or skirts and blouses is unproven, it is known that Trump likes that look.

I will maintain a healthy amount of skepticism when I capture the beautiful rebel and she claims she is attracted to my power and good looks and will gladly betray her companions if I just let her in on my plans.

It is well known that flattery will get people anywhere with Trump.

This would probably go double if a woman was laying it on thick.

I will make sure I have a clear understanding of who is responsible for what in my organization. For example, if my general screws up I will not draw my weapon, point it at him, say "And here is the price for failure," then suddenly turn and kill some random underling.

I'm not sure Trump would actually follow any of this, whether it's knowing who's really responsible for what or not punishing the wrong person for failure.

I will not strike a bargain with a demonic being then attempt to double-cross it simply because I feel like being contrary.

For once, I think Trump will actually follow this, which means that Vladimir Putin is safe from betrayal.

If my advisors ask “Why are you risking everything on such a mad scheme?”, I will not proceed until I have a response that satisfies them.

Good luck with that.

I will see a competent psychiatrist and get cured of all extremely unusual phobias and bizarre compulsive habits which could prove to be a disadvantage.

If I ever talk to the hero on the phone, I will not taunt him. Instead I will say that his dogged perseverance has given me new insight on the futility of my evil ways and that if he leaves me alone for a few months of quiet contemplation I will likely return to the path of righteousness. (Heroes are incredibly gullible in this regard.)

Trump not taunt an adversary?  As if.

Finally, to keep my subjects permanently locked in a mindless trance, I will provide each of them with free unlimited Internet access.

I'd say do this, except the price would be having to read his Twitter account.  I'll pass.

By the way, I'm not the first person to see how well or badly Trump is following the Evil Overlord List.  Katya Lysander at Medium did it first with all 100 rules and decided the Trump wasn't an Evil Overlord.  Not yet, anyway.  Just the same, I suggest my readers surf over and have a good laugh or maybe even 100 of them.