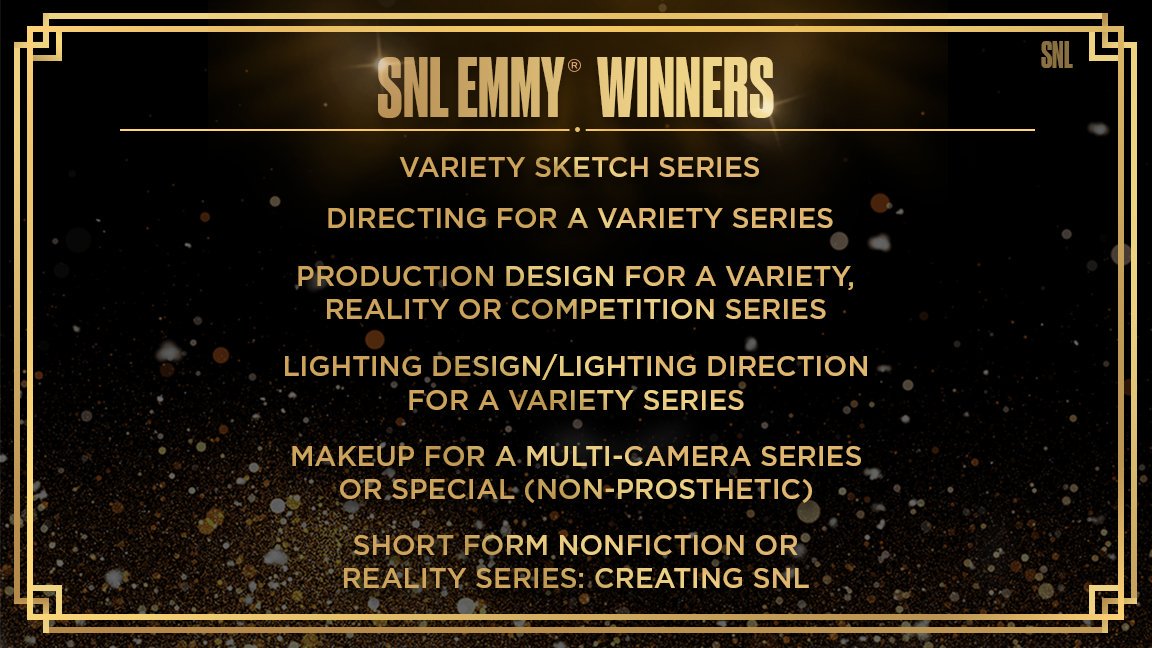 I told my readers at the end of Celebrate 'Last Week Tonight' winning four Emmy Awards with 'Psychics', "Speaking of SNL, that show will be the subject of my next entry about the Emmy winners.  Stay tuned."  SNL won six Emmy Awards, four at the Creative Arts Emmy Awards and two at the Primetime Emmy Awards.  I'll list all of them over the jump.  Right now, watch Lorne Michaels Emotionally Accepts The Emmy For Saturday Night Live | EMMYS LIVE! 2019 from Fox.

Lorne Michaels reminisces about SNL's long-running history and emotional moments last season as he accepts the Emmy along with the cast of the show.

Appropriately for October, this clip will turn into a pumpkin later this month when Fox takes it down and the Television Academy uploads its copy onto its YouTube channel.  I'll replace it then.

The show itself was not alone in winning a Primetime Emmy.  Don Roy King won a statuette for Outsanding Directing for a Variety Series.  Watch "SNL" Director Don Roy King Celebrate His Ninth Emmy Win from IMDB.

Longtime #SaturdayNightLive director #DonRoyKing confirms that no matter how many times you win an #Emmy, it never get[s] old.

Congratulations!  Here's to yet another great season.

Speaking of which, as impeachment is the big story of the week, it's no surprise that SNL had their own comedic take on it.  Watch two clips from last night's show on the topic, beginning with Mike Pence Impeachment Strategy Cold Open.

Rudy Giuliani as The Joker made a good punchline.  If I call Trump The Penguin, then someone has to be The Joker.

Next, Weekend Update: Trump Brushes Off Impeachment Concerns not only covered impeachment, but also alligators in the moat for the wall.

I felt better about the week's news after having a good laugh at it, just like I almost always do, although I thought the joke about Bernie Sanders' heart attack was a bit cold.  Funny, but cold.

Follow over the jump for all of the Emmy Awards SNL won.

Here are the other nominees and my takes on SNL's chances from 'Saturday Night Live' leads sketch variety series nominees with 18 Emmy nominations.

This field looks a lot like last year's, so I think the result will be the same; SNL will win.

As I predicted, SNL won.

"Saturday Night Live" won this award last year and the year before, so I'm considering it the favorite.  I'd be surprised if "Last Week Tonight" pulls off an upset.

Again, SNL won, as I forecast.

"Saturday Night Live" won this award last year and I'm pretty sure it will win it again.

I was right to be confident in SNL's chances, as it won again.

...
From the competitive angle, there is no returning winner, so I can't handicap the contest that way.  However, I think the two most popular programs are SNL and "RuPaul's Drag Race."  I suspect the latter will split its vote, giving the former the inside track.  It helps that "Creating Saturday Night Live" is the only former nominee, albeit from two years ago.

That turned out to be a good way to handicap the competition, as "Creating Saturday Night Live" won.

SNL is the returning winner, so I consider it the favorite.

I forgot one category, Outstanding Makeup for a Multi-Camera Series or Special (Non-Prosthetic).  SNL won against "Dancing with the Stars," "RENT," "RuPaul's Drag Race," "So You Think You Can Dance," and "The Voice."  SNL won this award last year, so if I had handicapped the contest, I would have considered it the favorite to repeat.  Too bad I didn't write about it; otherwise, I'd have called all of SNL's wins.