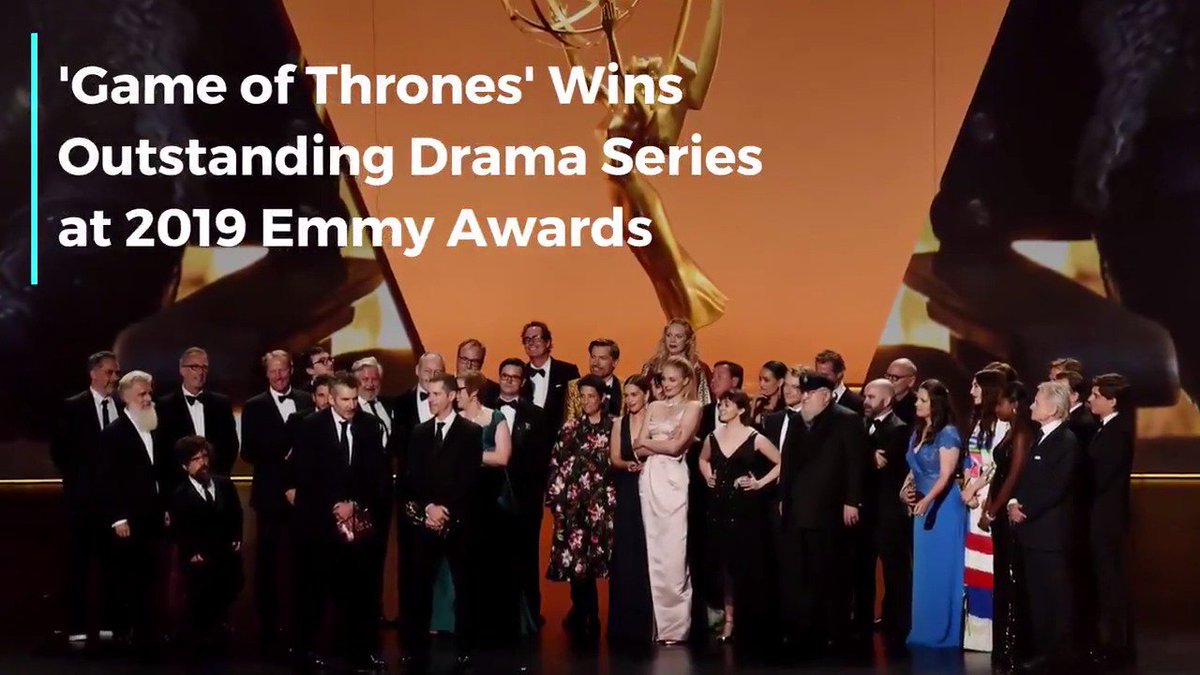 "Veep" wasn't the only program to receive a farewell tribute at the Emmy Awards for its final season.  "Game of Thrones" did as well.  Watch A Tribute To Game Of Thrones.

Seth Meyers introduces a tribute to the end of Game of Thrones.

Also like "Veep," the "Game Of Thrones" cast presented an award, in this case Supporting Actress In Limited Series Or Movie.

The Game of Thrones cast takes the stage to present the award for Supporting Actress in a Limited Series or Movie.

To see how that award turned out, read 'Chernobyl' dominates Limited Series with ten Emmy Awards.

The similarities end there, for unlike "Veep," "Game of Thrones" repeated its Emmy Awards from last year, earning two for the night and a total of twelve for the season.  I called both of them in Outstanding Drama Series Emmy nominees examine politics and family dynamics, beginning with Outstanding Drama Series, writing "I'm sure "Game of Thrones" will win this award one last time, repeating last year's victory."  Watch Game Of Thrones Wins Best Drama Series.

I support that message from Dinklage, especially since I've made a point of emphasizing the importance and portrayal of acceptance and diversity in entertainment.  His speech came up in Emmy Winners for 'Game of Thrones' Full Press Room Speeches from The Hollywood Reporter.

Mark Kelly, brother of Scott Kelly, the subject of "A Year in Space," himself a subject of "Beyond a Year in Space," and candidate for U.S. Senate in Arizona, guessed 90% of the ending?  I'm impressed.  I'm also impressed that Kit Harington was able to handle the final question about the controversy around the ending as well as he did.  Congratulations to Harington and the rest of the crew and good luck on their future endeavors in show business!

In addition to "Game of Thrones," other Emmy winners in drama also tackled themes involving government and politics, particularly "Ozark," "Killing Eve," and "Succession," while "Pose" examined social issues.  Follow over the jump for their awards. 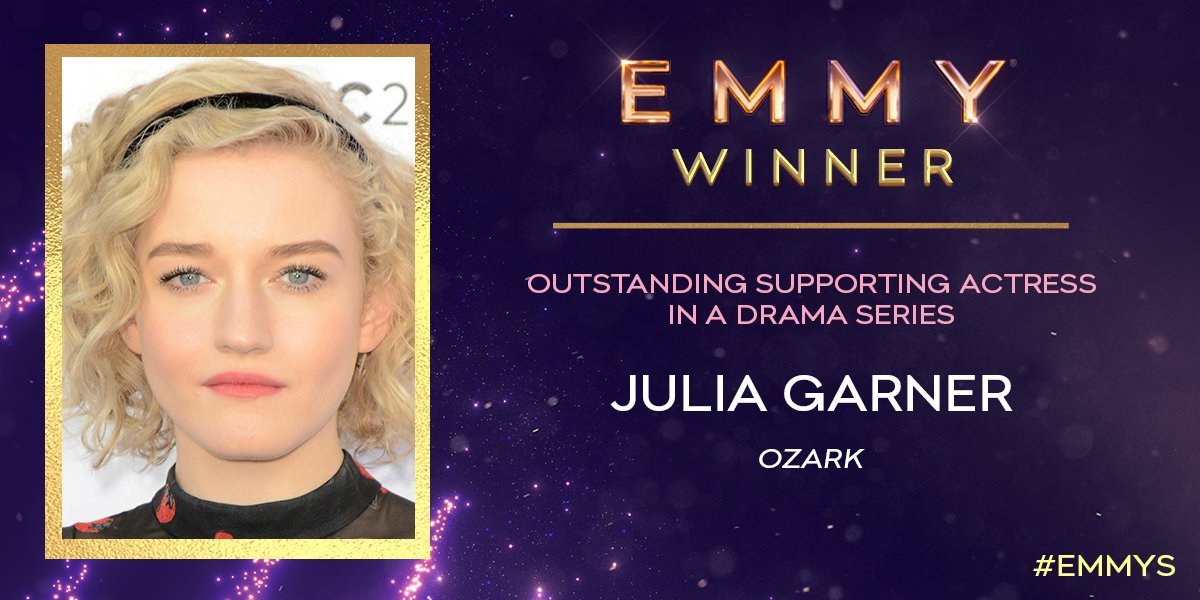 "Ozark," my favorite nominated drama series, also took home two trophies at the Primetime Emmy Awards.  I didn't call either, but that's because my head overruled my heart; I was disappointed last year, so I decided not to repeat my experience.  I should have gone with my heart.  At least I acknowledged my feelings for Outstanding Supporting Actress in a Drama Series.

The only one I considered voting for at the Saturn Awards was Maisie Williams and that [was] because Julia Garner from "Ozark" wasn't nominated but I don't think either are favored.  Instead, I expect Lena Heady will win.

Surprise!  Julia Garner won and I am thrilled.  It was the first Emmy Award for "Ozark."

I didn't even mention the actual winner for Outstanding Directing for a Drama Series when I handicapped the nominees.


Adam McKay is the one Emmy nominee who also has an Oscar nomination to his credit, which might count for something, but David Nutter won this award in 2015 for "Game of Thrones," which I think counts for more.  If not him, then I wouldn't be surprised if one of the other two directors nominated for "Game of Thrones" episodes wins instead.

I'm sure there have been other times when I was happier to be wrong about who would win an entertainment award, but I can't name one right now.  Congratulations to Jason Bateman on his first Emmy Award!

I blew the call for Outstanding Lead Actor in a Drama Series, but I should have known better, as the clip I used for the category last month showed Billy Porter giving a riveting performance.  I should have mentioned him just for that.

Once again, my personal favorite is Jason Bateman of "Ozark," but I don't think he'll win.  I'm also not sure that there will be enough "Game of Thrones" enthusiasm to sweep Kit Harington onstage to accept the award; he couldn't even beat Sam Heughan of "Outlander" at the Saturn Awards.  Instead, I'm going with the only previous winner for the same role, Sterling K. Brown, who won this award two years ago. 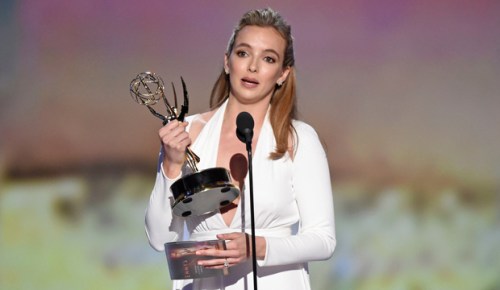 I at least got the right show for Outstanding Lead Actress in a Drama Series, but the wrong actress.

If it were up to me, I'd vote for Laura Linney {"Ozark"), Sandra Oh ("Killing Eve"), Viola Davis ("How to Get Away with Murder"), or Robin Wright ("House of Cards"), in that order.  I even voted for Sandra Oh at the Saturn Awards.  I doubt the Television Academy voters agree with me.  On the one hand, Viola Davis is the only previous winner for the same role, winning four years ago.  On the other hand, Emilia Clarke might just get swept onto the stage.  On the gripping hand, a lot of people thought Sandra Oh should have won last year and did win a Golden Globe, so my second choice has a chance, even if her co-star Jodie Comer might split the vote.

Jodie Comer didn't just split the vote, she won it.  Surprise and congratulations! 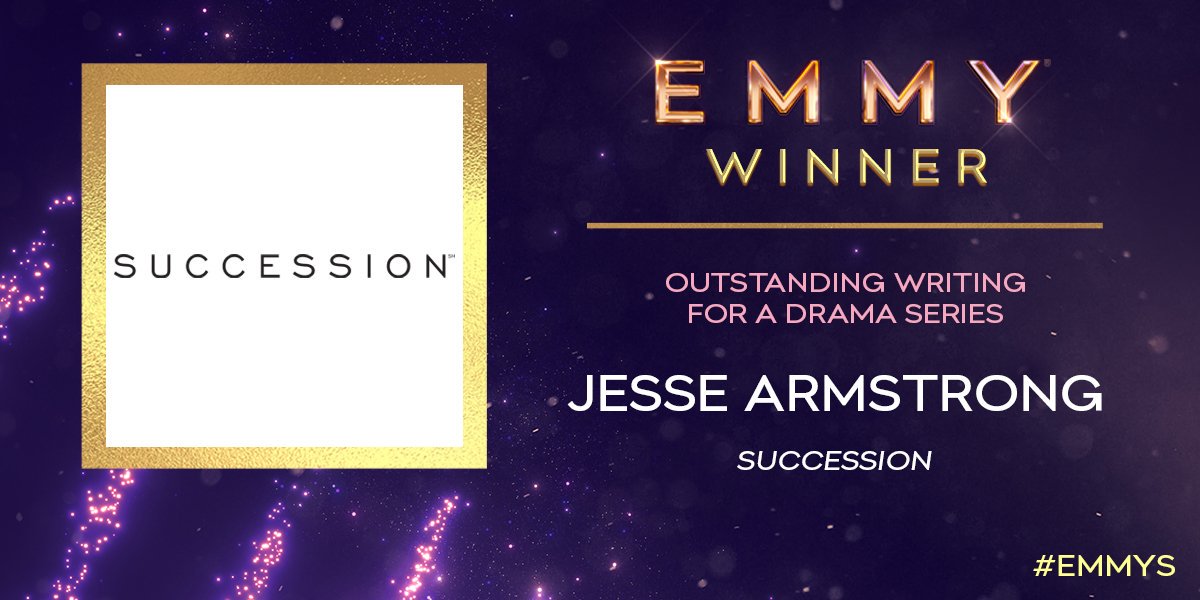 I also blew Outstanding Writing for a Drama Series.


I think this is between David Benioff and D. B. Weiss for "Game of Thrones" and Bruce Miller and Kira Snyder for "The Handmaid's Tale," as Benioff, Weiss, and Miller are all previous winners of this award.  Given a choice, I pick Benioff and Weiss.

This is one case where I suspect the controversy around the final season caught up with "Game of Thrones."  Instead, it went to "Succession" for its second Emmy.  As I wrote above for Comer winning for "Killing Eve," surprise and congratulations!

Now to remind my readers of the awards already won by drama series at the Creative Arts Emmy Awards.

"Star Trek Discovery" finally won an Emmy for Outstanding Prosthetic Makeup for a Series, Limited Series, Movie or Special.  As Doug Jones said at the Saturn Awards last week, "it takes a village to make a Kelpian."  Congratulations!

I predicted that "Succession" would win Outstanding Original Main Title Theme Music and it did.  Considering that Nicholas Britell earned an Oscar nomination for "If Beale Street Could Talk" makes his win even less surprising.

Congratulations to all the drama nominees and winners for giving their viewers such engrossing examinations of politics, society, and family dynamics.  Here's to seeing how they perform at the Golden Coffee Cups for Best Drama Series about Politics and Government.