Halloween science: Cyclops and other monsters inspired by fossils 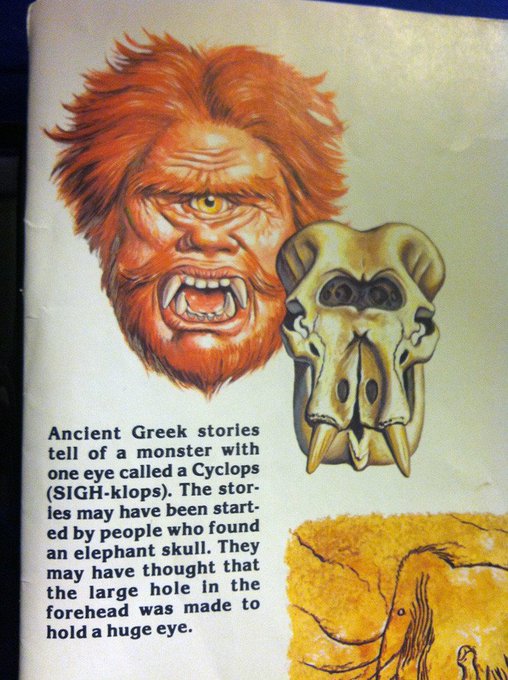 Happy Candy Corn Day!  I couldn't resist more spooky science and engineering for Halloween even though I promised this year's song by Broken Peach.  That's still coming.  Right now, I'm sharing two videos by PBS Digital Studios on a Halloween theme.  The first is from PBS Eons asking Were These Monsters Inspired by Fossils?

People have been discovering the traces and remains of prehistoric creatures for thousands of years. And they’ve also probably been telling stories about fantastic beasts since language became a thing. So, is it possible that the monsters that populate our myths and legends were influenced by the fossil record?

I've heard about griffins and cyclops being inspired by Protoceratops and mammoth fossils respectively, but woolly rhinos inspiring dragons is a new one on me.  It's always a good day when I learn something new.

Speaking of cyclops, PBS Eons invited their viewers to "Check out Monstrum's full episode on Cyclops."  Watch Cyclops: The Origin Story of this Terrifying One-Eyed Giant, the companion to the PBS Eons video.

You might recognize the one-eyed giant from Ancient Greek myths, but the cyclops has appeared in stories across the globe for thousands of years. Some elements of the legend do differ, but there are striking similarities in all of these “Blinded Ogre” tales.

In this episode, you’ll hear all about Homer’s Polyphemus and Hesiod’s one-eyed blacksmiths, but also a little about the role paleontology has played in creating monsters. Join Dr. Zarka and special guests Kallie Moore and Blake de Pastino from Eons to learn all about the surprising fossil inspiration behind the cyclops.

I remember voting for this channel last year.  I'm glad it was created, so I've subscribed.  Here's to learning more about monsters.

I'll be back with the latest from Broken Peach.  In the meantime, Happy Halloween!
Posted by Pinku-Sensei at 9:06 AM