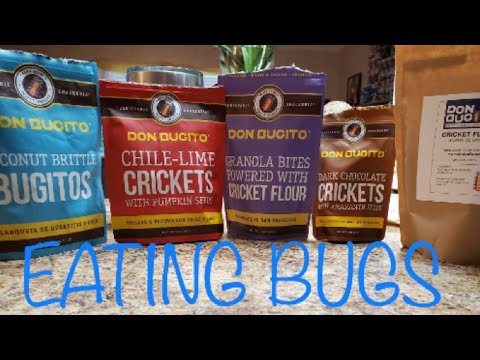 I had no idea how much I needed a break from blogging about both impeachment and the Emmy Awards until I saw a video about eating bugs show up on my YouTube notifications.  Shiny!  Since I haven't written about the subject since Bill Nye thinks eating bugs will save the world more than a year ago, I'm sharing Verge Science's Taste-testing crickets from a high-tech insect farm.

Around the world, two billion people eat insects regularly. In the US and Europe? Not so much. But, some entrepreneurs think it’s time. We take a tour of the startup cricket farms trying to kickstart a new industry, and sample some insect snacks ourselves.

Just like the video, I began my serious examination of entomophagy by asking What will nine billion people eat for protein?*  Also like the video, I referenced the U.N. report in Now the U.N. says edible insects are the future of food.  As for the boom, that coincided with Cracked on insects as a food of the future.  The bust coincides with my not writing about the topic for more than a year.  As my readers can see, I've been following this story all along, even if I haven't been as diligent about it as I have about the Retail Apocalypse.  I'm glad to see another revival of interest in the topic as well as a quality report on the state of cricket farming.  I will recommend this Verge Science video to my students and not just to gross them out.  They will definitely learn something from it.  I know I did!

*My less serious first post about the topic was Travel is broadening, especially the food about my personal experiences eating insects in Mexico.  That was just about me and the bugs, not about the broader implications of the practice for the environment.
Posted by Pinku-Sensei at 12:45 AM