Pier 1 Imports closing stores, a tale of the Retail Apocalypse 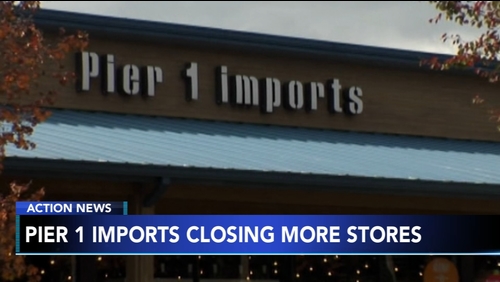 In this episode we take a look at Pier 1 imports. They've been in and out of the news lately for all the wrong reasons.

Erik did the math and calculated that Pier 1 Imports could close about 140 stores.  That figure is part of the headline of an International Business Times article from last month, Pier 1 Imports Store Closings: Retailer Prepares To Close More Than 140 Locations.

The list of Pier 1 Import (PIR) store closures may grow as the company reported a $100.6 million loss in the second fiscal quarter of the year and is looking to cut as much as a reported 15 percent of its locations.

Pier 1 interim CEO Cheryl Bachelder said during the company’s Q2 earnings call on Wednesday that active discussions have been going on with landlords with some progress being made on rent terms (via The Dallas Morning News). Despite these efforts, the retailer is preparing to close more than 140 locations if can’t get its landlords to cooperate, the news outlet reported.

One of the locations that closed early this year was the closest one to where I live.  Watch Pier 1 Imports Closed, and Office Depot Closing - Southfield, MI from April 11th of this year.

We interrupt Gen2 Week to bring you this breaking news story.

Pier 1 Imports has closed their store at the Tel Twelve shopping center, in Southfield, Michigan. The sign is gone, and a poster in the window reads that the store is closed. They still have stores in Auburn Hills, Northville, Royal Oak, and Troy, among other Metro Detroit cities.

In a related development, Office Depot is closing their store at Tel Twelve as well. The store is scheduled to cease operations on 5/18/2019, and clearance sales are in full swing. This may be due to this store's close proximity to the Farmington Hills location, which was recently converted from OfficeMax to Office Depot.

My wife and I bought our dining room chairs there a few years ago, so this news came as a bit of shock as the Retail Apocalypse hit close to home.  When my wife heard about Pier 1's troubles, she thought that Wayfair was the major competitor, not Target, as Erik suggested.  I'll go with my wife.

I'm sure I'll have more about the Retail Apocalypse, but only after I post a Sunday Entertainment Feature.  I'm considering either a follow-up to Oscar nominees at the 2019 News & Documentary Emmy Awards or this year's edition of the Critics' Choice Documentary Awards followed by four days celebrating Halloween.  Stay tuned.

*I know I teased a post about Tulsi Gabbard's campaign drama yesterday, but I decided that was too much work.  Maybe later.
Posted by Pinku-Sensei at 12:57 PM