I begin with a video of "The Commandant's Own" from March of this year, which is the best I could find of the 2018 Marine Corps Drum And Bugle Corps production "Furia."


For my readers who want a video from the Drum Corps International Championships, I have DCI Finals 2018 || "The Commandant's Own" USMC Drum and Bugle Corps || synth cam. 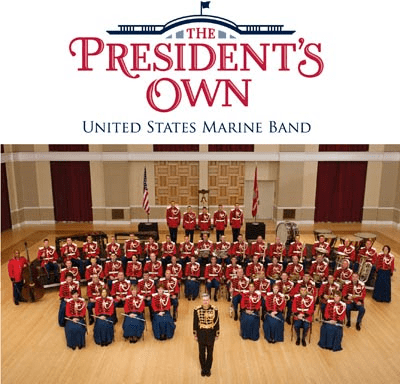 As a bonus, I'm sharing the United States Marine Band, AKA "The President's Own," performing "March of the Women Marines" by Louis Saverino, also from March 2018.

On March 11, 2018, the Marine Band presented a Living History program titled Marine Corps Women’s Reserve Band Tribute. The program told the story of the talented and adventurous women who served our country in a most unique and unprecedented manner. Author of the book Bands of Sisters: U.S. Women’s Military Bands During World War II, Dr. Jill Sullivan served as a guide through the personal accounts of those very women who blazed a trail for many to follow. The Marine Corps Women’s Reserve Band of Camp Lejeune was established under the watch of “The President’s Own” to support bond drives and was active during World War II from 1943–45. In 1944, the ensemble even sat in for one of the Marine Band’s popular “Dream Hour” broadcasts, a program that will be reenacted in its entirety as part of this concert. The performance took place in Schlesinger Concert Hall at Northern Virginia Community College in Alexandria, Va. Conducted by Capt. Michelle A. Rakers.

While this concert didn't explicitly celebrate the event, it very nearly coincided with the 45th anniversary of women being included in "The President's Own" in 1973.  Even more to celebrate!

Stay tuned for a report on the winners of Best Political Documentary nominees at the 2018 Critics' Choice Documentary Awards.
Posted by Pinku-Sensei at 12:11 PM