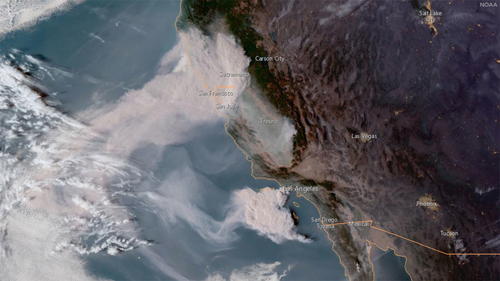 While I've been busy with national and Michigan stories, I've been avoiding writing about a major story that is taking place where I grew up, the latest destructive fires in California.  No more, as I found out last week that the home where I grew up was in a mandatory evacuation zone.  In the 25 years I lived there, that never happened.  In addition, I don't recall my family ever telling me that had happened during the three decades I've lived in Michigan until this past week.*  When I write that this story hits close to home, I mean it!

I begin with Popular Science, which uploaded This is What Wildfires Look Like from Space.

Satellites have captured images the wildfires currently devastating California. The Camp fire is the deadliest and most destructive wildfire in the state's history. Meanwhile, the Woolsey and Hill fires are raging in southern California. The size and destructiveness of the blazes can be seen by NASA satellites.

When I wrote 2018 on track to be fourth-warmest ever, I quoted Newsy observing "The heat certainly contributed to California's intense wildfire season."  Popular Science agrees with that assessment, as do I.  I have no patience for views that deny that, including the President's.

Follow over the jump for video reports about each of the fires currently or recently burning, beginning with the Camp Fire.

The death toll has risen to at least 71 in Northern California's Camp Fire. About 1,000 people are reported missing. That blaze is now 50 percent contained after consuming more than 145,000 acres. Just outside of Los Angeles, the Woolsey Fire 78 percent contained after burning 98,000 acres. Now, dense smoke from those fires is smothering parts of the state with what has been described as "the dirtiest air in the world." Meg Oliver reports.

The headline of the AP article at Talking Points Memo reads Death Toll Rises To 76 In California Fire, With Nearly 1,300 Unaccounted For, so five more bodies have been found since yesterday.  I wouldn't be surprised if the final death toll surpasses 100.

Also, the postponement of the Stanford-Cal game until December 1 stands out to me, as it relates directly to what I wrote seven years ago in What motivates Americans to act.

America is quite clear about its screwed up priorities­. My experience has convinced me that the surest way to get Americans to act is to mess with their entertainm­ent.

America, or at least Cal and Stanford, decided to postpone their entertainment in the name of safety.  In addition, ESPN reported Cal canceled Thursday's men's basketball game against Detroit Mercy because of unhealthy air quality in the region brought on by wildfires.  That tells me how severe the university sees the air quality crisis and how bad the air really is.

Next, CBS Los Angeles reports on the fire that placed my childhood home inside the mandatory evacuation zone, as Woolsey Fire Leaves Behind Powerless Homes, Crumbling Roads.

The destructive blaze not only burned down hundreds of homes, but left impassable roads and collapsed bridges. Cristy Fajardo reports.

Next to rebuilding the burned out homes and businesses, the power lines and roads will be the longest lasting infrastructure problems.  At least they can be replaced.  What can't be replaced are the three people who have died in the Woolsey Fire.

CAL Fire reported Friday that the 4,531-acre Hill Fire was 100 percent contained. It has destroyed four structures and damaged two more. No civilians or firefighters were hurt but an investigation is underway into the cause of the blaze.

I hope they catch the person responsible.

*I case anyone is wondering, the house is O.K.  It was more than a mile from the edge of the fire at its greatest extent.