I last wrote about a voter suppression tactic in 'Last Week Tonight with John Oliver' on felon disenfranchisement for National TV Talk Show Host Day.  It's time to examine another.  Watch Vox explain Why American voter registrations are disappearing.

And how to avoid the purge.
...
Voter purges are a means of removing ineligible voter registrations from the rolls — meant to clean up the system. But what happens when aggressive purges end up getting rid of the registrations of eligible voters?

Critics say states like Georgia and Ohio - purging through “exact match” or “use it or lose it” laws - are disproportionately eliminating thousands of minority voters from the system.

What states are doing them, how do they work, and what should you do if you find out you’ve been purged?

May my readers have avoided "The Purge," and not just by refusing to watch the movies and limited TV series. 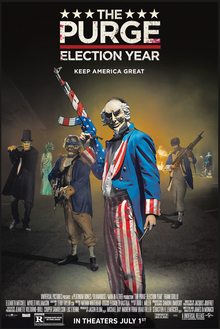