Deval Patrick and Michael Bloomberg at On The Issues

I promised graphs of Michael Bloomberg's and Deval Patrick's ideological positions from On The Issues four times this week.  As the week is almost over and I have time to research and create the graphs, it's time to fulfill that promise.  Since I examine Democratic candidates from left to center, I begin with the more liberal of the two late-comers to the contest, former Massachusetts Governor Patrick. 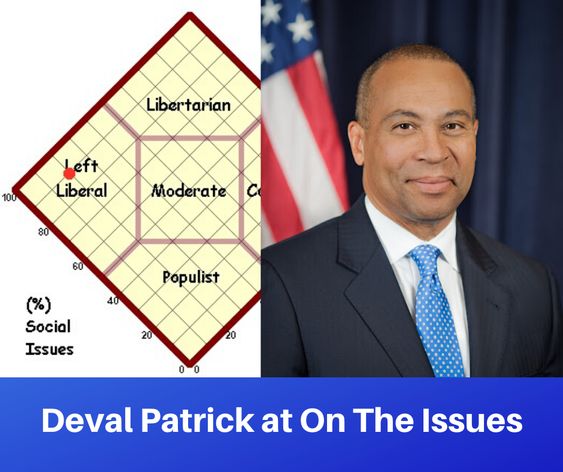 Despite his moderate reputation, On The Issues designates Patrick as a "Hard-Core Liberal" with an economic score of 23 and a social score of 90, tied for second most liberal socially with Joe Sestak and Marianne Williamson.  However, using my methodology of ranking the candidates first by their economic score and then by their social score, Patrick currently ranks as the 12th most liberal active member of the Democratic field, two places to the right of the median candidate, which is now Cory Booker, whose scores at On The Issues are still 18 economic and 80 social.  This is very close to Bill de Blasio's vacated position on the Nolan Grid, so Patrick gets a graphic all to himself in a position that is no longer occupied.  Flanking Patrick to his left is Tom Steyer in 11th with an economic score of 20 and a social score or 75 and to his right is Michael Bennet with an economic score of 25 and a social score of 73.  I guess Patrick may actually deserve his moderate reputation, despite what On The Issues thinks. 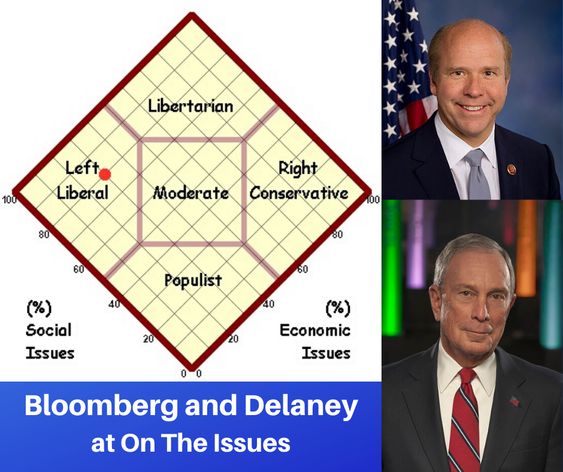 On the other hand, Michael Bloomberg has no problem being labeled as a moderate, as On The Issues considers him to be a Libertarian-Leaning Progressive with an economic score of 33 and a social score of 78.  This makes him the 18th most liberal candidate in the field to the right of Steve Bullock, whose economic score is 30 and social score is 70, and to the left of only Tulsi Gabbard, whose economic and social scores remain at 35 and 85, respectively.  Even Bloomberg can't outflank Gabbard to her right.  Bloomberg also manages to share a graphic with John Delaney, whose scores of 28 economic and 83 social places him three places to the left of Bloomberg, but on the same point on the Nolan Grid when rounded to the nearest multiples of 10.  I think the two of them belong together.

Having looked at the latest scores of all the candidates, it's time to post an update of the entire field.  I'll get to that next week.  Stay tuned.
Posted by Pinku-Sensei at 5:16 PM