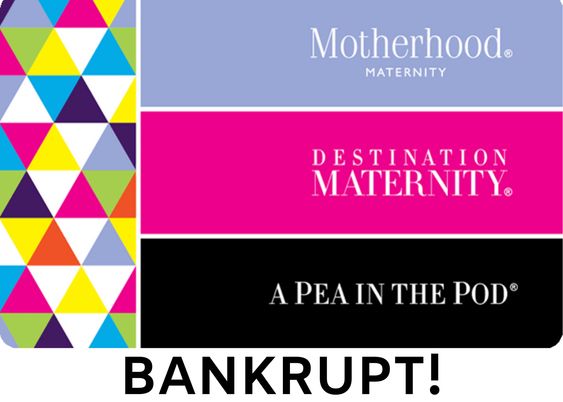 While my tales of the Retail Apocalypse usually intersect with online shopping, particularly Amazon, I found one that has more in common with lower birth and fertility rates, the bankruptcy of Destination Maternity, which is also the parent company of Motherhood Maternity and A Pea in a Pod.  Watch Destination Maternity to close 183 stores in Chapter 11 bankruptcy.

Nice Hand took the text of the slideshow video from a USA Today article, Destination Maternity to close 183 stores in Chapter 11 bankruptcy.

The retailer operates stores under several brands, including Destination Maternity, Motherhood Maternity and A Pea in the Pod.

The company had 446 stores in the U.S., Canada and Puerto Rico as of Aug. 3. It also operated 491 shops-within-a-shop at various department stores and baby specialty retailers.

The company plans to close 183 stores after already shuttering 27 recently, according to a court filing. Bankruptcy allows companies to escape unprofitable leases.

...the company, in a court document, blamed the retail industry's turmoil, declining birth rates, high rents and leadership turnover for faltering. The company has had five CEOs in the last five years.

Yes, declining birth rates.  Business Insider featured that angle in Bankrupt Destination Maternity is on the brink of collapse — and declining birthrates may be to blame.

US birthrates hit a record 32-year low in 2018 after dropping 2% from 2017, according to the Centers for Disease Control and Prevention. Over the past two years, the dip has negatively impacted a variety of companies, from Toys R Us and Babies R Us to consumer-packaged-goods companies like Kimberly-Clark and Procter & Gamble that sell diapers and other products for babies.

"While competition from online retailers and other widely discussed factors may have had some role to play, Destination Maternity's declining net sales in recent years have tracked fairly closely with the sharp decline in births in the United States," Lyman Stone, an advisor at Demographic Intelligence advisor, said in a statement.

Once again, I'm being a good environmentalist and recycling.

On the one hand, the U.S. is doing its part to slow down population growth.  On the other hand, [this means] a possible shrinking economy in the future, which is bad for business as usual.  It's time to be a good environmentalist and recycle what I wrote last year.

Here's to hoping the U.S. learns how to thread that needle.