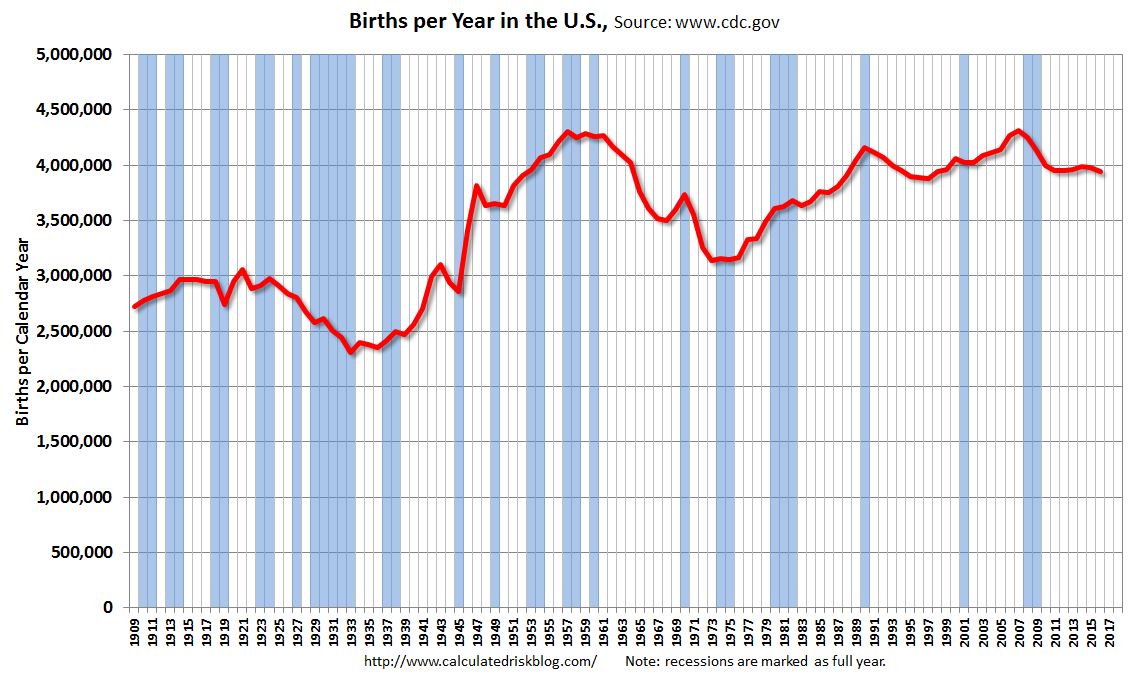 Happy Father's Day!  Last year, I used Stephen Colbert to mock Alex Jones over his custody battle.  This year, as I wrote  in Life expectancy down for a second consecutive year in the U.S., I am "writing about the lower birth rate for Father's Day," even though that is usually considered a concern of mothers.

The least apprehensive and most thoughtful report I could find on the issue is The surprising thing about the declining U.S. birth rate from PBS NewsHour.

More than 3.8 million babies were born in the U.S. last year, but the birth rate drop was the largest one-year decline since 2010. Why hasn’t the downward trend changed direction, even though economic conditions have improved? Amna Nawaz explores some of the factors with Hans-Peter Kohler of the University of Pennsylvania.

Kohler is the calmest expert I've seen interviewed on this topic.  On the one hand, he's saying that there is no reason to panic just yet, as lots of well-off countries have even lower birth rates, so the U.S. is actually becoming more normal and that we are not yet at levels where low birth rates are a serious economic concern.  On the other hand, birth rates can drop far enough that they will cause problems that social policy can't fix.

In reality, it's not the birth rates that concern me; the graph above from Calculated Risk shows that, even adding in the drop between 2016 and 2017, total births were lower in 1997, not a time I recall widespread concern about not enough babies in the near future.  It's the fertility rate.  The graph below from Mother Jones shows it at a record low, well below replacement rate.  With an increased death rate and a lower immigration rate, that will cause the population of the U.S. to stop increasing sometime this century.

I have been in favor of zero population growth for as long as I can remember.  However, I'm not sure the U.S. economy is set up for a stable or slowly declining population, a point I made in the Hipcrime Vocab: Why Slowing Population Growth is a Problem.  We are going to have to figure how to do so.  Otherwise, I might live long enough to experience the wisdom of the saying "Be careful what you wish for; you might get it."
Posted by Pinku-Sensei at 12:00 AM