Vox on Spygate updates 'Trump's...vulnerability for conspiracy theories,' a top post for the seventh year of Crazy Eddie's Motie News 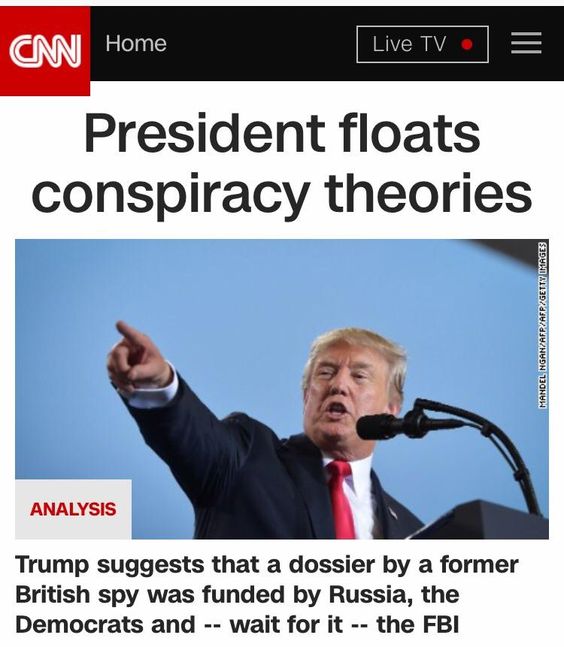 The 27th most read entry of the seventh year of this blog was Trump's wiretapping claim shows his vulnerability for conspiracy theories from March 6, 2017.*  It finished the blogging year with 3235 total raw page views, 377 of which were earned before March 21, 2017, so 2858 of them belonged to the seventh year.  It was also the second most read entry during April 2017 with 2634 default page views during the month.

Before I describe how this entry earned its readership, I'll let Vox update the story with Trump invented a fake spy scandal. People will still believe it.

It's a tactic the president has used before, and it works.
...
President Trump calls it calls it “spygate:” the allegation that the FBI and democrats put a spy in his campaign to help Hillary Clinton. It’s not true.

Top [R]epublicans like Speaker Paul Ryan have even disputed the president. But even though it’s a conspiracy theory, millions of Americans will still believe it. It’s a playbook he has used before.

“Spygate” is an attempt to delegitimize the FBI and special counsel Robert Mueller’s investigation. If the American people lose trust in them, they won’t believe whatever the investigation finds. It’s working.

The next entry will be about Bill Nye and The Resistance.  I plan on posting that tomorrow.  Stay tuned.

Follow over the jump for the footnote and a linkspam of previous entries in this series.

*This is actually more than 'Last Week Tonight With John Oliver' examines corporate consolidation after winning four Emmy Awards with 2849 raw page views, so that entry is really 28th overall.  It is still 24th among entries actually posted during the seventh year of blog, so I won't have to correct that statistic in the comments to The Primetime Emmy Awards for the seventh year of Crazy Eddie's Motie News.

Previous entries about the top posts of the seventh year of this blog.